Childish champs taking over the Contest

ON12355 Posts: 135 ★★
December 2018 in General Discussion
Alright I can't help but notice the trend occuring in last months in MCOC when new champions are introduced. Simply put, juvenile. Childish. Dumb.
Are you really satisfied with the champs you are offering? Because let's face it, your choices are ridiculous. I don't have to go too far. This month says it all. I mean, really? That guy Night Thrasher looks like Batman with skateboard and Darkwhatever is just another Archangel-Vulture hybrid.
I dare to say I know Marvel characters quite good, I don't say I know it all, not by far, but I'm not one of the "I saw Avengers, I know Marvel" kind of guy either, but I have to admit, those two characters you are adding? Never heard of them. And I know I'm not alone. If there are characters that remain unknown for most of the fan base, sometimes there is a reason. There is SO many much more popular much more relevant and iconic characters to choose, people are begging for them for years here (and I don't necessarily mean F4, I know there were some right issues behind this particular characters) yet what you give us? Yes, Night Thrasher and Darkhawk, another two characters N O B O D Y asked for. 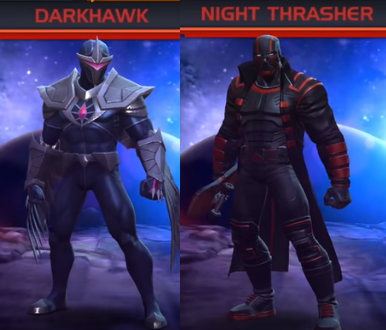 Why another two, you ask? Let's talk about your golden spoiled boy Aegon and especially, his awful nemesis with such a cool and creative name The Champion. What a great champion for marvel contest of champions, right? I know this may be subjective, but while Aegon turned out pretty good regarding his appearance (he does look kinda cool and fits MCOC just fine), Champion is, how to put it mildly...Awful? Terrible? I really can't find the right words. He is just like macho-man Genie from Disney, it's is hilarious and sad at the same time, he really looks like something 4 years old children would designed.
And again - I have to point out here - nobody asked for any of them. I can see the reason you created them anyway, well Aegon at least, it's more than obvious you needed to make your own imprint in Marvel and thus you made him very self-serving king of the contest, totally overpowered and key champion so Kabam rules their own realm with their own champion, I get it. Yet still, nobody asked, that's the fact.

My big problem is your very poor choice of characters to add to contest, my biggest problem though is how you actually make them. That's where it starts to get really stupid. I know I can't yet confirm what tier are NT and DH actually gonna be but from their description, I think it's safe to say they are not going below Low-Demi-God tier, well, you actually didn't release champ like that for months now.
And while it's fine not to release trash champs, it creates very weird perspective in MCOC overall, where guys like Skateboard Batman, Genie from the lamp or Mexican nobody with flaming bat are FAR better champions than iconic characters like Phoenix, Magneto, Deadpool and many many others - I can't even name them all.

If you don't see the problem in that, it makes no sense to elaborate further. But I hope you see the reason. People really don't want noname characters in god tier and their beloved ones in trash can or not at all. It should be the other way around. Think about it. I think it would be more than very well accepted by MCOC community if you just wont release new characters some month and take the old ones higher where they should be instead. I mean, what do you think people would prefer for Christmas - newly added Night Thrasher and Darkhawk, or buffing Magneto/Deadpool for example? I think it says it all.

One last a little offtopic point at the end - your tendency to constantly increasing number of champs with fun and interactive autoblock is too obvious and very laughtable. I'm sure there are other ways to make money. Try fair offers for a one, maybe?