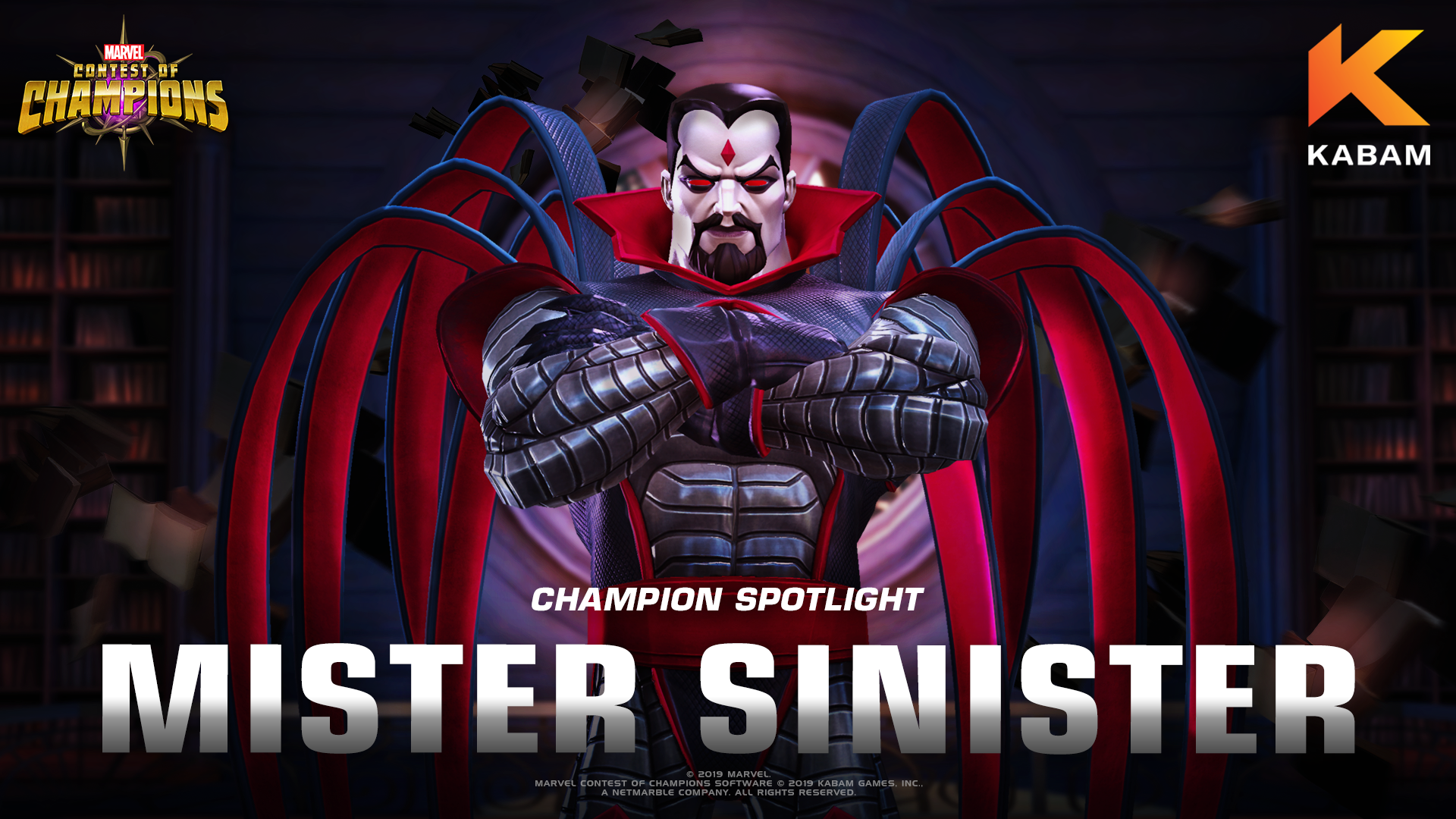 Check out Mister Sinister’s preview bundle on February 11th at 10AM PDT for a chance to add him to your team early, or wait for the Arenas to start on February 21st at 10AM PDT!

About Mister Sinister:
Nathaniel Essex, a scientist in the latter half of the 19th century, pledged loyalty to the mutant-demi god Apocalypse in exchange for activation of his dormant X-Factor. Donning the moniker of Mister Sinister, Essex began to engineer bloodlines in the hope of creating the perfect mutant. His attention would eventually focus on two particularly gifted children, Scott Summers and Jean Grey. In command of the Marauders, a band of mutants that follow him, Mister Sinister has been the mastermind of many schemes and plots, not the least of which was the birth of Cyclops and Madelyne Pryor's child, Nathan Summers, also known as Cable.

Summary:
Mister Sinister will live up to his name, especially as a defender. His ability to Regenerate damage taken from Critical Hits will allow this Mutant to survive some of the heaviest hits in the Contest. As a master of genetic manipulation, Mister Sinister’s other abilities allow him to improve himself while countering the abilities of his opponent.

Molecular Regeneration - Passive
Developer Notes: Bringing a Heal Blocking champion will be essential when fighting Mister Sinister when placed on complimentary AW Nodes. Another important note is that Damaging Debuffs will not trigger Sinister’s Regeneration, but run the risk of being Transferred to you as a result of his first Special Attack.

While Heavy Attack Charging
Developer Notes: Utilizing Sinister’s Ability to Pause the Debuffs he inflicts or Transfers will allow you to get the most from their potent effects. When paired with a Stun, it’s possible to easily gain added Critical Rating and Damage by fully charging the Heavy Attack.

Special 2 - Genetic Negation
Disabling several important genes can render the opponent powerless, in this case, it also leaves the opponent in a catatonic state.
Developer Notes: Facing off against a prolific Evader? How about an enemy who likes to trigger a defensive ability when struck? Worry not, Sinister’s Special Attack will ensure those abilities don’t get in the way of this Special Attack.

Special 3 - Genetic Extraction
Once an exciting genetic structure is discovered, Mister Sinister takes great pleasure negating its beneficial effects and extracting its essence for himself.
Developer Notes: The culmination of Sinister’s work, make sure to Pause the Power Leech to maximize the Power he is able to steal once the attack ends.

Signature Ability - Engineered Perfection
Mister Sinister is able to improve himself with the genes of defeated opponents.
Developer Notes: Sinister is always in pursuit of perfection, be sure to use him often to build his strength over the course of a quest. Inversely, for those fighting him, it’s also important to note that losing a Tech champion to Sinister will not grant him any Passive effects.
Post edited by Kabam Miike on September 2019
5
«123456»