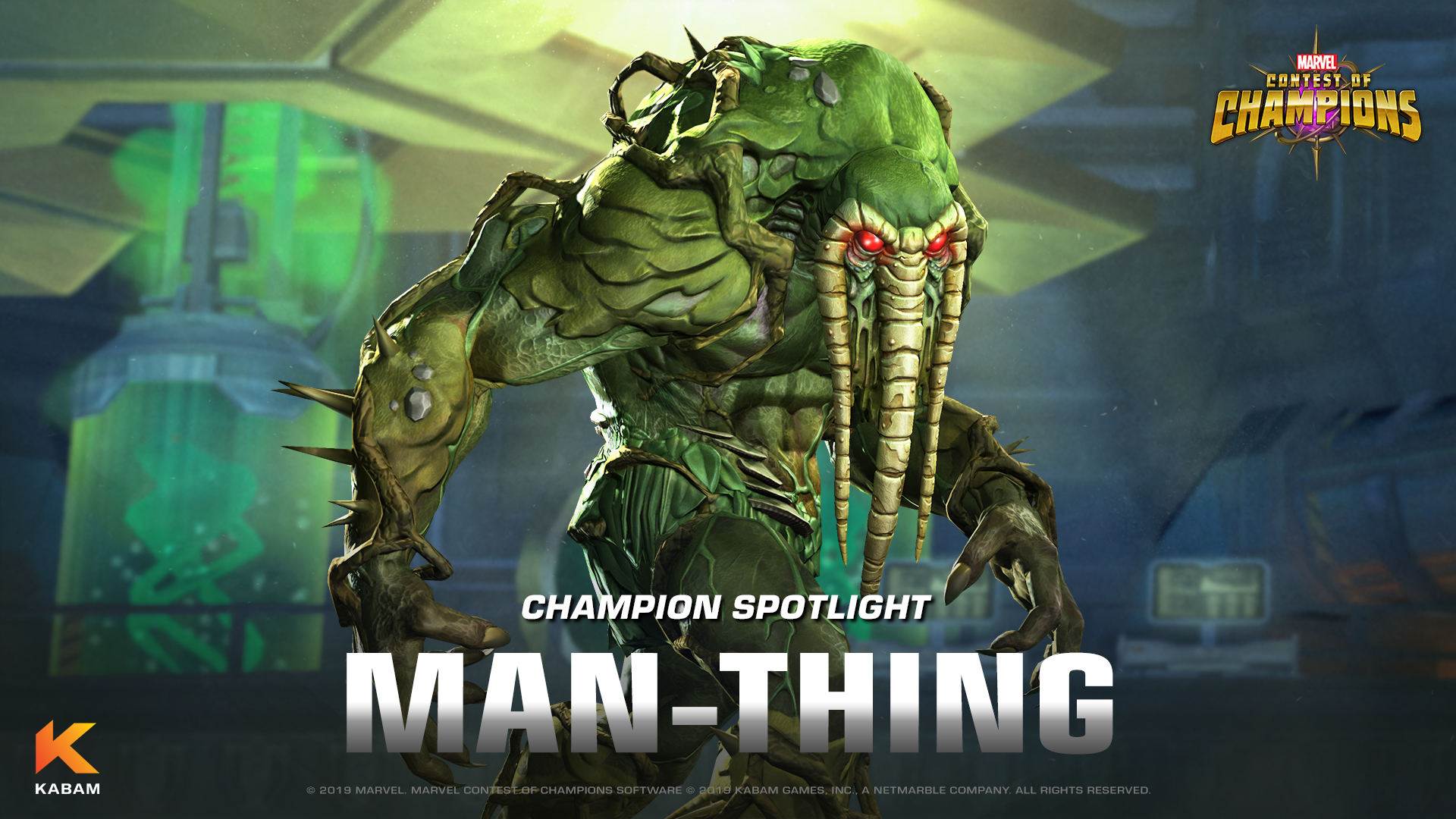 About MAN-THING:
The Man-Thing was once the brilliant biochemist Dr. Ted Sallis. While working for S.H.I.E.L.D. to replicate the Super Soldier Serum, Dr. Sallis was forced to flee due to an A.I.M. plot to steal his work. Injecting himself with the only remaining sample of his serum before crashing his car into the swamp while on the run. Rather than dying from that crash, he was reformed into a creature made of the swamp itself, The Man-Thing!

Man-Thing is all about punishing Buffs, whether they came from its opponent’s kit, or whether it placed them on the opponent itself. This is done by Nullifying Buffs, which converts them into Toxic Pustule Buffs, which can subsequently be Nullified into both Poison and Armor Break, ideally with Man-Thing’s Heavy Attack for bonus potency. When attacking in to Man-Thing the loop is very similar, but the Nullify is more likely to come from Man-Thing’s on Contact chance to Nullify, which scales off his Agitation. The last thing to consider are Man-Thing’s immunities, allowing it to ignore Armor Break and Shattered, as well as Bleed, and take vastly reduced damage from Critical Hits. Make sure to bring someone who can raise their Attack nice and high, ideally without Buffs, and don’t expect to be able to crit your way through the Man-Thing!

STRENGTHS WEAKNESSES
Abilities:
Made of Mush - Passive: Developer notes: The Armor Break, Armor Shatter, and Bleed immunities are pretty standard, but the Critical Hit interaction is more unique. Basically Man-Thing ignores the Critical Damage multiplier, so in a vanilla fight you won’t see any difference between your White (non-crit) and Yellow (crit) damage numbers. However this will change slightly if Man-Thing gains any Armor or Resistances from an outside source (like a Quest Buff, or Synergy), as Critical Hits against Man-Thing do retain their ability to penetrate a portion of any Armor/Resistances it has.

Empathic Agitation - Passive: Developer’s Note:This Agitation based Fury effect is pretty important to Man-Thing’s Damage output, so there’s a bit of a tightrope to walk here to build Agitation while still popping Pustules before they expire. Unless of course your Opponent brought lots of Buffs of their own.

Acidic Secretions - Passive: Developer’s Note:This has a base chance of 7.5% at 0 Agitation, and scales up to 15% at 100 Agitation.

Toxic Pustules - Buff: Developer’s Note:This triggers on any Nullify effect, so that means things like, Man-Thing’s Armor Breaks Nullifying Armor Up Buffs, or that it can be combined with things like Buffet in Alliance War. It also makes Man-Thing a beast with Mystic Dispersion, as it can be triggered twice per Buff, once when the initial Buff is Nullified, and again when the Toxic Pustule is Nullified or Expires.

While Heavy Attack Charging - Buff: Developer’s Note:This makes it a little safer to try and pop those Pustules with a Heavy attack, and makes Stun Immune not a total deal breaker, especially as Man-Thing’s Heavy Attack is a single hit and doesn’t have a ton of reach.

Heavy Attacks - Passive: Developer’s Note:Popping Pustules (I’m getting way too much satisfaction out of getting to write that repeatedly!) with its Heavy Attack, for the Bonus Damage, is Man-Thing’s bread and butter.

SPECIAL ATTACKS Developer’s Note:This ability keeps Man-Thing viable in fights where the Opponent doesn’t bring a ton of Buffs to the table, it’s also one of the things to watch out for when attacking into Man-Thing.
SYNERGY BONUSES
FEARSOME FOUR - Unique - with Howard the Duck, She-Hulk
BANE OF EVIL - Unique - With Ghost Rider
THINGS - Unique - With Thing
MISUNDERSTOOD MONSTERS - Unique - With King Groot