Woozie Posts: 477 ★★
February 2020 edited February 2020 in General Discussion
After all these streams coming out for the Abyss I realised I still haven't touched LOL, so I thought I'd finally rip the band-aid off and give it a go.

The purpose of this post is to hopefully encourage those who haven't 100% LOL and what they can expect to spend/do if they try.

Here are all my tips and data using a 5/65 Sig 183 Aegon for every fight I encountered:

My main tactic was to take it nice and slow in the sense where I didn't have to complete fights consecutively, I watched Seatin and Lagacy's Abyss livestreams and I saw most of their mistakes were from fatigue and not taking quick breaks so I tried not to boost as much as I could - allowing me to take breaks in between fights. I think this worked out well in the end although stupid mistakes are inevitable, see below:

Here I tried timing each fight, hit counts and obviously revives used to strategize resource allocation for future runs and what to expect. As it was my first path I was sloppy and made many mistakes hence all the boosts and items used.

I messed up bad on this path and went the wrong route, which was by far my most expensive path as a result and I freaked out and didn't record data for this path.

Getting a lot better at tackling LOL and got into a really good rhythm fighting Maestro. 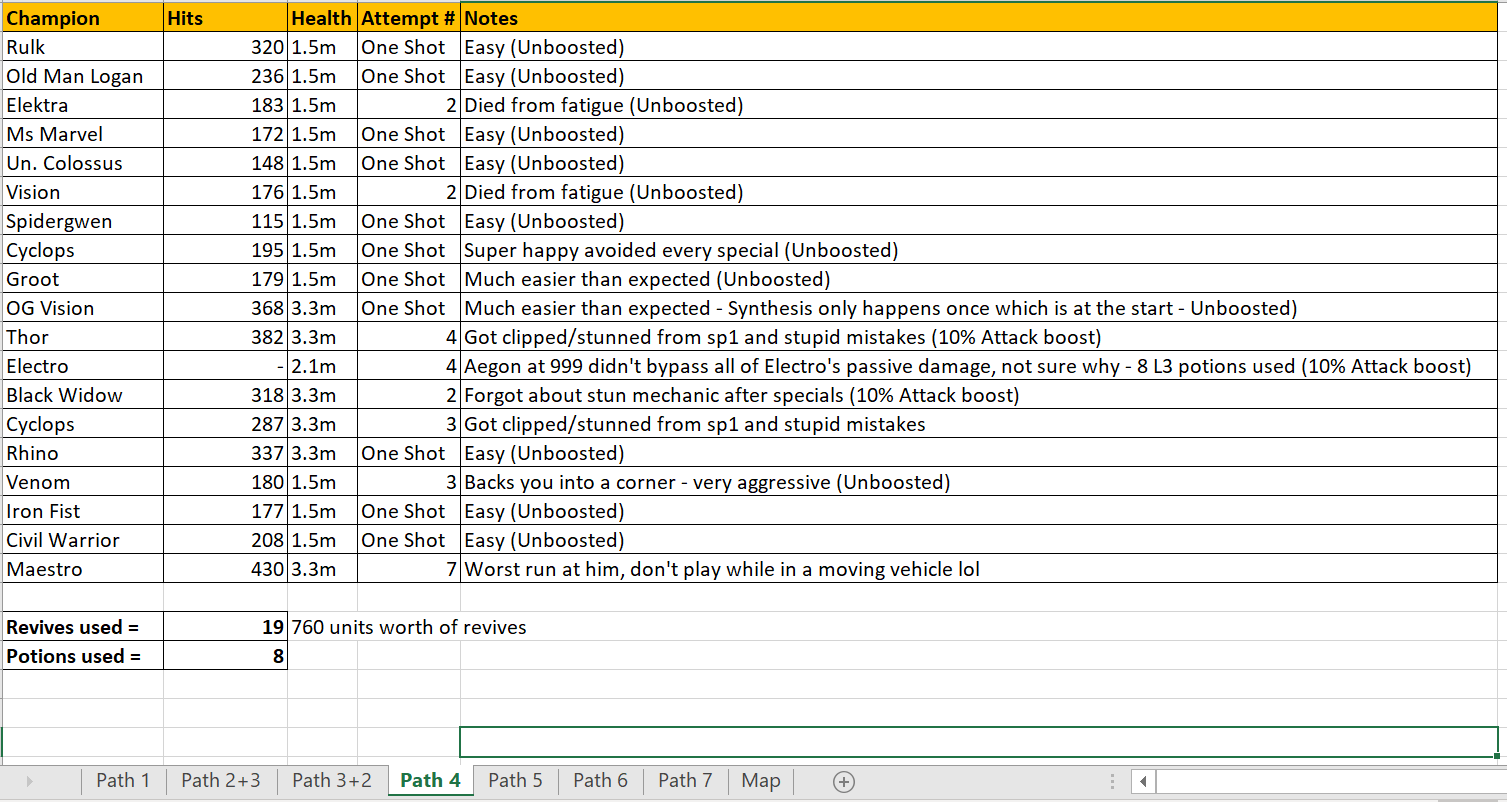 Electro you need to heal up for, still took damage sometimes - not sure entirely how this interaction works. 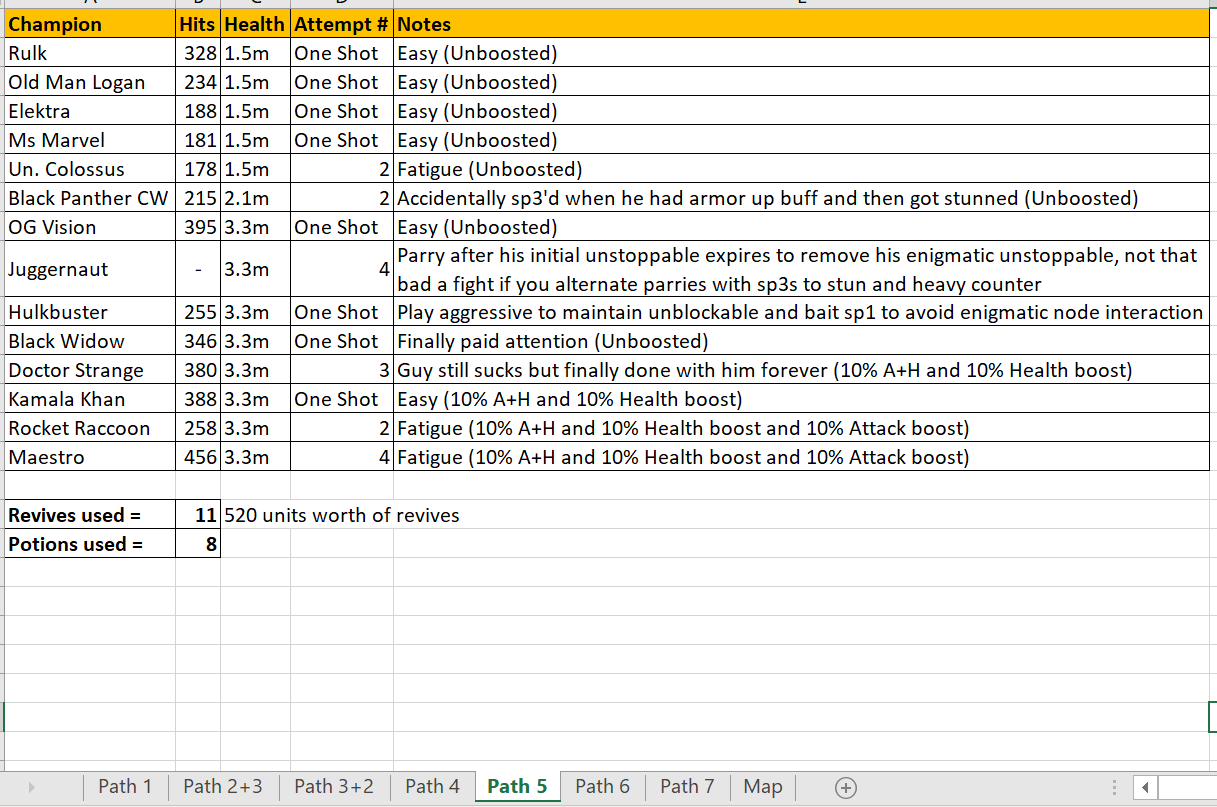 Juggernaut sucked, but it's not too bad of a fight with parry/sp3 & heavy to rid of his unstoppable, just be patient and wait for his buff unstoppable to expire first before parry/sp3. 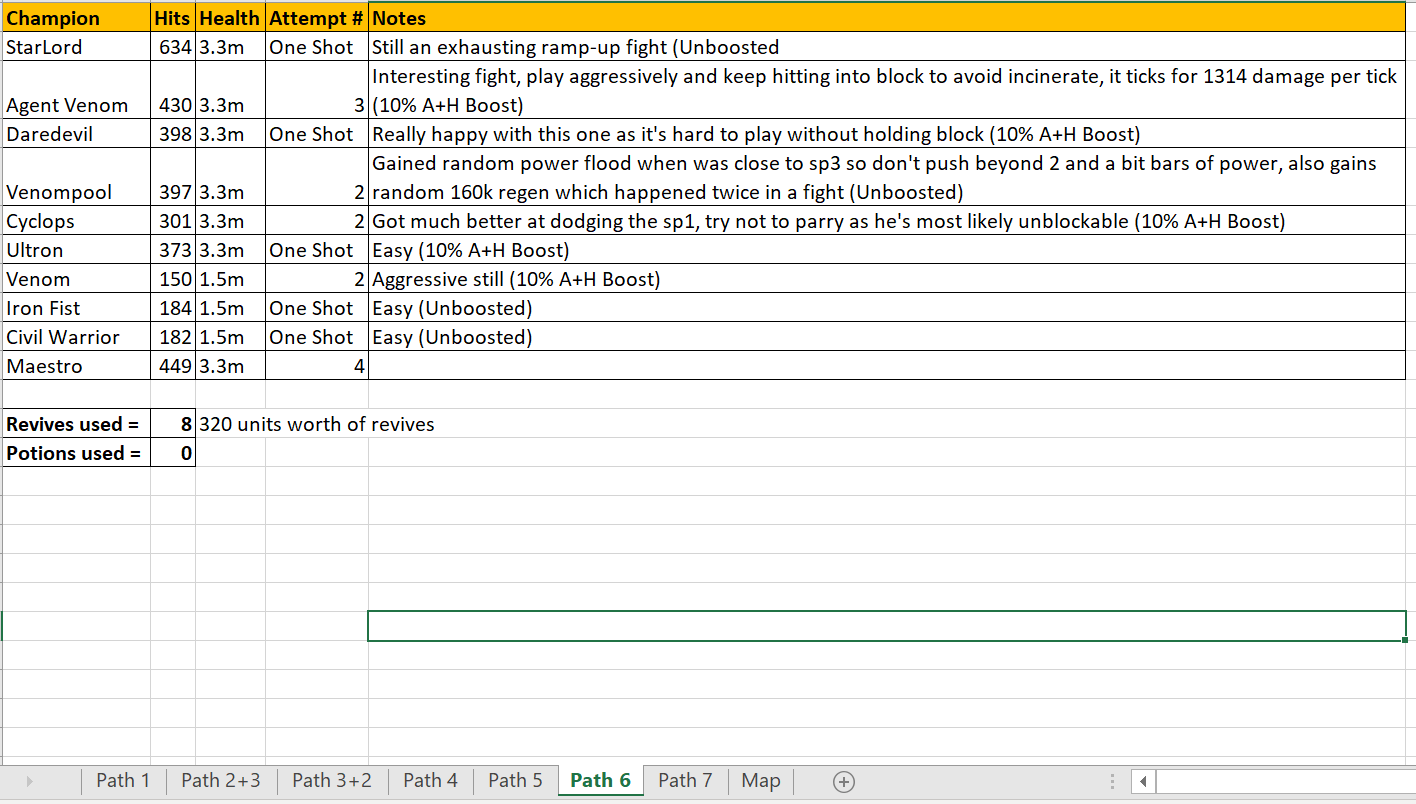 Read up Reddit and forum posts for the Agent Venom and people said it was bugged or whatever, not sure if he still is but just keep hitting into his block if you can't land a hit and ensure you don't get incinerated at 1314 per tick - kinda like a really quick Bane node is how I'd treat it. 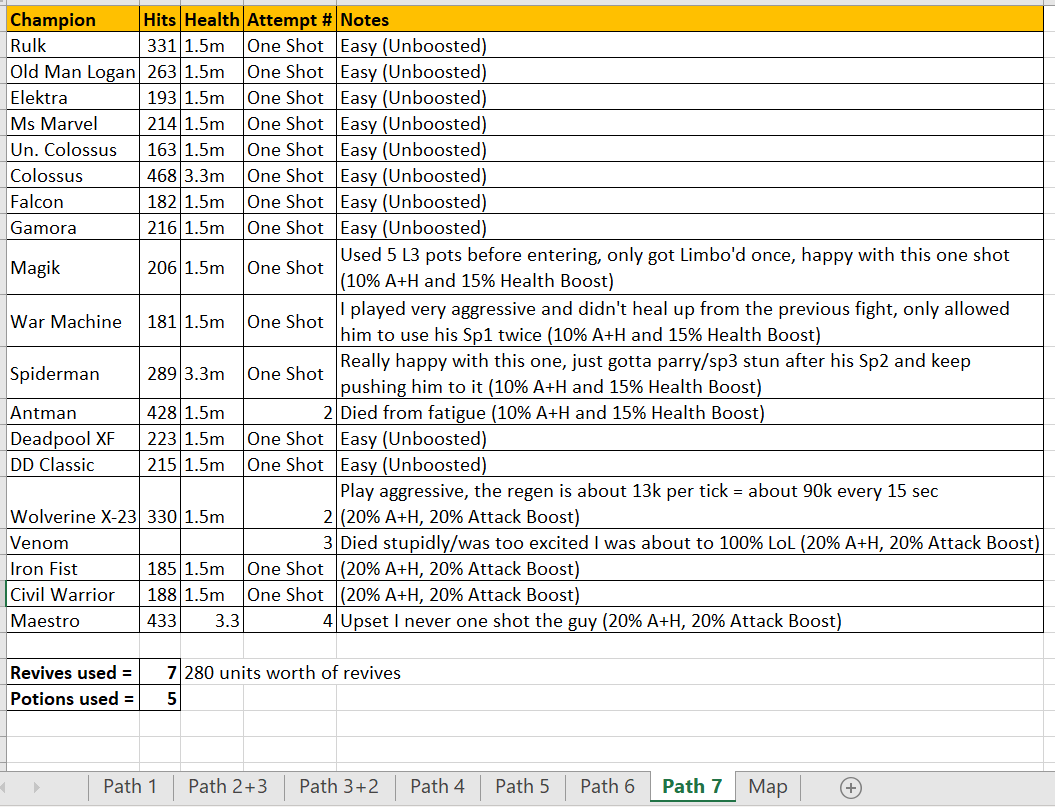 After 4 days I did it and I'm super happy with it. It was about 3.4k units total, which is much higher than it should've been since I had no stashed revives as I'm trying to 100% Act 6.3 (hence the stinginess on boosts etc.)

Star Lord - Combo Shield
Angela - +25% Fury Potency
Heimdall - Saves your life, also gives you a fury every fight by dashing back and holding for 1.5 seconds (best done when you have time during the sp3 stun)
Hela - Champions have a 100% chance to instantly regain 20% of their HP just before they're knocked out. Each living teammate reduces this chance by 20% - Hence you MUST KO all your other champs before entering fights.

I truly think this is the best synergy for LOL specifically as you revive 20% instead of dying, the Nick Fury/Quake evade synergy I think is better for the Abyss where you need more roster space for other champs.

I initially did Path 1 & 2 with my normal suicide setup:
3/3 Liquid Courage & Double Edge
3/3 Willpower and 2/3 Coagulate

However, after realising I could go for 100% I reset masteries and turned off Willpower and Coagulate, as Aegon shrugs of suicide Debuffs after a hit anyway (the first fight you'll lose about 20-30% against Rulk/SL before you shrug it off). I reinvested them into:
3/3 Courage (Plus 20% attack when under 50% health which is why I never healed up and used 40% revives)
4/4 Fury Potency & Extended Fury

The difference between these two mastery setups was substantial, as I had to reset my mastery setup for AW the next day back to my original one, for my initial set up a 6 combo at 999 with the furies you gain when playing aggressively was:

After resetting to max Courage and Fury enhancements a combo was:

General Tips:
- Take the first fight unboosted and keep quitting until you one shot, I honestly find these amongst the hardest fights in LoL because ramping up with no abilities sucks
- If you are using this synergy with Aegon there is no need to heal up (aside from Magik and Electro fights) as you gain 20% per death anyway, I did almost every fight on 20% or below
- If you are about to finish a fight with 10% or less and you know you are about to win, take some block damage so you can get the Hela/Heimdall synergy +20% health and save yourself revives.
- Hitting into the block (before 999 combo) and Sp3's for back are your best friends for power control. If an opponent has a tough Sp1 but an easy Sp2 (Elektra, Spidergwen, Falcon, War Machine) keep hitting into the block right before their Sp1 and then you can intercept/Sp3 to push them to their easy Sp2.
- Certain champs have very quick Sp1s, in the sense that when you 6 combo and try dash back right after you can get clipped very easily, these champions include - Vision (both), Cyclops (both), Spidergwen etc. It is recommended that when they've got a bar of power to play patiently and only 4 combo MLLL and then dash back and bait, I got clipped a lot trying to dash back after a 6 combo and they fire this off very quickly.
- Take breaks! This content is long, refocus your eyes and stretch your thumb when you're doing your Sp3.
- Have a map in front of you to ensure you don't take a wrong path as it is easy to lose track.


Tough Fights/Ones you have to pay extra attention to:
- Agent Venom - Play aggressively and keep hitting into block to avoid incinerate, it ticks for 1314 damage per tick

- Juggernaut - Parry after his initial unstoppable expires to remove his enigmatic unstoppable, not that bad a fight if you alternate parries with sp3s to stun and heavy counter

- Wolverine X23 - If you're going to use boosts this is the fight, her regen is 13k per tick = about 90k every 15 sec in addition to her own champion regen which is about 5k per tick, I did this without Sp2 bleeds as I ran suicides which I think would definitely help, but otherwise 3/3 Petrify goes a long way if you time your Sp3 right before she's about to regen so it only becomes 8k per tick.

- Maestro - If you're running suicides you have to hit into his block to shrug off your debuffs, he also does not take sp2 bleed so only use it to push him to his Sp2. Push him to his Sp2 as it's very easy to evade, his Sp1 is simple to dodge, but only swipe once per beam and don't double dash as you'll get clipped.

Well, if you've made this far thank you so much for reading! I hope you got something out of it, whether it's encouragement to give it a go, or if you did this ages ago and wanted to see how the times have changed. To the people who did this years ago with 4 stars or a 4/55 StarLord you people are amazing and I truly do not understand how people 100% LOL back then without Odin after Odin. Probably smashing the Abyss now lol.