My F2P Story, Progress and my thoughts on Act 6.4 Rewards 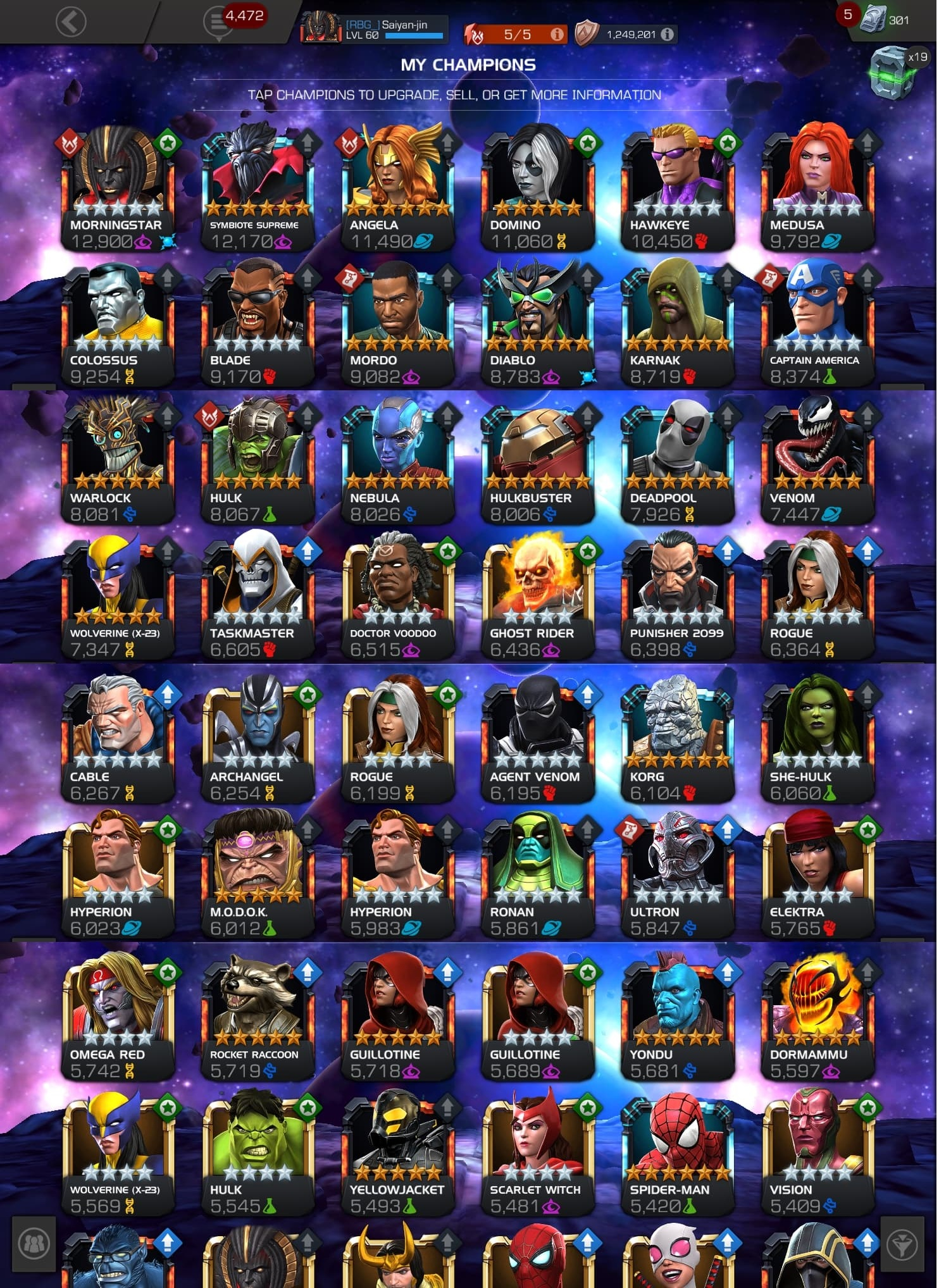 I just saw Brian Grants F2P video on the act 6 rewards and it made me think "I'm in the same category as him but much less advanced as he is so why not get some opinions". I do think the rewards suck for 100% of act 6 and even completion just as most players but even so just completion alone will give me a big boost as it'll allow me to R2 2 6 stars (assuming I get 2 more good ones) or R5 3 5 stars. They really should have added more tho. Even tho the rewards for my game is gonna make a big difference I get that other end game players and spenders feel slighted and so I do I actually as the effort needed to 100% act 6 isn't worth the rewards honestly and it makes me not wanna 100% till maybe 2021 or later.

When you look at the pic above on my top champs what do you think? Where in the game do you think I've reached being F2P? (I've spent .99 cents in MCOC but that was back in November of 2016 by accident which was just before 12.0 which made me never want to spend again).

My roster is indeed very limited as you can see and I actually stopped playing for a full year mid 2018 and came back mid 2019. When I left, Variant wasn't a think and when I came back up to V3 and Act 6.2 was already out so I had stuff to do The reason you may be wondering why I have 2 R2 6 stars and not focusing on 5 Stars first is because since I took a full year off I wanna play catch up so I decided to focus on the future of the game. Yeah I can't awaken them as I don't buy any offers or get the good deals but so far it's been working for me.

You also may be wondering why I have some champs ranked him like OG Cap for example who btw is sig 140 and I ranked him before any variant came out meaning full resources. I enjoy playing him, he's fun and no one really gives credit to taking 0 damage on blocks and with a synergy or two he can block forever and just "keep it up all day" no problems. Yeah the fight WILL take all day but he does it still. Also he's good vs 6.2's Champion. How? Well if he takes 0 damage on block then the last 10% is a joke as you can just stay in the corner, block everything and evade specials at your leisure plus the extra long parry stun duration also gives you more than enough time to breath and take the fight at your pace. He works all over act 6 also. Maybe you're wondering about Hawkeye also. When I beat 6.3 I had finally awakened him after him being my very first R4 champ way back in 2017 so I figure why not. I use him all the time, he's VERY valuable to my team and now he's awakened. Also I'll be even more odd and say in the Avengers movie Hawkeye is my favorite character of all of them followed my Cap and I've enjoyed both in the Cartoons, Movies, Comics, etc so more reason to rank the champs I find FUN and I enjoy (we forget that it's a game to escape life and have fun so often).

Plus I could care less about prestige as I don't even do AW anymore and even if I do with my alliance it's at a much lower rank so it's no hassle because I've done high ranked AW and that grind isn't for me anymore. Same with having to rank champs you don't even like just to add up some numbers overall. I don't even grind arena which I assume many would think. When I stopped in that year of playing I got married so the time is much less and arena isn't something I can do. The last time I really grinded was for the love juice arena and got to 1.5m last week for the first time in years in the 4 star basic just for fun to see how it was and it was ok but that time I don't have anymore.

You don't NEED to spend to be an end game player or have this game as your job or even grind arena either but all those do make a huge difference and I thank the people that do spend or this game wouldn't be here. You don't even need the "best champs in game" to beat things also (they help way more tho) as you can see from my roster) so don't get to dishearten by the game. Remember to play for FUN and not to have the best "insert number or level here" or else you won't have fun, get burnt out and just resent the game also.