Clatonius Posts: 206 ★★
May 22 in General Discussion
Hey.I would like to share with you my thoughts on act 6 and my achievements.So just today,I completed Act 6 and I think that Grandmaster fight was really fun but a bit difficult.I had to use 5 to 7 revives for that chapter.The thing that kept messing me up was his ability to remove my token of competence when he hit me with his heavy.The team I brought was Domino, Masacre, Red Hulk (Flaming Trinity),CapIW and Heimdall. 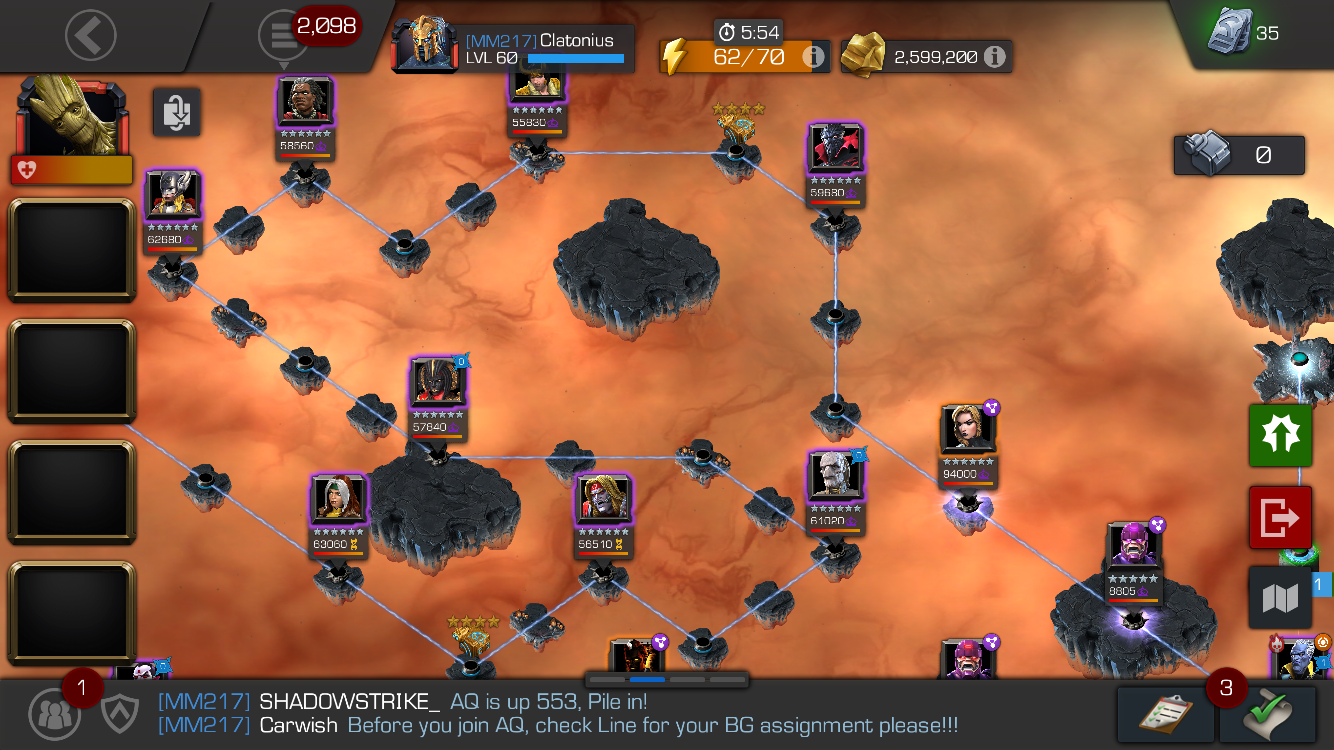 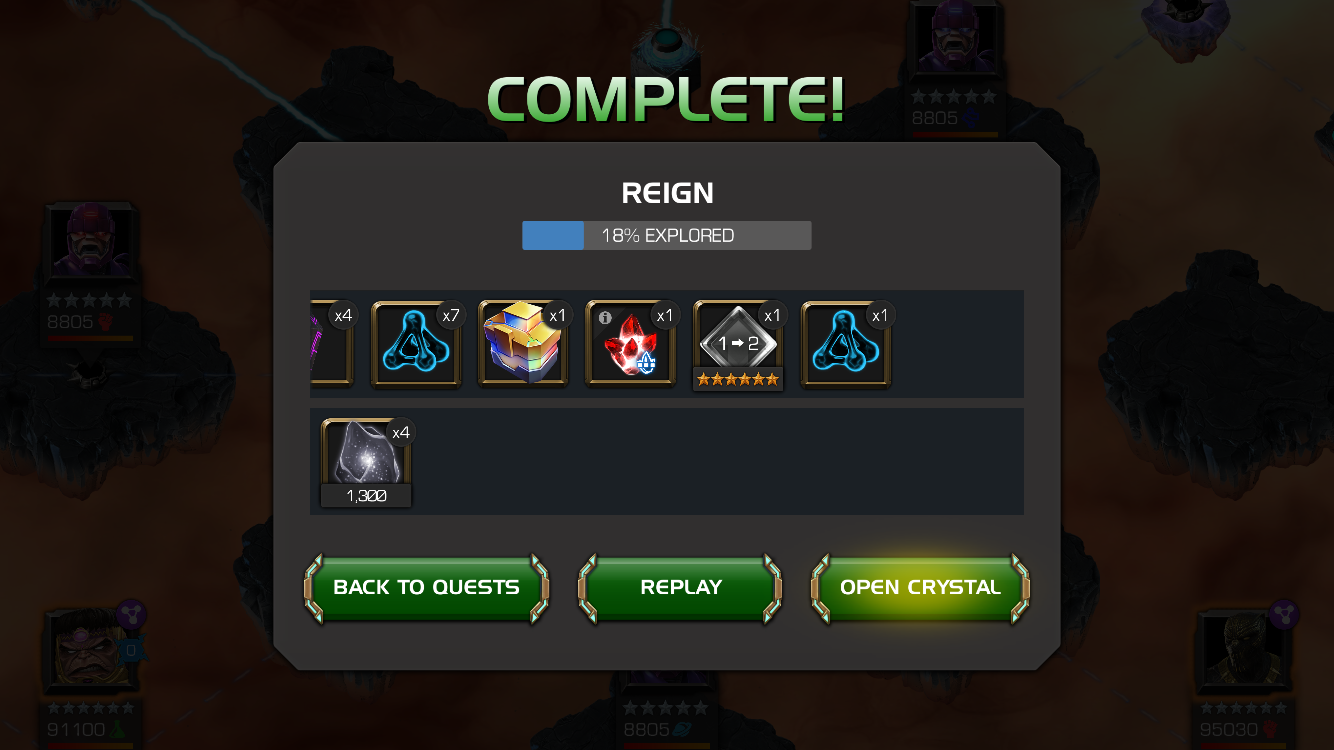 I took the mesmerise path and personally it was really easy I only used 2 revives in total for it.One was for Black Widow and the other for Jane Foster.The way I bypassed Morningstar's bleed mechanic is by using Domino and by parrying and then I dash back and whiff an attack to get myself a bit closer to the opponent and then throw of a heavy attack.So basically the first hit wouldn't hit but the second one will and the last hit doesn't make contact I would not have to deal with being bled and the incinerate damage is just too good.I would say this strategy is really good and it can also counter Electro's damage back mechanic but you might not need to whiff an attack before throwing you heavy as your final heavy will land anyways.I would say Ebony Maw on that path was relatively annoying because I was occasionally unable to parry stun him as both his medium attacks do not make contact.I relied on the re- parry method but sometimes he just throw his heavy.He also managed to degenerate me with his ability and it was like 700 per tick, pretty scary.Plus each time I parry it was like 400 damage.MVP:Domino
And for the act 6.5.4, Dr Voodoo was my boss killer and Domino got me through the Energy Adoption Path. 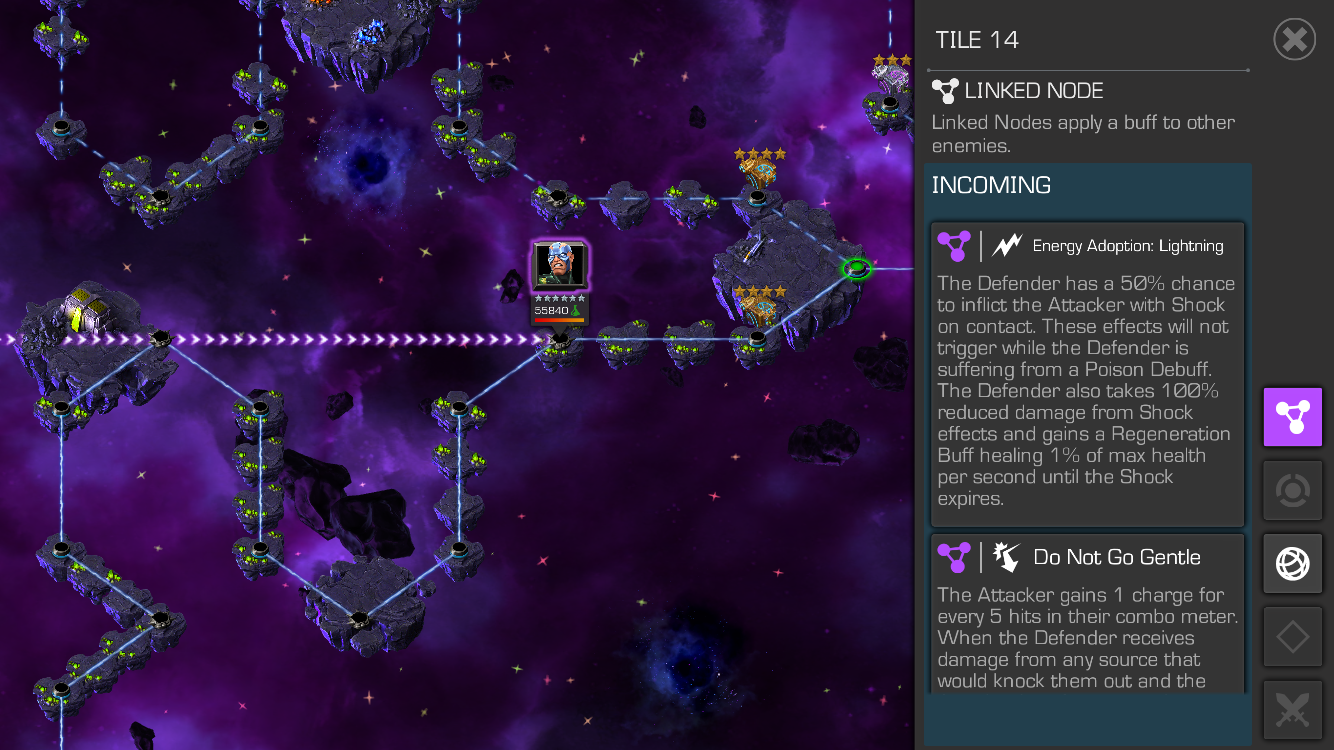 Dr Voodoo also got me through the Vision Aarkus mini boss.And for the Cap Marvel boss, he was my only option as I don't have a lot of good mystic champs but when I tested out a hypothesis, I discovered that with his power burn buff, I was able to deal a ton of extra damage on Cap Marvel as whenever he burns power he will deal extra energy damage. And the reason why the Energy Adoption Path for me was so easy was before the Do Not Go Gentle Node didn't really affect Domino's playstyle too much with Flaming Trinity.And the Energy Adoption node, it wasn't that hard and I actually took advantage of it as I was regenerating from willpower and each shock only dealt about 30 per tick.
And for Act 6.3.1.I went for the easiest path and at first I thought Aegon or Domino could defeat the boss easily but I was proven wrong but then I discovered that Archangel was a solid option and I took him to rank 3 but wasn't at max level yet and it still worked. I remember it only taking me 2 revives for Medusa.MVP:Archangel
Act 6.3.6 was not that hard for me as I cheesed CapIW with a R3 Ronan who wasn't fully maxed.I would say Ronan has a really essential ability when awakened and that also got me through Act.6.4.5 Colossus Vivified node and after which I took the Evade path with Flaming Trinity.
For Act 6.2.2, I was stuck on that quest for some time as I thought my Cap Marvel wouldn't work well as at that time she wasn't awakened and I still didn't have Nick Fury but eventually I was able to take down Mr Sinister dealing about 20% of his health each revive.
For Act 6.2.4 I originally used my Dr Voodoo at R3 but it didn't work as he didn't have a way to instant nullify The Champion's regen buff and The Champion was not going below 35% and I wasted 500 units to no avail.But after a while,I discovered that The Hood was pretty good for this so I took him to R3 but wasn't maxed out and he was able to take down The Champion with a few revives.I personally liked The Champion fight as I was happy Hood was able to take him down.But I am sure it would be a lot more annoying if he had nodes.
Now for LOL,I was able to do my first run with a R4 Aegon and afterwards I 100% it with a R5 and personally Maestro wasn't that hard but for some paths there were tricky opponents like X-23 as I didn't bring my Void to counter her and it me a few revives to get Aegon to outdamage her regen and defeat her. 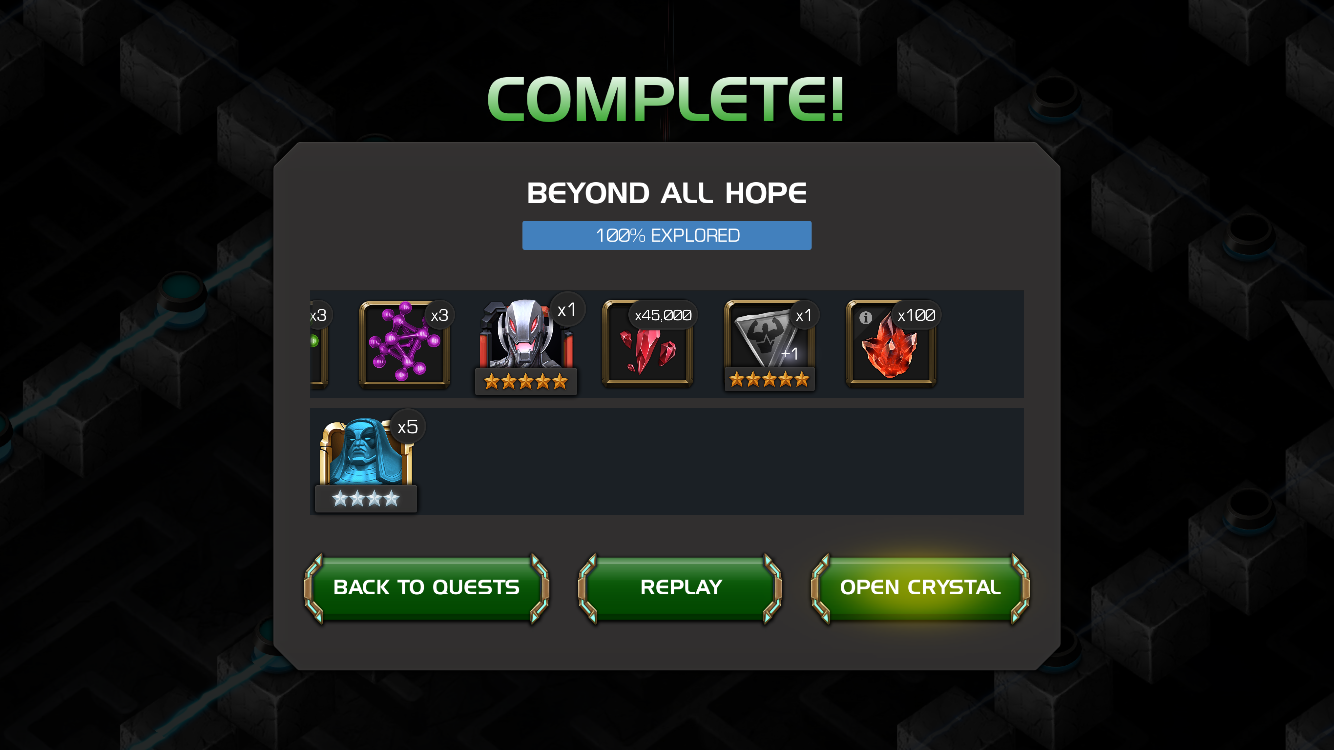 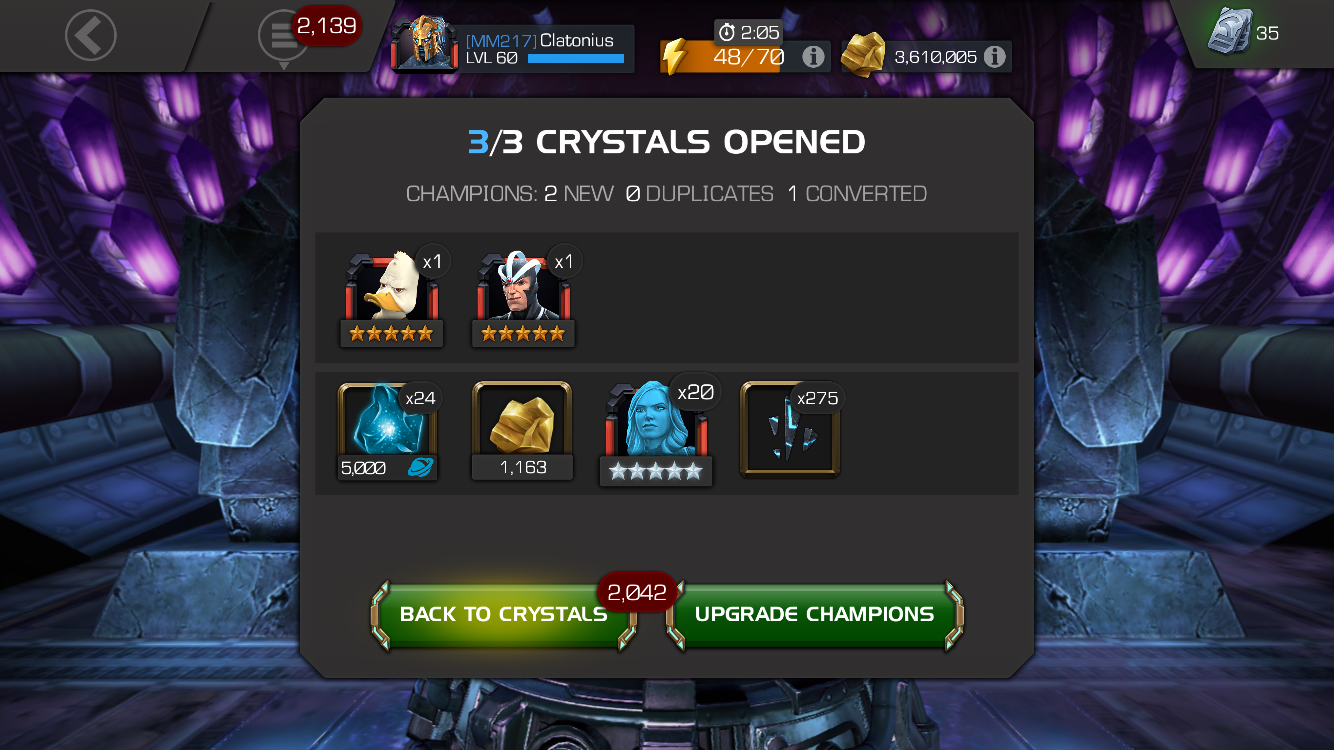 I also got a 6* Vision Aarkus and a 6* Spider Gwen but forgotten to take a screenshot of it. 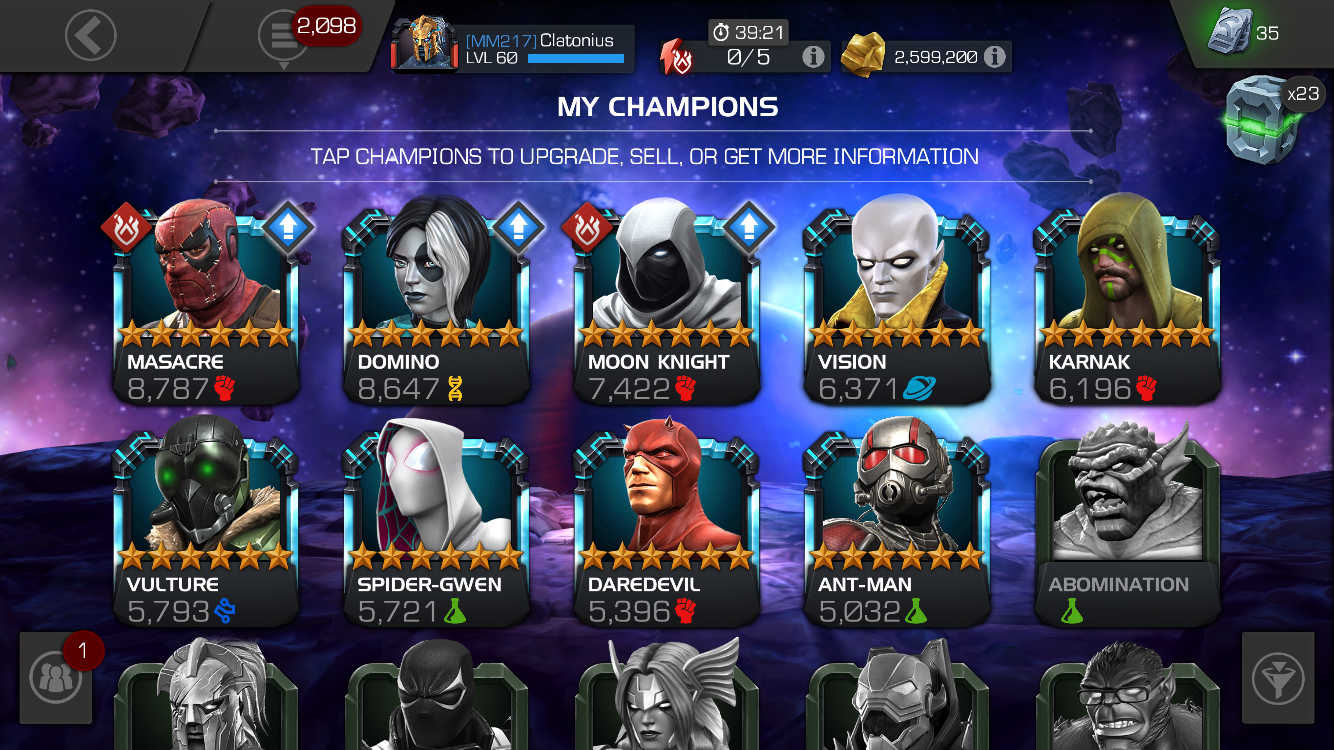 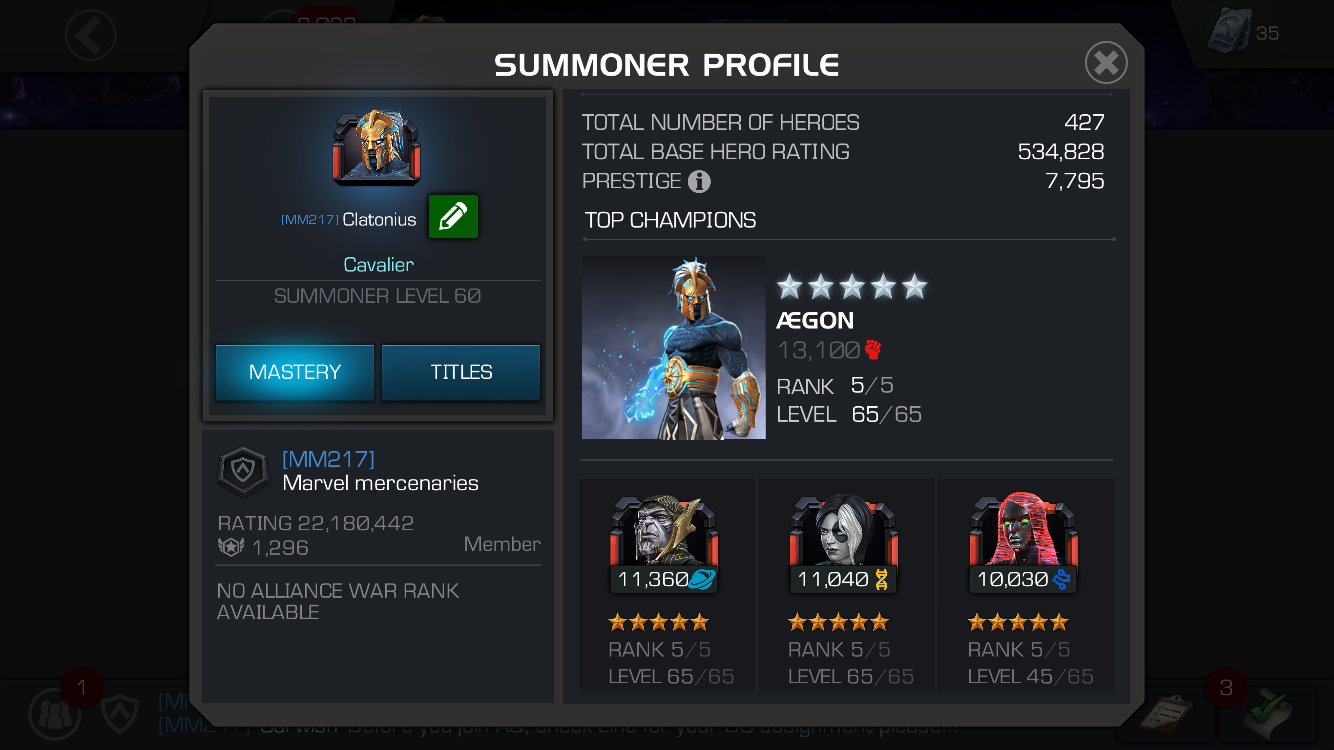 This is my 5* rooster 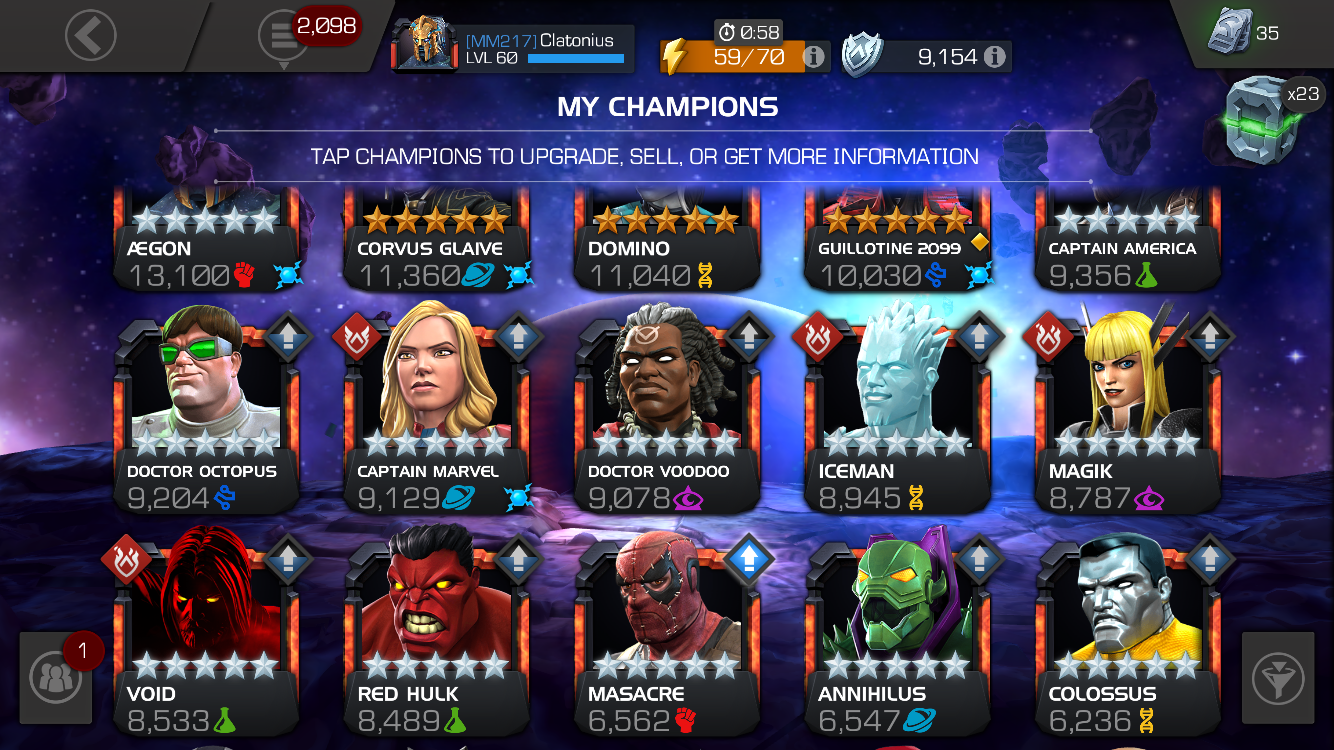 This is the only Anniversary title I got. 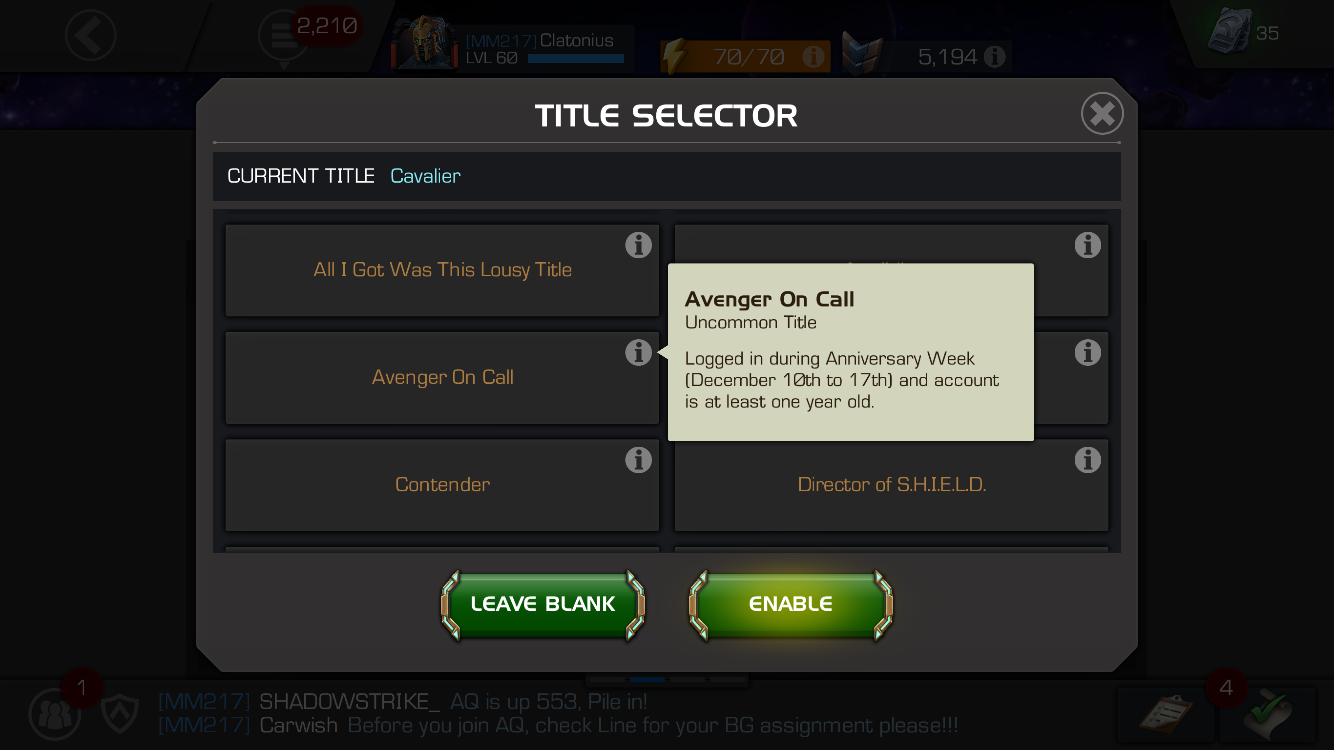