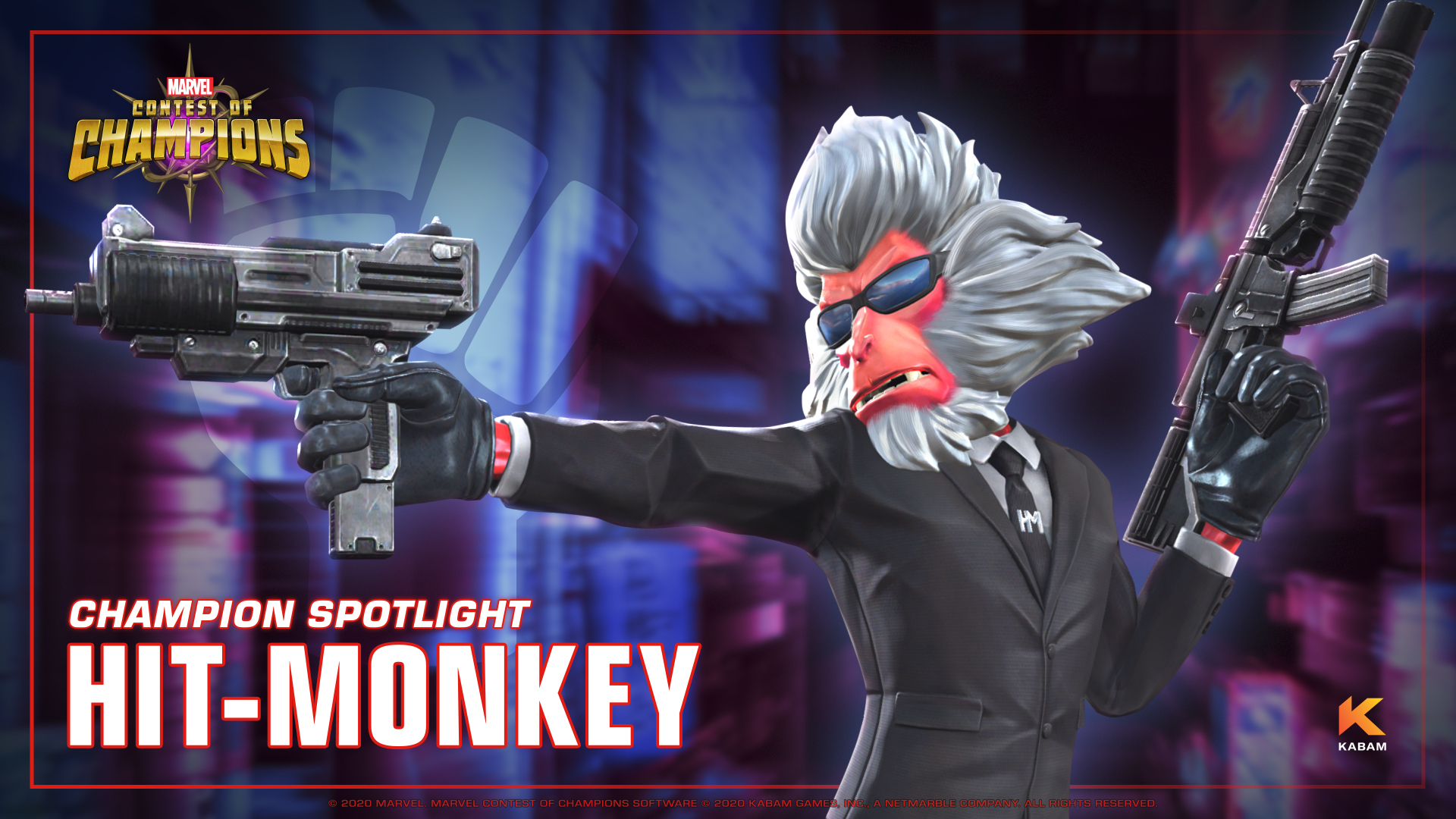 Gwenpool here! It's a good thing I speak Macaque! This dapper little guy was just an ordinary monkey, until his tribe gave sanctuary to an on-the-run assassin. Mercenaries came and killed both the assassin, and the rest of Hit-Monkey's tribe! So Hit-Monkey took up the fallen assassin's weapons and swore vengeance against both those responsible, and all others who call themselves mercenaries.

Hit-Monkey is a versatile assassin who can quickly eliminate his targets while bypassing their defenses. The nunchaku he uses for his basic attacks are guaranteed to be Critical Hits, and landing three Critical Hits in a row enables him to switch into one of two combat modes. The first, Assassin’s Cunning, lets him strike evasive Opponents and improves his Bleed damage. The second, Primal Rage, lets him ignore enemy Armor and Resistance, and lets him inflict Distorient. Choose the right mode for the right enemy, and show them who the real superior simian is!


Nunchaku: Developer’s Note: A good strategy when playing Hit-Monkey is to use Medium-Light-Medium combos, rather than the regular 5-hit combo, as all three hits in the shorter combo are Guaranteed Critical Hits, meaning you’ll trigger a Bleed Debuff every combo.

Monkey Scheme, Monkey Do: Developer’s Note: Monkey Schemes are Hit-Monkey’s main mechanic. After landing 3 Crits in a row, you have the choice between his two different combat modes, Assassin’s Cunning and Primal Rage. The two modes are useful in different ways, so choose wisely.
While Hit-Monkey excels at 3-hit combos, it’s also entirely possible to trigger a Monkey Scheme using 5-hit combos, since the last hit of the combo will be Critical, and the next two hits of your next combo will trigger a Scheme.

To give you a sense of what this looks like, here’s Hit-Monkey’s starting state:

After landing a Critical Hit, he tracks the hit on the HUD:

Landing 3 Critical Hits will grant you a Monkey Scheme, and Bleed the Opponent:

When Knocked Down: Developer’s Note: This is Hit-Monkey’s main threat when he’s defending. Knocking him down forces you to content with both his combat modes at once.

On Opponent Evade: Developer’s Note: Handy for hitting those sneaky, Evasive Opponents like Spider-Man and Quake.

Assassin’s Cunning - Passive: Developer’s Note: In Assassin’s Cunning, you really, really want to be doing 3-hit combos. Each combo you do will Bleed the Opponent, and also increases the chance of triggering Critical Bleeds instead of your regular Bleeds. And if the Opponent would get a hit in, Hit-Monkey has a very good chance to Evade it.

Here’s what Assassin’s Cunning looks like on the HUD:

Primal Rage - Passive: Developer’s Note: In Primal Rage, you want to change up your combo style. This mode benefits from landing as many Light Hits as possible, so you ideally want to start your combos with a Medium Attack, followed by 4 Light attacks. You won’t trigger Bleeds as often, but all your hits will ignore the Opponent’s Armor and Resistances, and you’ll easily be able to Distorient them with just your basic attacks.

Here’s what Primal Rage looks like on the HUD: