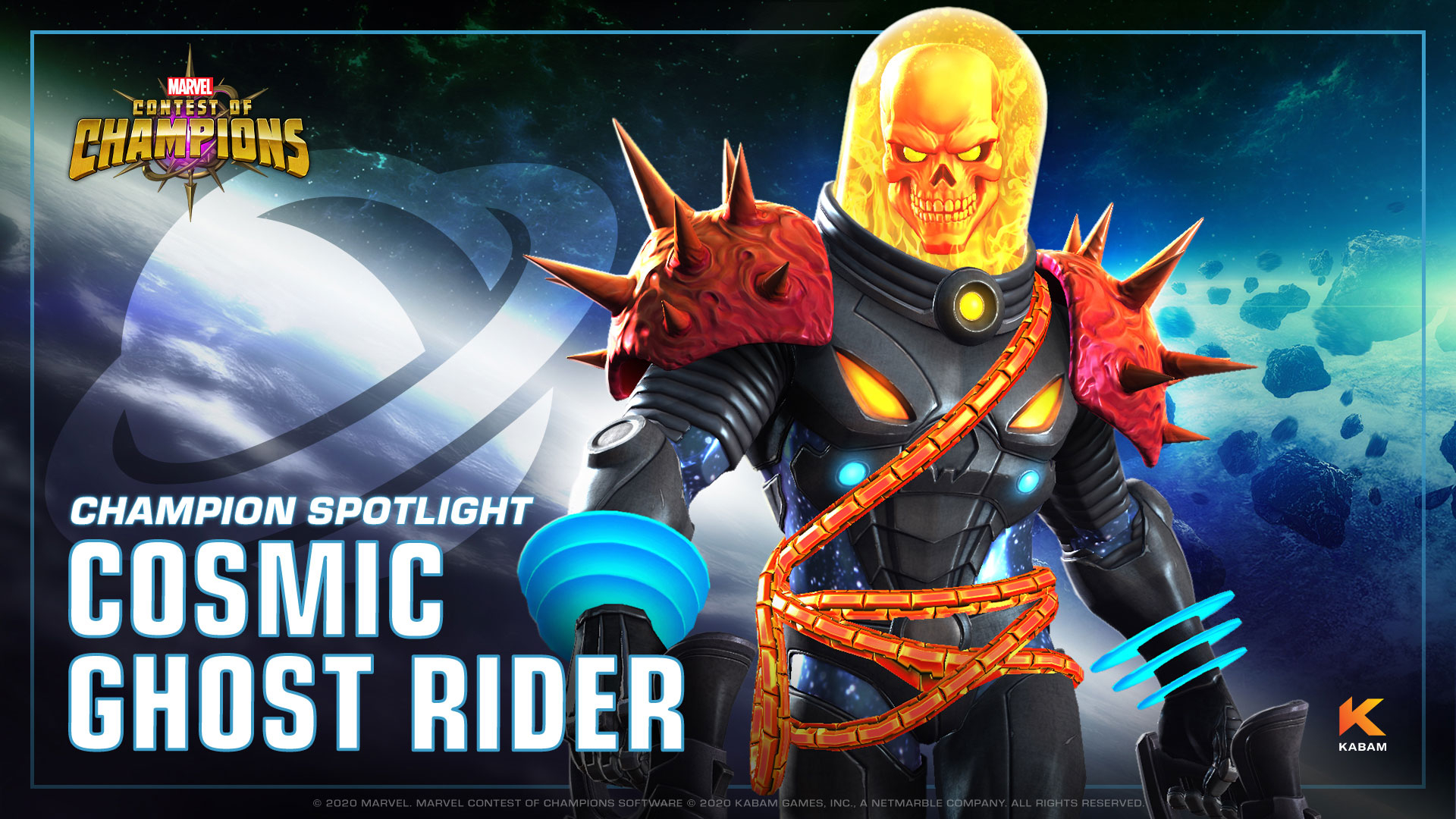 About Cosmic Ghost Rider
During Earth’s last stand against Thanos the Punisher, Frank Castle, was struck and killed. A lifetime of killing saw his soul sent to Hell, and a deal struck with Mephisto saw him to become the latest Ghost Rider. But by the time he returned to Earth, everything was dead, and Thanos was gone. After endless years alone, Ghost Rider was found by Galactus, who agreed to make him his Herald in exchange for being allowed to devour Earth. And so he became the Cosmic Ghost Rider, and a Herald of Galactus.

Playing Cosmic Ghost Rider is like a “Choose Your Own Adventure” of Buffs. Different actions trigger different Buffs, and Buffs cause Judgments. Judgments are what Cosmic Ghost Rider is after as they increase the Duration of further Buffs, until he consumes his Judgments and the loop starts over. Controlling the order Cosmic Ghost Rider’s Buffs are triggered in is key to getting maximum value out of the high impact ones, and then combining them with Armor Breaks to reach max potential. When battling against Cosmic Ghost Rider your concern becomes preventing his Buffs, and therefore their associated Judgments. Fate Seal is a useful reset button on his building counter, and the Unblockable Buff on his Special 1 needs to be respected if that Judgement hasn’t triggered yet. Once his Signature Ability unlocks he becomes much more dangerous on Defense, as allowing him to reach his 5th Judgment will then trigger a much more dangerous Damnation Debuff.


Cosmic judgment - Passive Developer’s Note: Ok here’s the meat and potatoes of CGR’s kit. Triggering a Buff triggers the corresponding Judgement (only 1 Judgement per Buff Type), Judgements make your Buffs last longer, at 5 Powerlock your Opponent, then they all covert to Armor Breaks, and you start over. The fun part comes in controlling the order you trigger your Buffs in, can you fit in an Aptitude before triggering the Fury? When do you get maximum value out of the Power Gain? Etc. However Cosmic Ghost Rider will trigger Judgments for any of the listed Buffs when they’re placed on him. This means Quest Buffs, Synergies, etc are all valid places to give Cosmic Ghost Rider some extra Judgments.

When Attacked Developer’s Note: Cosmic Ghost Rider has a lot of Buffs which read pretty much like this one. You can trigger the Buff, but once that Buff places a Judgment, you have to wait until that Judgment clears to place it again. Basically this means you can trigger this Buff once per 5 Judgment rotation.

Finish a 5-Hit Combo with a Medium attack Developer’s Note: Vigilance is either a nice counter to an annoying Miss (G2099 or Darkhawk), or an easy to trigger throw away Judgment.

Finish a 5-Hit Combo with a Light attack Developer’s Note: This is a big one for CGR. It’s a strong short Power Gain Buff, and using it correctly is critical to Cosmic Ghost Rider being able to jump to the Special Attack that corresponds to the next Buff/Judgment he’s looking for.

When Charging a Heavy Attack Developer’s Note: Another important Buff for CGR. Do you trigger it right before the Buff you want to boost, or try to save it until late in his rotation, and try to boost multiple Buffs with it?

When Activating a Special Attack Developer’s Note: The Cruelty is quite nice for damage output, especially if you can combine it with the SP2’s Precision.

Please see above for **updated numbers. Thank you.
Post edited by Kabam Boo on October 2020
10