Return on investment for the Celebration Shard Arenas

DNA3000 Posts: 12,077 Guardian
December 2020 edited December 2020 in General Discussion
With all the ... discussion surrounding the celebration shard arenas, I was prompted to ask the objective question of what the return on time investment actually is, in quantitative terms, and to compare that return to the game in general. In other words, how good or bad are the rewards relative to the time spent, and what are the comparable activities that generate similar rewards.

I've greatly abbreviated the calculations so this doesn't get too long, but I'll summarize what I did. I estimated how many points per round a player could expect to get, assuming they were using maxed out 2* champs and won every fight (no deaths). I included the ramp up for the first five fights at lower multipliers. I looked at all of the battlechip, gold, shard, and unit rewards in all of the milestones for all three arenas (I ignored the collector crystals for this analysis), and factored in the gold and BC you get for just winning the rounds, and came up with this table of your *cumulative* rewards for X rounds of grinding (meaning, that's the total you get for doing that many rounds in that arena, including all milestones and all rewards for individual fights and rounds).

As far as I can tell, you get the same amount of points per round in all three arenas, so we can compare apples to apples when it come to time and effort. If you know how fast you grind 2* champs in an arena (those fights tend to be a bit easier and faster than in other arenas), you can estimate how much rewards you'd get for how much time.

Most players I believe grind somewhere between 20 and 30 rounds per hour. So the 5* arena can be completed in something between two and three hours across seven (now six) days. Half an hour a day twice a day gets you there. The question is, should you do that, or do the 6* arena instead? Well, according to my calculations, the same level of effort gets you to about 1500 6* shards. So it depends on whether you think 10000 5* shards is worth more, or 1500 6* shards is worth more.

Total time to complete the 6* arena is going to be between seven and a half and eleven and a half hours, with the median time of about nine hours. That would take about 1.5 hours per day across six days. If you're not an arena grinder, that's a lot of grinding time. However, if you are an arena grinder, that's a normal amount of time. Should you switch from whatever you're grinding now to the 6* arena?

Probably. You're definitely getting more shards. You might be getting slightly less units, it depends on what you're grinding normally. But I think the difference is small enough that the shards more than make up for it. Here's a table that shows the approximate rewards per hour for the 6* arena, depending on how many rounds you do, based on an average time per round: 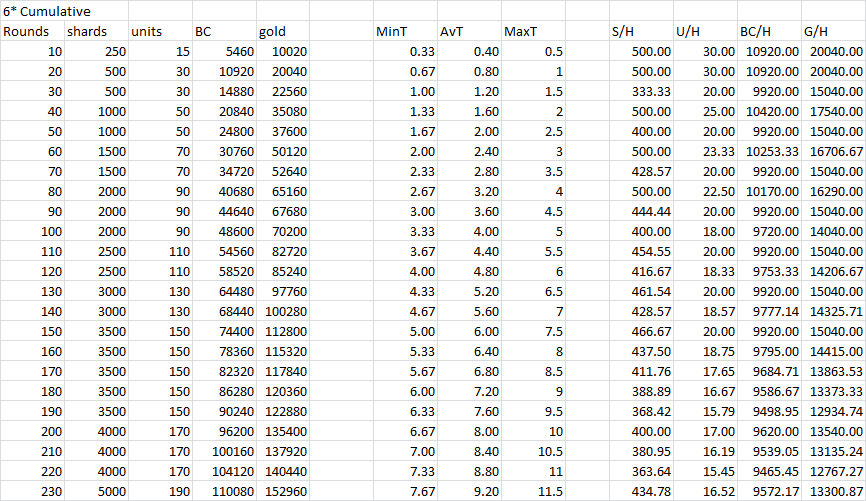 The return per hour fluctuates, because milestones aren't continuous. Interestingly, the overall return per hour diminishes a bit for gold and battlechips, but it holds relatively steady for shards: 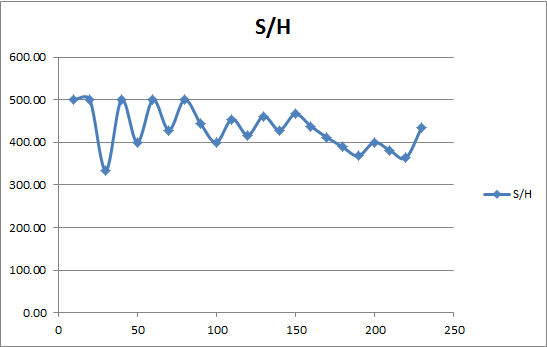 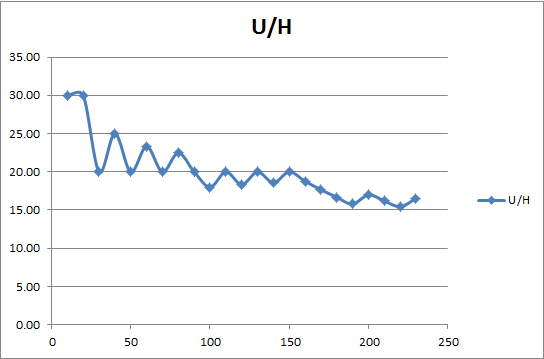 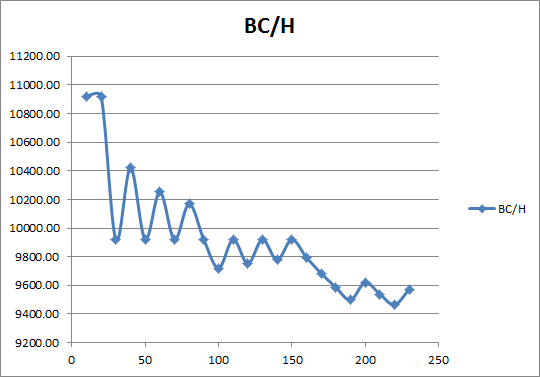 If you grind out the 6* shard arena, you'll average about 430 6* shards per hour. But actually you'll probably average about that much no matter how much effort you put into it, so even if you can't complete the arena, you're still getting about the same amount of shards per hour of effort regardless of how many hours you spend. So there's no "penalty" for doing less than the full amount, the rewards aren't backloaded.

How fast is ~450 6* shards/hour in relative terms? Well, it is certainly way faster than anything else in the arena. But I also compared this to places I thought had any potential to be in the same ballpark. Incursions, for example, award 125 6* shards (and 600 5* shards) per zone in Sector 8. If you can grind out Sector 8, depending on how fast you are you could be doing a zone every five to ten minutes. That equates to between 750 and 1500 shards per hour. But it tops out at zone 15, or 1875 6* shards. The 6* shard arena is about half the return of Sector 8, but of course vastly easier for most players.

You could also get 6* shards in alliance war. 380 6* shards for a tier 1 victory. You can't win them all (well, most can't) but that's the theoretical limit. I'd say that this earning rate is lower than the arena per unit time for most players at much higher difficulty. But there's also season rewards. 30k 6* shards for finishing in the master bracket. Let's say the average player spends about one hour total on alliance war per match up. For some people it is less and for others it is a lot more, but let's just call that the average here. The max return is then 380*12+30000 = 34560 over 12 hours, or a whopping 2880 6* shards per hour spent. But this is for a master bracket alliance that almost never loses and spends very little time on war besides hopping in and fighting. Realistically speaking, the actual return is going to be lower. And only the very highest tier war alliances can get this kind of return. Once you get below Platinum 3, your 6* shard return drops below the 6* arena . Of course, war generates other rewards: this doesn't say that the shard arena generates more rewards than war, this just attempts to place the 6* rewards in the context of high earning rates elsewhere in the game.

I think overall the return on time investment in the 6* arena is pretty good, relative to the game in general. It is way faster than most ways of earning 6* shards, and in the ballpark (or at least the parking lot of the ballpark) of some of the highest, which aren't even open to most players.

The bottom line for the shard arenas in general is that the 5* shard arena offers pretty good return on investment for relatively little time. Certainly, it is roughly in line with other 5* shard opportunities that have come up in the past. A few hours of grinding gets you 10k 5* shards, plus units gold and battle chips. I think everyone with at least a little time to burn should do this one, even if they don't reach the final milestones.

Whether you should do the 6* instead of 5* comes down to personal preference and situational concerns. If you're in a point in the game where you're focusing on 6* champs, do the 6* arena. Don't let the large number of rounds scare or frustrate you. Just do what you can. It is basically over 400 6* shards per hour, whether you do one hour or four hours or ten hours.

Whatever you do, don't do the 4* arena unless you are a completist (which I am) or you're sure you can complete both the 6* and 5* arena with time to spare. In my opinion it isn't worth doing unless both the 6* and 5* arenas are done. One exception. You've done the 5*. You're grinding through the 6*. You just made it to milestone 8 (2.6 million) and you know you aren't going to get to milestone 9 (3.4 million). If you find yourself in a huge milestone gap like that, then and only then switch to the 4* arena and pick off the easier rewards.
67
«12»