Platinumpool would argue that this party will never end - but fear not, Summoners - we will make sure you’re not stuck at one of Platinumpool’s parties for eternity. Platinumpool is fussing, but no, I will not repeat Platinumpool’s rant, no matter how much he wanted me to. Solo Objectives and Getting Key

Note: You will have to play other parts of the game in order to complete these Solo Objectives, e.g. Arena, Event Quest, etc.

One Key will unlock the Quest once only!

Then, use the Key to unlock the Quest. The Quest will require NO ENERGY to complete. You can only bring in three (3) Champions this time. In the Quest, you will see seven (7) paths. It is YOUR CHOICE to either do the paths, or you can take the straight path to the Boss (yes, there will be a straight path to the Boss). But, if you skip the other paths, you will also skip the rewards on those paths. Simple.

In case you quit the Quest before you finish it, any rewards you have already earned will still be yours to keep; but you will not get the Key back.

Note: Fights along the other paths do contribute to the other Solo Objectives (in addition to the above daily ones) so it would be wise to do them, if you can!

IMPORTANT **Images below are intended to show Quest paths structure only. Champions and reward items will be randomised from a limited pool, per above. 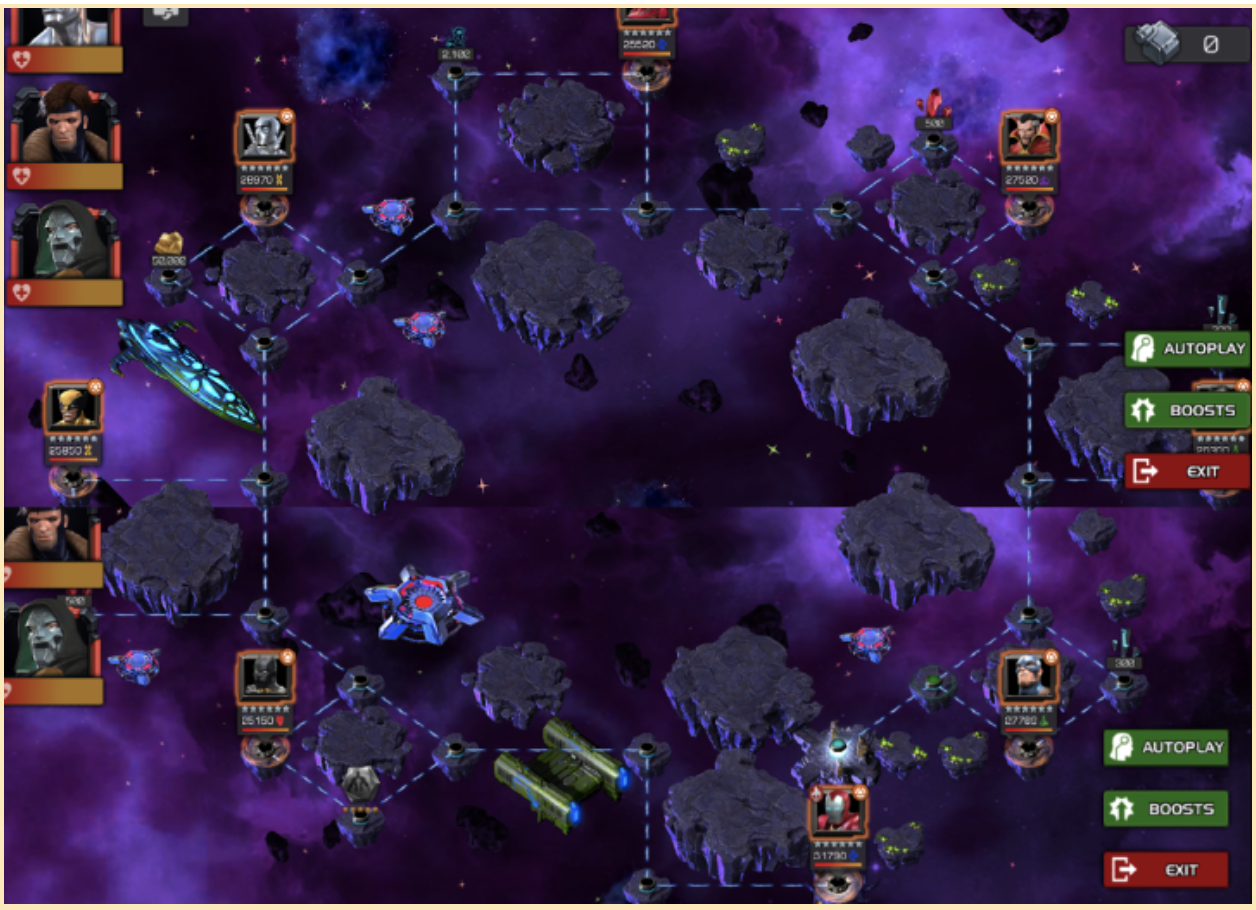 Global and Other Buffs 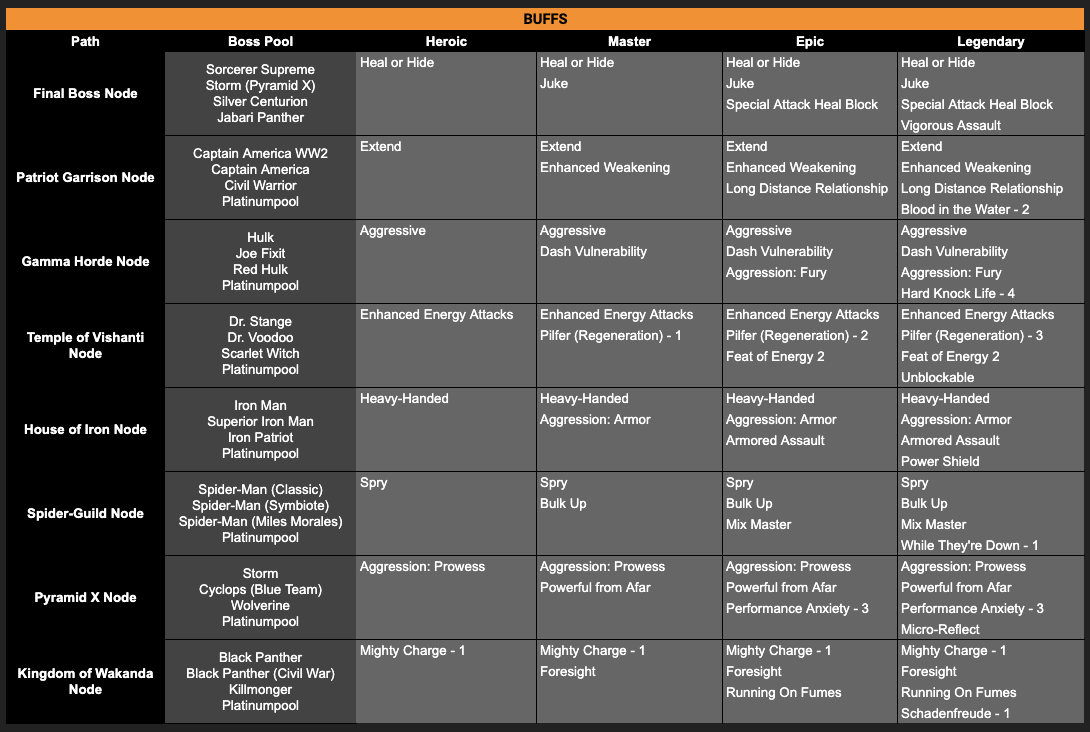 Juke: Finishing a 5-hit combo with a Light or Medium Attack grants the Attacker a Fury charge, increasing their Attack Rating by {7}% per charge. Up to {10} charges can be gained and all charges are lost when performing the same combo-ender twice in a row.

Vigorous Assault: Increases Defender attack power and makes ALL attacks unblockable as long as the Defender is under the effects of a regeneration buff.

Extend: The Defender's Buffs and the Debuffs they inflict last 150% longer.
Enhanced Weakening: Weakness and Fatigue abilities are 40% more effective.

Long Distance Relationship: While close to the Defender, the Attacker gains a Weakness Debuff every 3 seconds, reducing their attack by 10% permanently. Staying far away from the Defender causes these Weakness effects to gradually fall off.

Blood in the Water - 2: While the Attacker is suffering from a Debuff, the Defender gains a Passive Fury granting +150% Attack Rating lasting until all Debuffs on the Attacker expire.

Aggressive: The Defender becomes more aggressive, meaning they are more likely to Dash in and execute Heavy attacks.

Aggression: Fury: Every 2 seconds, the Defender gains a Fury passive increasing Attack Rating by 50% per stack. When the Defender is struck, remove a stack.

Feat of Energy 2: When the Attacker reaches 2 Bars of Power, the Defender gains a Power Gain Buff granting {100}% of a Bar of Power over {4} seconds.

Unblockable: All the Defender's Special Attacks are Unblockable.

Heavy-Handed: The Defender's Special Damage increased based on Armor.

Aggression: Armor: Every 2 seconds, the Defender gains an Armor Up passive increasing Armor Rating by ~50% per stack. When the Defender is struck, remove a stack.

Armored Assault: While the Defender has a Armor Up Buff active they gain +65% attack rating and their attacks become Unblockable.

Spry: Each time the Defender Passively Evades an attack, a Fatigue Debuff is placed on the Attacker, reducing their Critical Rating by 1000% for 15 seconds.

Bulk Up: While the Attacker is charging a Heavy Attack, they rapidly gain Fury Passives that increase Attack by 1%. These Fury passives can stack up to 200 and are removed upon taking damage.

Mix Master: If the Attacker launches the same Basic Attack twice in a row the Defender has a 100% chance to Evade.

While They're Down - 1: Each time the Attacker is inflicted with a Non-Damaging Debuff, the Defender gains a Fury Buff granting 120% Attack Rating for 6 seconds. This Fury effects does not stack multiple times.

Aggression: Prowess: Every 2 seconds, the Defender gains a Prowess Passive increasing Special Attack damage by 50% per stack. When the Defender is struck, remove a stack.

Performance Anxiety - 3: After the Attacker uses a Special Attack, a 15 second timer is started. If the Attacker activates another Special while this timer is active they are inflicted with a Glancing Debuff for 6 seconds giving their attacks a 100% chance to Glance. Glancing Hits cannot be Critical, deal 50% reduced damage, and suffer -100% Offensive Ability Accuracy.

Micro-Reflect: When this Defender Glances an attack, a portion of the damage is reflected on the Attacker.

Mighty Charge - 1: While performing a Medium dash attack, the Defender Purifies all active Debuffs and becomes immune to future Debuffs until the dash ends.

Foresight: Intercepting the opponent’s Dash Attack with a Basic Attack grants the Attacker a Passive Fury charge, increasing their Attack Rating by {200}% for {5} seconds.

Running On Fumes: While close to the Defender, the Attacker gains a Fatigue Debuff every 3 seconds, reducing their Critical Rating permanently. Staying far away from the Defender causes these Fatigue effects to gradually fall off.

Schadenfreude - 1: Each time the Attacker is inflicted with any Debuff, the Defender gains a Fury Buff granting 120% Attack Rating for 6 seconds. This Fury does not stack multiple times.

This Quest will be available in 4 Difficulties and the Keys are universal (there will only be one kind of Key!) so you can use the Key to unlock whichever one Difficulty you want to do:

So, your April (and a bit of May) days will look like: If you run the paths every day, you should be able to complete all the Solo Objectives (get all the rewards there) and also gain an assortment (randomised) on the path rewards. As the path rewards are going to be randomised daily, you will not be able to predict and calculate the max gains there - sorry.

**Note that the Path Rewards listed below are the pools from which the path rewards may present daily. So, these are the possibilities of rewards that you MAY see along the paths daily. There is NO GUARANTEE of any particular reward showing up at any exact node or exact time.