Magrailothos Posts: 4,116 ★★★★★
May 2021 in Suggestions and Requests
Thor: The God of Thunder (5/65)
This won't restore Thor to his pre-12.0 glory, but I'd love him to get a Tune-Up with a bit of ability expansion like Angela did. This would probably fall into the category of a moderate rework; but not an overhaul: he's still largely the same champion. I've put this in the semi-official Champion Improvement Thread; but even the moderators seem to have given up on pointing people towards that; so I thought I'd create a thread and put it here, too. Maybe it'll get some likes, or some disagrees, or inspire someone else to write their own version.

That's part of the problem, though: There's no challenge and no versatility, no complexity to his playstyle. To inflict anything more than the most mediocre damage, he's totally dependent on stunning the opponent. He has no other way of breaking anyone's armour if he isn't Awakened (which seems crazy, looking at champions like Medusa or Cull Obsidian!), and if they're immune to stun or Armour Break, he's completely neutered. Thor's basic Fury is fairly mild (30% of overall attack), although the up-time isn't too bad in longer fights. The Fury from his Sig is pitiful: it grants him barely +10% Attack.

This (moderate) rework is intended to make Thor a bit more interesting than he currently is; and I've tried to give him an ability to cause damage that isn't almost totally dependent on Armour Break (thus requiring you to adopt a Parry-Parry-Parry playstyle, whilst Awakened with high Sig). He might well end up doing a bit less damage than he does now at max Sig; however, I'm hoping he should be able to be effective even if the opponent is stun-immune, and/or armour-break immune. He'll have a few more buffs going on, as befits a cosmic champion; and uses a few abilities like Shock that simply didn't exist at the beginning of the game. I've also tried to incorporate a Fury ability more suited to someone known for fits of 'Warrior's Madness'. Hopefully it all adds up to a champion a bit more interesting to play with than he currently is... 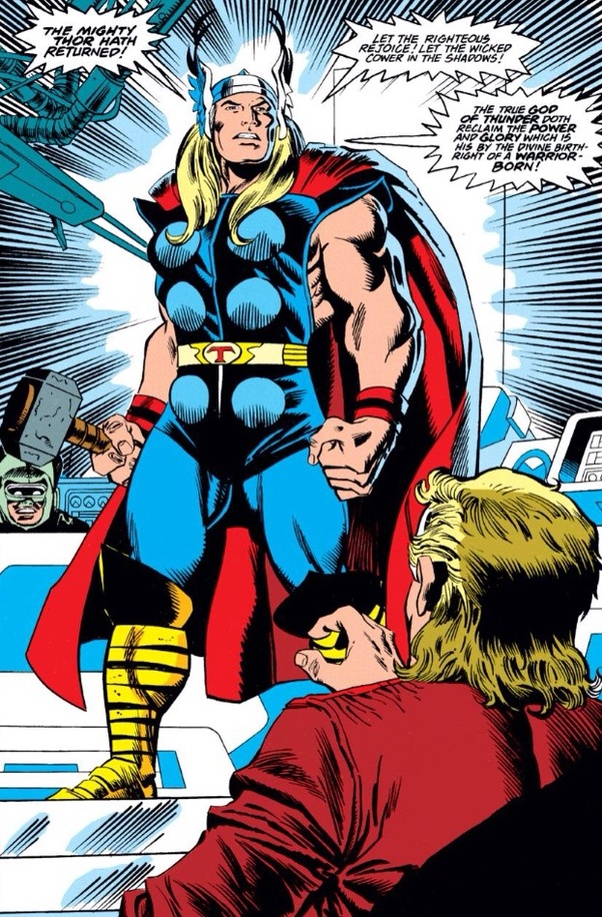 Passive: Mjolnir
Heavy Attacks have a 70% chance to Armour break (450 break for eight seconds) rising to 100% chance if the Attack is charged for 0.8 seconds.
When Thor unleashes "That which smashes", Mjolnir tears his opponents apart. When he would inflict Armour break, his opponent additionally suffers a proportionate burst of Direct Physical damage (1* damage per point of Armour Break), which increases with Thor's modified Attack rating.
If the opponent resists the Armour Break due to an Immunity, this burst damage is increased by 50%.
*Damage rises with rank: 0.2 at R1, 0.4 at R2, etc. It will be boosted proportionately by any buffs, nodes or synergies that increase Thor's Attack rating.

All Attacks
12% chance to trigger Fury (+1228 Attack for 6.5 seconds).
Armour break durations increase by 30% whilst Thor has a Fury buff.

Special Attacks I'm borrowing the 'Armour Pulverised' ability from CMM's Heavy-Intercept, here. It'll allow him some ability to manage armour-heavy opponents who are immune to Armour break (like Colossus), or who are immune to debuffs. Also, my feeling is that being hit by Thor's supposedly devastating SP3 really should 'stop' an opponent like Thing or Kingpin; but that it specifically shouldn't work against old nemeses like Juggernaut

Warrior's Madness:
If Thor goes fifteen seconds without landing a hit, he gains a Madness buff for eight seconds, granting +1842 Attack, +440 Armour and Block penetration, and +25% Offensive power gain. When it triggers, he also gains an Unstoppable buff lasting 2s. Madness has all the properties of a Fury buff, for the purposes of abilities that interact with Fury. Thor cannot trigger additional Fury effects during Warrior's Madness.
Warrior's Madness cannot be prevented with ability accuracy reduction. The timer restarts after Thor's Madness ends.
Largely a defensive ability, at least till he's Awakened, this is very much in keeping with Thor's comics character; and may help Thor a bit if he's defending a node.

Signature Ability: Synergies:
Aside from the 'Believer' synergy with P2099, these are new unique synergies for Thor. Synergies carried by other champions are unchanged.
Loki: Brothers in arms Hela/Angela/Thor (Ragnarok) - Sibling Rivalry
Heimdall - Warriors of Asgard
Odin: Father and Son
Punisher 2099 (synergy carried by P2099): Believer
3