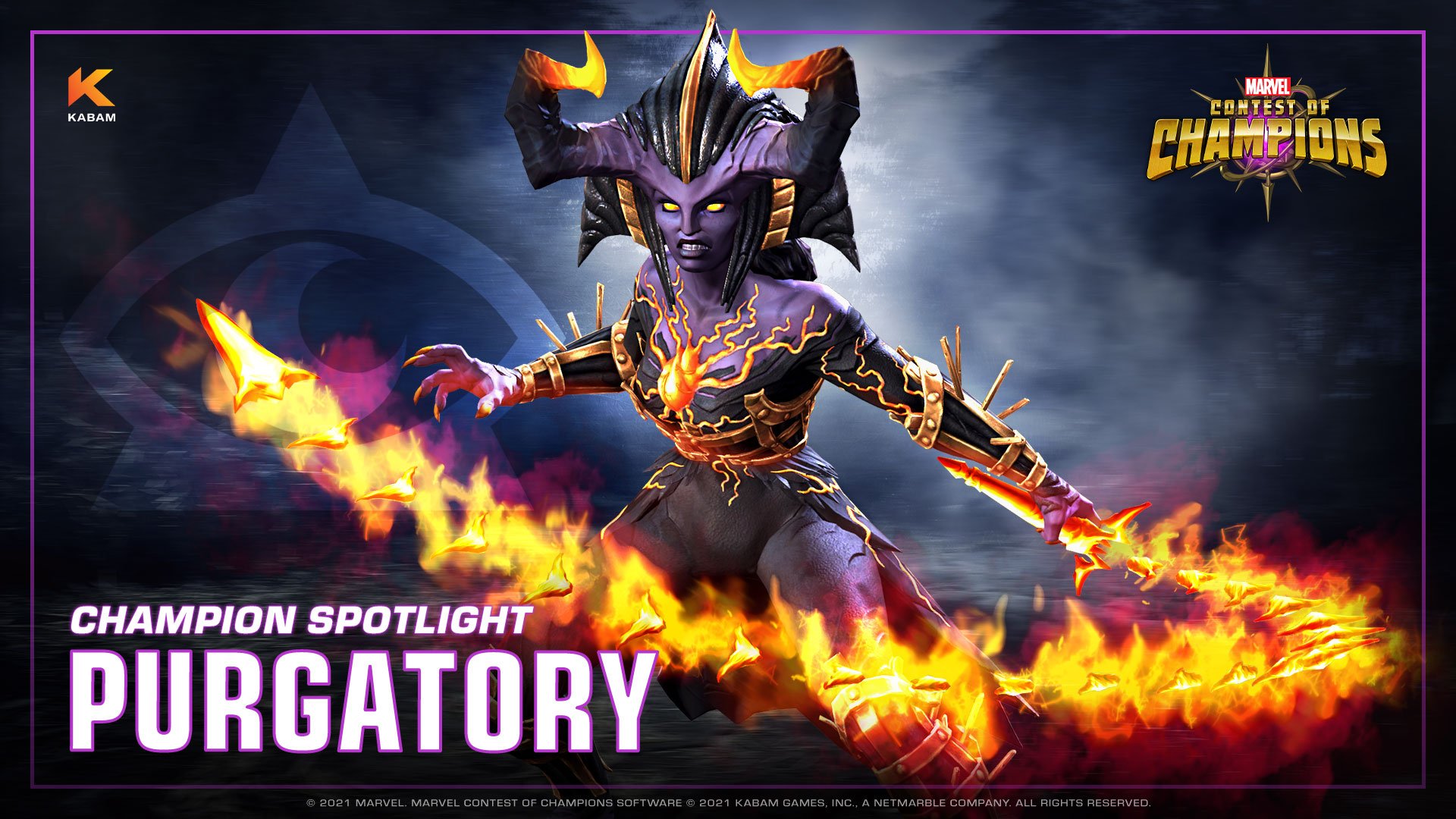 About Purgatory
Purgatory is a twisted, demonic creature, from an alternate timeline where Morningstar was finally able to defeat Guillotine and steal her sword back. With the blade finally back in her hands, the demonic presence within it overwhelmed Queen Haasen and convinced her to slay Guillotine. Doing so corrupted both her body and soul, transforming her into Purgatory and sending her on a bloodthirsty rampage unlike any seen in a millennium.

Purgatory has an aggressive playstyle, entering her enhanced Demonic Rampage state, then crushing the Opponent with a flurry of Special Attacks and Incinerates. She starts each fight with 0 Bloodthirst, and landing any attack increases Bloodthirst and grants her some bonus Power. Once Bloodthirst hits its maximum of 100, she enters Demonic Rampage for a period of time, granting her extra Attack Rating, bonus effects on her Special Attacks, and her second Medium Incinerates the Opponent. Demonic Rampage is paused whenever Purgatory fills a Bar of Power, so try and do so as many times as possible to really maximize the impact.


Always Active: Developer’s Note: It’s important to make note of Purgatory’s Class Soul Abilities farther down her info page. Even if they’re not listed under this header, they’re always active, and can have a significant impact on the fight.

All Attacks - Bloodthirst - Max: 100 Developer’s Note: Bloodthirst is Purgatory’s main mechanic. It’s triggered by either Champion’s attacks, then grants her a significant amount of bonus Power, and gives her access to her potent Demonic Rampage ability. The fact that it falls off over time means she needs to stay aggressive in the fight to consistently keep her Bloodthirst high.

Demonic Rampage - Passive Developer’s Note: Demonic Rampage gives Purgatory a large boost to her Attack Rating, and she’s able to consume her own Power to inflict an Incinerate. While consuming her own Power might seem like a negative effect at first glance, careful timing of her attacks and managing her Power meter can allow her to cross back and forth over Power thresholds repeatedly, by spending power with Medium 2, then gaining it back with Bloodthirst. Crossing these thresholds will keep Demonic Rampage paused, and really increase Purgatory’s damage output.

Special Attacks Developer’s Note: Purgatory gains another huge Fury Buff when launching Special Attacks during Demonic Rampage. Managing her Specials against the Power gained from Bloodthirst and the Power consumed via Incinerates takes a bit of skill and practice, but is the key to unlocking her true potential.