Sasquatch's SP3 is broken, and means he can't be used as intended

Magrailothos Posts: 4,113 ★★★★★
October 2021 edited October 2021 in Bugs and Known Issues
As we all know, Sasquatch was designed (by Kabam Broccoli) as a relentless beat-em-up champion who can cause huge Damage.

He's got what sounds like a minor Power Drain ability that's actually key to his entire playstyle, as: during his Wrath of Tanaraq (WoT) phase, Sassy gets a big boost to his Combat Power, and throws a lot of Special Attacks. Obviously this gives the opponent loads of Power, but fortunately, during Wrath, his Special Attacks should drain 5% of the opponent's Power to keep them off their own (hugely damaging) SP3. Like Dr Doom, it's a high-risk form of Power Control that relies on keeping your opponent at a high level of power. Sasquatch's is particularly dangerous to use, as it only works if you're already in WoT, and if you've pushed your opponent to their SP3 before throwing your Special Attack. But if you use it right, you can use this ability to throw Specials relatively safely at an opponent you're tearing to shreds.

Except that, right now, you can't... It doesn't work on his SP3, although it does work on his other Special Attacks. But that's a fairly large problem for Sasquatch, whose Combat Power Gain helps him throw a load of Specials. It's what he was designed to do.

This Gif shows the ability failing on Sassy's SP3 (in Variant 5, where I've been using him a lot lately): 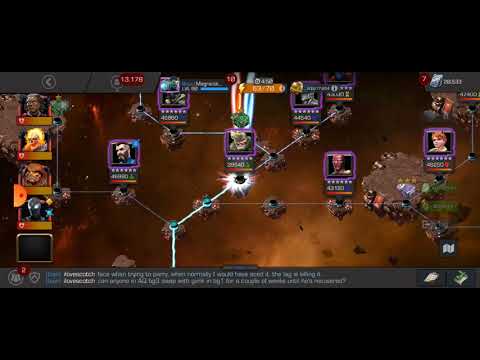 Here's Sassy's ability from his Spotlight:

So that's it: Sasquatch can't be used the way he was designed to be used right now, because his SP3 Power Drain fails, turning a fun "high risk/high reward" strategy into a less-appealing "certain death" strategy 😬.