A few months back, Bishop had a really decent buff. In fact it's taken him from a self-destructive nothing to a solid champion. Not necessarily the best. But definitely a really good champion for a developing roster.

But what about a developed roster?

I recently pulled a 6* Bishop. I was initially really pleased, but I couldn't help thinking... What was he going to do for me that my 5/65 Havok doesn't already do? I've been playing with Havok for years, and really like him as a champion.

I've spent a bit of time thinking on this, and testing them out, as detailed below. Initially it was a sort of pro-con list to help me decide if I was going to R2 Bishop.

TL:DR = I took him to R2 anyway: They're both great. Bishop is probably be the best overall. But I'd suggest that you stick with Havok if you run suicides.

Energy resistance
Both are good, but Bishops is definitely higher: 4173 Vs 2100. That's hugely better as a flat value; although thanks to Diminishing Returns, the difference as a percentage is 'only' around 67.6% Vs 51.2%.

Prowess/Special Damage
Both stack tons of Prowess fairly easily. Bishop can get 30 Prowess (+300% Special Damage), but it can be harder to hold onto as he converts it to Health any time he holds block. Havok can only stack ten Prowess at a time (+100% Damage), but his can persist for more than one Special Attack as they aren't consumed immediately.
Also, whilst Bishop has more Prowess, Havok also has Attack boosts on his SP2 (+175%, unless the opponent is Armoured) and SP3 (up to +400%, based on Plasma charges). So who's got the better Special Damage overall? It's very hard to work out on paper: A fight against Winter Soldier is probably the easiest way to find out...

Punish Purify
Both champs punish opponents who remove debuffs.
Havok's ability only works on his own Plasma Build-Up debuffs, which he can inflict a lot of, at a distance, and inflicts 975 damage each
Bishops works on all debuffs, including Parry-stun, and causes bursts of 2066 damage. Bishop clearly has the edge here; and this can cause quite ridiculous levels of damage to opponents repeatedly purifying his Incinerates following an SP1.

Unique Damage
Havok has a unique form of DoT, and actually this is still probably under-appreciated. Plasma Detonations are only the tip of the iceberg - his Plasma Feedback is where the real damage lies. It does rely on debuffs, and landing Heavy attacks, which can be a weakness. Havok can use this ability to turn Energy DoT against the opponent: this can start to inflict really quite insane damage on nodes like Energy Adoption.

Bishop also has unique DoT, but in his case it relies on him Overloading. He can then inflict passive damage at a distance. It's very clearly a lot less damage than Havok's, but doesn't require him to do anything like landing Heavy attacks. In scenarios like Energy: Adoption, Havok will usually inflict a lot more damage than Bishop. (Don't believe me? Check this out). On the other hand, Bishop will definitely punish the opponent who makes him bleed a lot more than Havok does.

Unique Utility
Havok: Bishop: Importantly, the Awakened benefits don't stack: you only get the one relevant to your power level. So if you want to have Stun-Immunity available in a subsequent fight, it can take a bit of careful planning.

Winter Soldier damage comparison:
So, I took them both against Winter Soldier for a damage comparison. No suicides, no synergies. I was a bit surprised how close it was; particularly given that I was comparing a 5/65 Havok to a 2/35 6* Bishop, who has a substantially higher Attack. When I first tried for SP3s, Havok easily out-damaged Bishop thanks to his awesomely destructive SP3. Trying different offensive strategies, the final results looked like this: 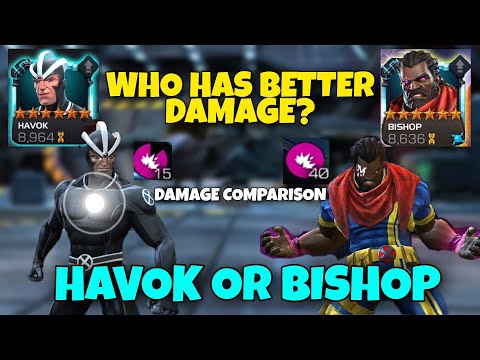 The gamer starts by taking Bishop to SP3, which is a mistake that slows the fight down. I did the same in my first trial, playing by interweaving SP1s (for DoT) and SP3s (just to see how much damage they did). A separate fight favouring SP2s made very clear that Bishop needs to avoid his other Specials: his big Damage is tied into his SP2; and also that it's crit-dependent.

You can work out the damage of Bishop's multi-hit SP2 by working backwards from the follow-up incineration; which varied from 1066-1766/tick for 10s depending on big yellow numbers. So his SP2 was (including the Incinerate) inflicting 51,777-85,777 damage in total (substantially more than his SP3, on average). I threw all of them at 30+ Prowess, but sometimes you get lucky with multiple crits; and a larger follow-up Incinerate.

Of course, if Havok was a six star, he'd have had about an additional 9% Attack, although slightly lower combat power gain. That'd get his Fight time down to about 3min 10s. About fifteen seconds slower than Bishop. So their total damage is pretty close, in the Winter Soldier scenario. Obviously in subsequent fights, Bishop can start with pre-loaded Power, which Havok can't.

Weaknesses:
Havok isn't quite as good against Armoured opponents, who are resistant to his Plasma Detonations and the additional damage on his SP2. That includes a lot of Armour nodes. On the other hand, played offensively Havok's Plasma Detonations and SP2 aren't usually going to be the damage sources you reply on. Havok also lacks any Regenerative abilities, and benefits from landing Heavy attacks, which Bishop doesn't need to do.
However, Bishop is reliant on his SP2 for big damage; which ideally needs to crit. Havok's SP3 doesn't have that problem. Also, Bishops damage from SP1 and SP2 are seriously impaired if the opponent is immune to Incinerate. Opponents with Critical resistance or Incinerate Immunity will therefore be tougher for Bishop. Fortunately neither is as common an ability as Armour.

Who should you choose?:
These two champions have enough similarities that you don't need to have both; their damage is pretty closely comparable, and either will work in a variety of settings. Both have their own strengths on AW defense.
Their different utilities may appeal differently to different Summoners - choose your preference! I think the biggest advantage Bishop has is that his ability to manage tricky Skill defenders like Korg, Jabari and Agent Venom is considerably superior to Havok's. I think that's potentially enough to make the choice easy for some people.
They have different unique Synergies; which may also help to make the call for you. If you run the Quantum Trinity, Havok's synergy with Wasp is a cracker! Bishop has a similarly good one for Howard the Duck.
Apart from their differing utility abilities and synergies, the biggest difference is probably how they handle Suicides: If you use them, you'll almost certainly want to go with Havok.
Why? Because it's very clear that Bishop's big damage is in his SP2, which will inflict Recoil. Havok's big damage is in his SP3, which doesn't.

Although Bishop can remove his Double Edge debuff, Double Edge will actually harm Havok less than Recoil, as long as he has Willpower. And Bishop's Regeneration is unlikely to recover the health from multiple Recoils since he has to hold block (taking chip damage) to access it. It can even be turned against him by opponents like Warlock or Void.

Personally, I'm happy to have taken my Bishop to R2; primarily to have a great option against tough defenders with Tenacity and shrug-off mechanics; and he's a definite R3 candidate. But I'll definitely not be retiring Havok just yet as there are scenarios and opponents that he handles much better than Bishop does. And I wouldn't criticize anyone who's happy to stick with Havok, if they find themselves in my situation.
But if I drew them both, early on in my game... Honestly, I think I'd have gone with Bishop, and not looked back.

Hope you enjoyed the write-up; congrats for anyone who stuck it through to the end!