Adventure Into The Savage Wild this New Year! Join Us on January 5!

Happy New Year, Summoners! We look forward to an exciting 2022 and happy to have you all along for the ride!

The Savage Land is a hidden prehistoric land. Its location, a well-guarded secret. Now, with the help of special compasses, you can explore this vast jungle and battle Champions in search of lost treasures. Quests will be released weekly and will contain gated paths and hidden rewards.

All quests have four (4) paths each, each requiring a different colour Compass to unlock. E.g. Quest 1 will require Red, Blue, Yellow and Green Compasses to unlock all four (4) paths. Please see Compasses section below for more details.

***Cavaliers and up will also get to explore an extra path in Quest 4 (Legendary Difficulty) with a special Platinum compass, for an extra special hidden treasure (see Rewards section for more details)!

Compasses
***Note that ALL Compasses work for ALL Difficulties. Feel free to use them on ANY Difficulty you want. This means you can also do all the Difficulties, if you want! 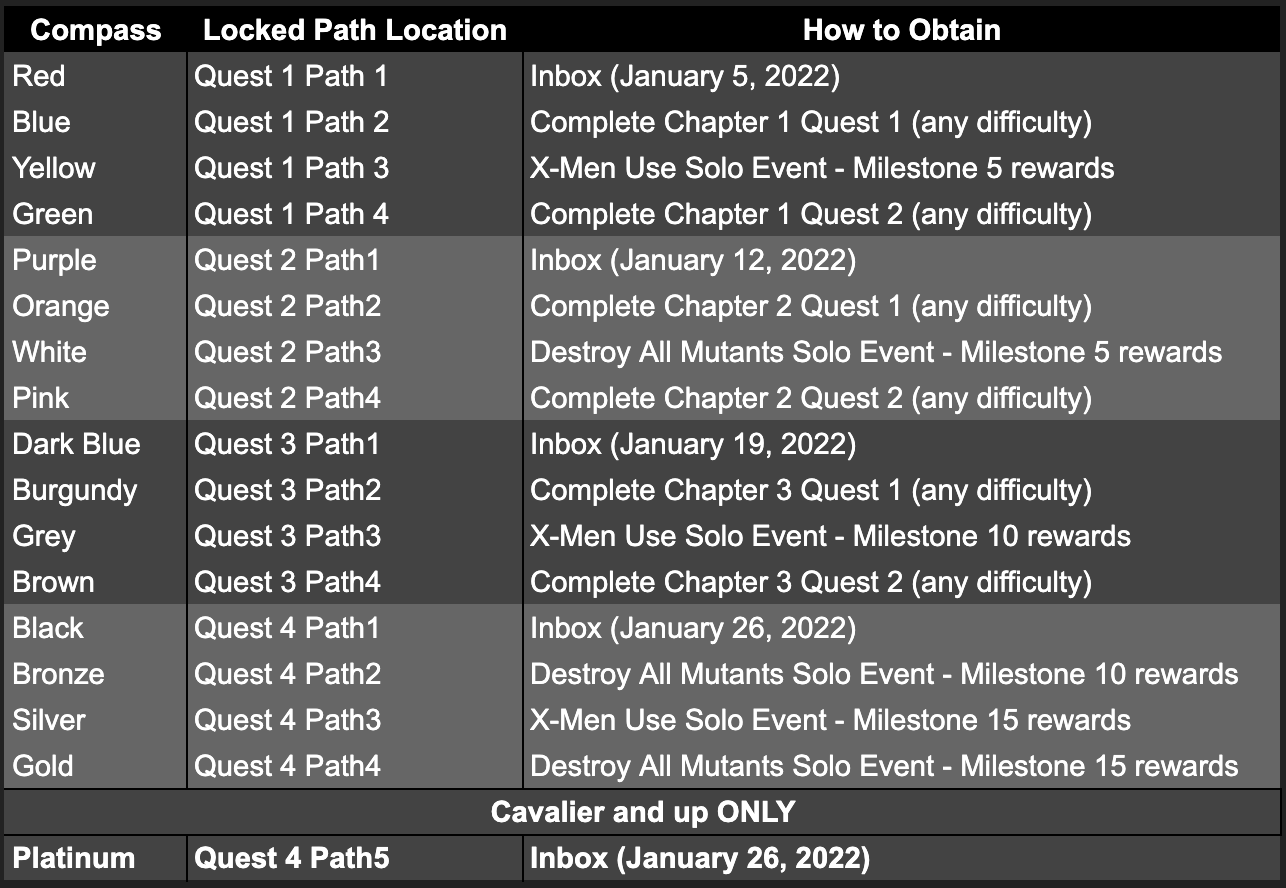 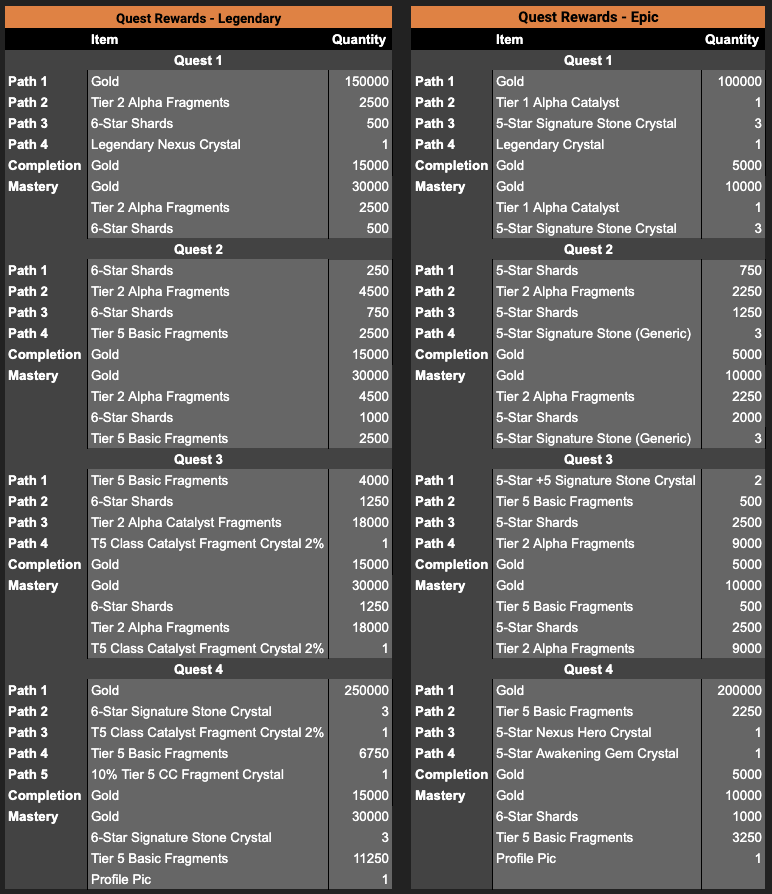 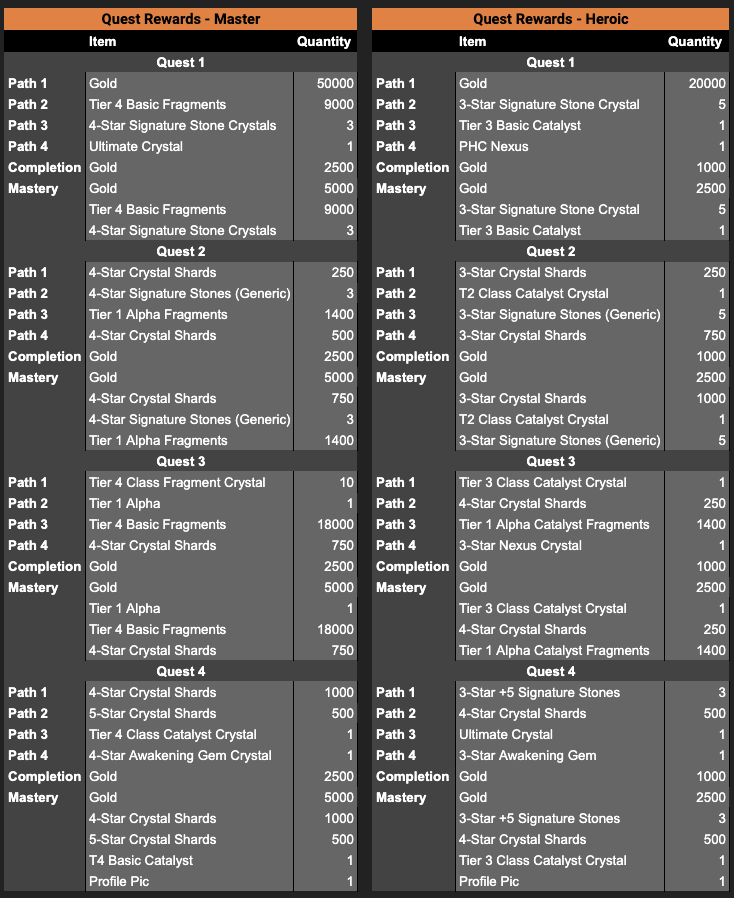 Every fight in each Quest will also feature a new experimental gameplay mechanic called Strikers! You can summon a specific Striker (chosen by a Quest buff) in a fight by pressing a new button above the Special Attack button. Each Striker has a different effect that they will apply to the Attacker or the Defender depending on the Striker. When you summon a Striker right after landing the 4th Light Attack in a combo, the Striker’s effect is enhanced. Strikers are available right away at the beginning of a fight, and after they are summoned there is a meter that must be built up before they can be used again. Some build up over time, while others build up by landing Hits and by being Struck.

***Cavaliers and up: Legendary difficulty contains a special 5th path in Quest 4 that makes use of all four (4) Strikers and features some tougher fights but also a better reward!

Complete the Searching for Directions Solo Objectives by participating in this month’s side quests. Rewards include Compasses and this month’s Crystal Shards.

X-Men Use
How to get points: Win fights using members of the X-Men.
User title: “Brotherhood of Mutants”

Destroy All Mutants
How to get points: Win fights against Mutant Class Champions.
User title: “Toady”

The Anthropomorphic Crystal is available in Grandmaster and Cavalier.

And finally, don't forget to check out this month's side quest video with Kabam Boo, and special guest appearance from Dorky Dave!