I put together my predictions for expected champions for the coming year. This is using the big road map image they sent out a while ago combined with some general hypothesizing based on upcoming Marvel events, as well as the general layout of the image with who is connected to who. First thing, this assumes that all these champions will be released in the coming year, but of course this could be the plans for the next year, two years, etc.

First let's take a look at all the Marvel Movie/TV events happening this year. I have ignored the comics only because it doesn't appear there are any planned mega events that aren't more or less rehashing previous ideas/events. There's the Phoenix Resurrection deal going on now (shrugs) and some type of wedding planned for June (double shrugs). Note that a new season of Luke Cage as well as Daredevil has been announced for 2018, but doesn't have a planned release (yet). The recent buffs for Luke Cage though make sense in relation to this as well as my first prediction: Jessica Jones will be playable around the new season releasing. The buffs to Cage make sense when pairing the fact that these will surely have nice synergies together. Anyways, back to the release schedule.

Notice I am leaving New Mutants because it poses an interesting situation. A part of me wonders if the planning for characters in the game around the original movie launch may still happen, since the date the movie was moved was so close to the original planned date.

Now on to the the fun part. Here is the key I have created: 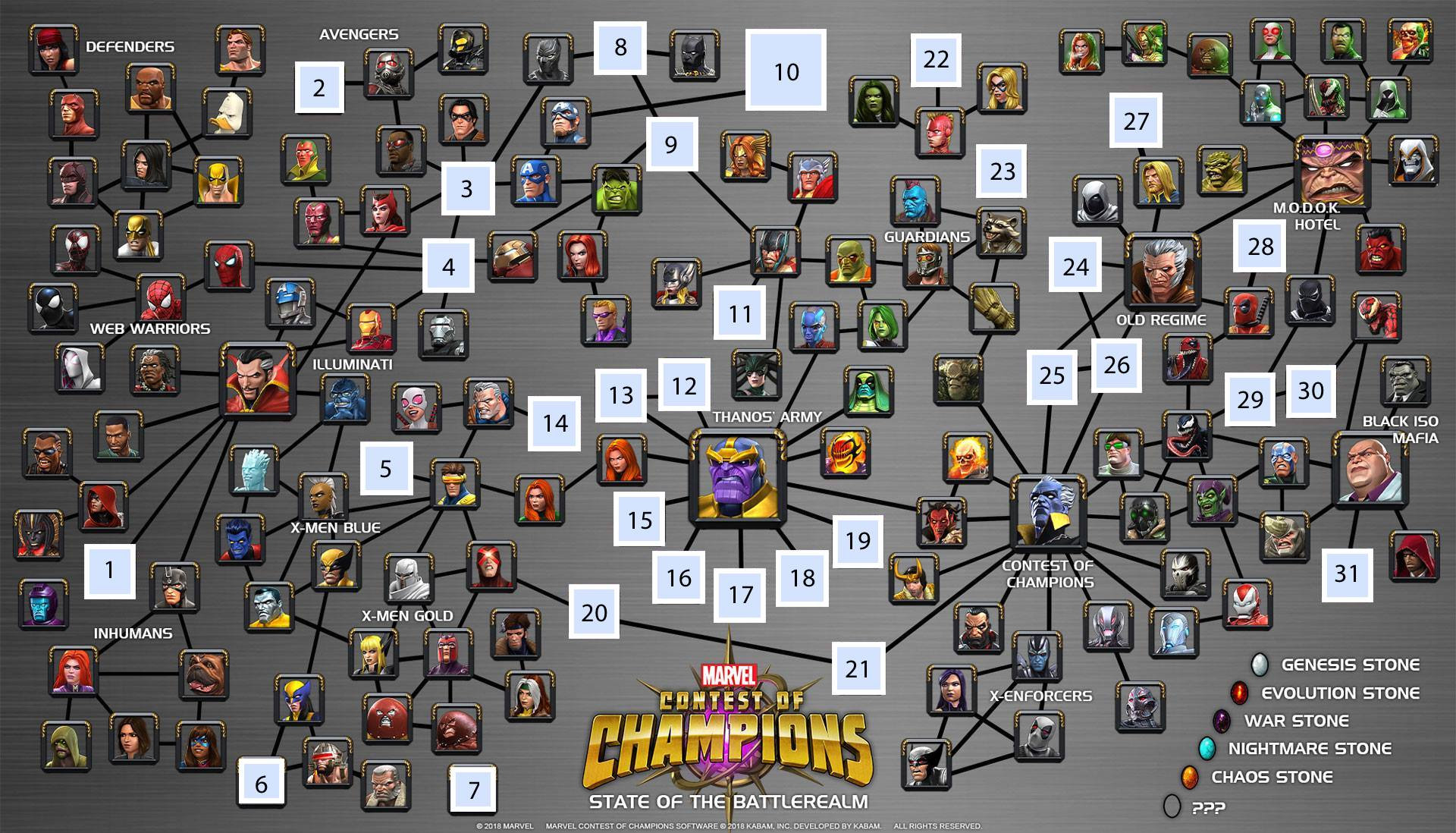 1. Wong -- Like Dr Voodoo and Mordo linked exclusively to Dr. Strange, this makes sense with the upcoming release of Infinity War (and his featuring prominently in the trailer).
2. The Wasp -- with Ant Man and the Wasp coming out, this I feel has got to be the Wasp.
3. Bucky (Infinity War) -- This one is kind of a toss up. I feel there is a lot of space for Avengers Underground style characters, but knowing Winter Soldier's pretty middle of the road place in the meta now, and the fact that as a character he is pretty well liked, this would be a great time to get a new movie specific Bucky.
4. Hulkbuster (Infinity War) -- With this falling directly between Starky, Hulkbuster, and War Machine, I feel this has to be the new Hulkbuster armor from the Infinity War trailer. It is rumored that this version could be in fact, Bruce Banner piloting it...we shall see.
5. Havok -- Brother of Scott Summers, looking at this character having a single link to Cyclops makes sense. Having been in the rebooted X-Men series off an on, he could make a return in X-Men: Dark Phoenix. But in general, this would simply be a cool mutant to add to the roster hopefully in his classic Black and Silver costume from the comics.
6. X-23 (Classic) -- This is a semi wild guess as with so many versions of Wolverine/X-23, I feel this could be any number of characters (including Sabretooth, Cypher, Maverick or any of the other Weapon X mutants). BUT seeing as X-23 places so heavily in the meta as a loved character, another version would seem the best bet, especially considering there is the original comic version clad in black ripe for the picking. This could also throwback to the original version that appeared in the cartoons.
7. ??? -- Clearly another X-Men character getting picked up here, but without any proper connection, it's hard to say. Off the top of my head a prominent character that remains unused --Jubilee?
8. Killmonger -- Already released/announced
9. Hulk (Ragnarok) -- Already released/announced
10. Captain America (Infinity War) -- With Cap's new appearance heavily featured in the trailer, Infinity War will mark a fantastic time to get another version of a character everybody loves. Beyond the beard, this will be an interesting mix up as well since he will be featured "shieldless." This will either mean he's donning the Black Panther gauntlets that you can see in the Infinity War trailer or he will have his new "shield." Which guessing from instances where Cap lost his shield in the past, this will be an energy version newly developed by Stark (referenced as an aside in Homecoming).
11. Beta Ray Bill -- It was referenced that Beta Ray almost made it into Ragnarok and the link here to Thor Ragnarok along a line of Thors in the image is telling.
14. Bishop/Forge -- Another of the awesome mutants from the future, this would be the only characters that make sense directly linked only to Cable. I'd expect Bishop more since he has more direct name recognition and appeared in X-Men: Days of Future Past
12 -13/15-19 Variety of Thanos' Black Order/Miscellaneous Henchmen -- In the comics and ostensibly the movie, there are 4 characters to Thanos' Black Order. I predict this will feature heavily into a mega event in the game that coincides with the movie where you have to battle each one etc. The traditional four are: Corvus Glaive, Ebony Maw, Cull Obsidian, and Proxima Midnight (who made an appearance in the trailer). The curious thing here is the fact there are seven slots. Could leave room for a new version of Loki or other characters who have served the Mad Titan. Also since there are so many, don't expect these all to be playable.
20 - 21. ??? -- These are a little interesting. A link from new school of Xavier Cyclops to the Grandmaster of the Contest. This makes me think 20 could be the phoenix inhabited version of Cyclops that existed during Secret Wars, correlating Cyclops to the power of the Grandmaster.
22. New A-Force character -- The group isn't called out like others on the image, but this group is clearly A-Force established in Secret Wars. The possibilities with this are really exciting. Some top possibilities for me would be: Spider Woman, Squirrel Girl, or Black Cat, OR female versions of existing characters (Hawkeye, Loki)
23. Mantis -- Another freestanding character but in the realm of Guardians, this probably isn't Mantis (because we should see a link to the team here), but I love Mantis! C'mon bring in Mantis!
24-26 ??? -- Obviously new characters from the Contests' "Old Regime" these would have to be some of the Old Regime members who perished as per the story. Since this is unrelated to any Marvel Lore, these characters could be any and everybody (as evidenced by someone like Moon Knight being part of their ranks).
27. Void -- Already released/announced
28. Domino -- A definite here, linked to Deadpool and with Deadpool 2 coming out and her being the big featured new character. Psyched!
29. Venom (Mac Gargan) -- With Mac established in the recent Spider Man: Homecoming and the new Venom movie coming this fall, this seems the most obvious pick for a character linked directly to Venom and along the line of symbiotes like Carnage.
30. Silk -- I can't imagine another symbiote character being released akin to another venom/carnage, so I'm going out there with a favorite of mine from the Spider Verse!
31. Shocker -- This would also link in a way to Mac Gargan venom (him originally being the shocker in both the movies and the comics) and I think this fits in nicely with the rest of the rogues gallery around Kingpin being essentially the traditional "Sinister Six"

Pshew! So what do you guys think! Let me know!
3