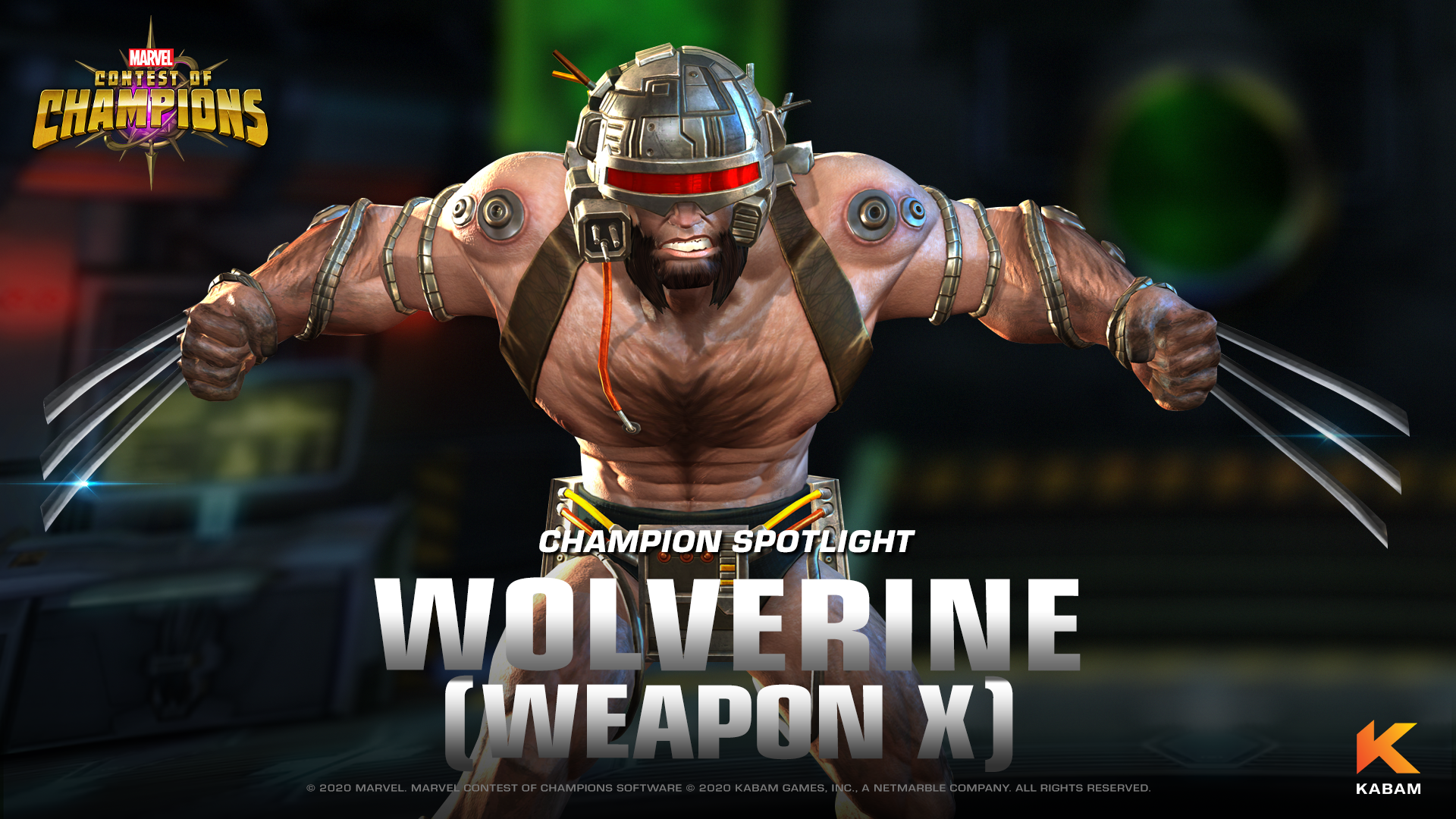 Wolverine (Weapon X) will be awarded as a 6-Star Champion to the Summoners who earned him by being among the fastest in Act 6 Chapters 1, 2, and 3. Your next chance to obtain him is by being one of the fastest to 100% Explore Act 6. Find out more in the Act 6 Chapter 4 Post.

About Wolverine (Weapon X)
Logan became known to the Weapon X program when he joined Team X. While Team X would disband, the Weapon X program was far from finished with him. He would later be the chosen subject for Experiment X, leading to him being captured and taken to a facility near Roanoke, Canada. There, Adamantium was bonded to his skeleton, and his brain was programmed to keep him under control. But after he was “tested” on the population of Roanoke, he was driven into an insane berserk rage by the pain of what he had endured, and what he had been made to do. Breaking free he escaped from the Weapon X program, but though much time has passed, he has never truly recovered from what was done to him by the Weapon X program.

Weapon X is a Berserker, and we’ve tried to make his mechanics and playstyle feel like it! He’s all about building up his Rage Charges until he snaps and that’s when the fun really starts! Once he’s entered Berserk Rage he’s all out offense, starting with a burst of Unstoppable to let him charge through whatever his opponent throws at him, and Unblockable so they can run, but not hide. The only thing to really be careful about is Heal Block, as your primary protection while Berserk is that on-Struck Regeneration.


Rage - Passive Developer’s Note:.
Rages Charges are Weapon X’s primary resource. It’s the thing to watch to tell when he’s going to go Berserk and the thing you want to build when playing as him. The “one of his Abilities Fails to trigger due to Chance” is the less straightforward one, here’s two examples:
1) Weapon X lands a hit, but his 50% Chance to Bleed fails, so he gains a Rage.
2) Weapon X is Struck by an Attack, he gains 1 Rage from his on Struck clause, and then he could gain a second, if his on Struck Regeneration fails to trigger.


Berserk Rage Effects - Passive Developer’s Note:
These are binary effects, Weapon X gains all of them the moment he goes Berserk, and loses all of them the moment Berserk ends. So keep in mind this means any pending Regeneration will be lost. While he’s Berserk, Weapon X just wants to be in his opponent’s face! Using his unblockable to punch through his opponent’s block, leveraging the periodic Unstoppable from his Heavy Attack to proc the on Struck Fury, and counting on his Regeneration to keep him alive.


All Attacks Developer’s Note:
This Bleed serves two purposes: 1) It deals damage over time. 2) It’s also Weapon X’s primary way to build Rage while Attacking, as each time it fails to Apply it gives him a Rage Charge.


When Attacked Developer’s Note:
Similar to the Bleed above, this Regeneration both helps compensate for Weapon X’s lack of Armor, as well as giving him a chance to gain a second Rage Charge each time he’s Struck.


When Charging a Heavy Attack Developer’s Note:
This helps Weapon X get access to his Heavy Attack which is an important part of his loop.


Heavy Attacks Developer’s Note:
And this is why the Heavy Attack is an important part of Weapon X’s loop. It allows him to juggle larger Bleeds that can be triggered with SP1 and SP3, but even more importantly it lets him build his Rage very quickly, and helps keep his Rage up while he’s Berserk.