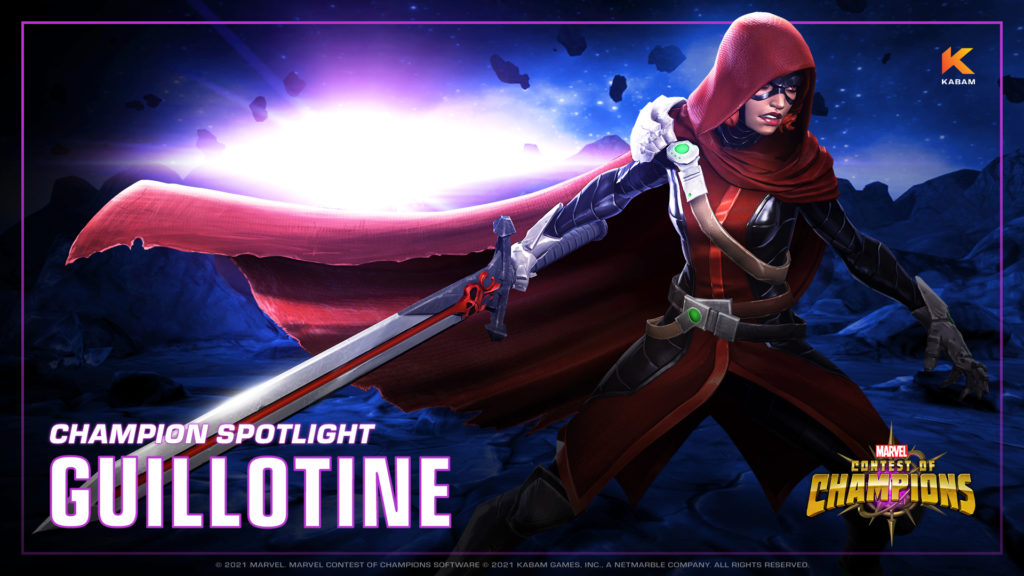 About Guillotine
Born of a mixed French-Algerian heritage, the mysterious Guillotine is the latest in her bloodline to inherit “La Fleur du Mal”, a mystical sword with dark supernatural powers. Across the centuries, many have wielded the enchanted blade – some for good, some for evil. For the will of the sword is strong, and its thirst for blood is limitless, and many have succumbed to its whispers in their minds. The current Guillotine uses the blade to punish the guilty and keeps the sinister instincts of the sword in check …for now!

Guillotine revels in the blood of her enemies! Releasing her blood-thirsty blade on her enemies, Guillotine has a chance of inflicting Bleed debuffs with each swipe, earning her Attack-boosting Soul Charges while recovering a percentage of her own HP for each percentage of damage dealt. Not inflicting enough Bleeds for your liking? Throw a Heavy Attack into the mix to cast a Bleed Curse on the unfortunate opponent, followed by a Special Attack! This will guarantee you Bleeds with each hit, and if Guillotine is Unshackled, you can be sure no Block can match her blade. Once enough Soul Charges have been accrued, activate your Special 3 to inflict a debilitating Degeneration debuff, lasting until all Charges have been spent or your opponent has fallen.

Soul Charges – Max Stacks: 15 Developer’s Note: Wait until Guillotine is at 10+ charges, then unleash her Heavy/Special combo for maximum damage

Heavy Attack Developer’s Note: Guillotine’s Heavy is incredibly important — don’t forget to use it before launching a Special attack for maximum damage output!