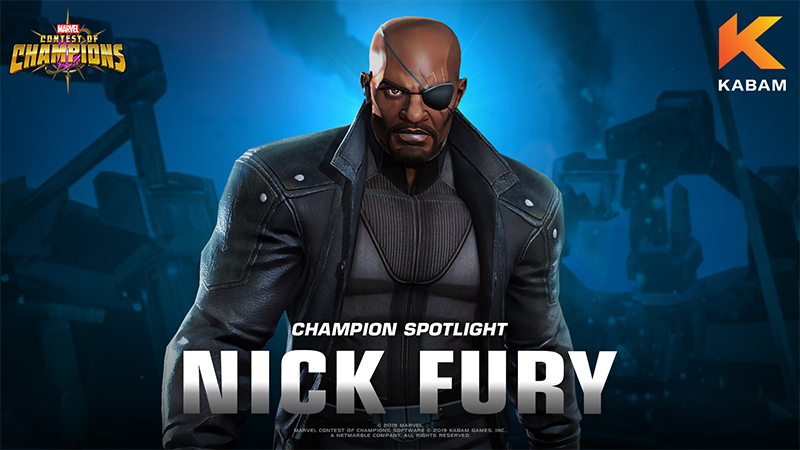 Nick Fury is constantly building tactical charges throughout the fight. The more he has, the more abilities he can utilize -- making him more of a danger as the fight goes on. Additionally, once per quest Nick’s decoy allows him to bypass death, granting him access to some incredibly high damage potential in his true form. A powerful leader equipped with a ton of team synergies, Nick fits easily into many team combinations by providing exceptional utility.

EVADING OPPONENTS & OPPONENT’S THAT CAUSE MISSES HIGH DAMAGE, LIMITED WINDOW UNBLOCKABLE STATE Dev Note: While Nick has an active Fury his tactical charges do not expire, making use of Nick’s infinite duration Fury from his signature ability or a synergy that grants him a Fury, a skilled player can reach a state where Nick is permanently unblockable in a fight.

BLEED IMMUNE OPPONENTS OPPONENT REGENERATION ABILITY ACCURACY REDUCTION Dev Note: When fighting against Nick, bringing a Mutant is always a good choice because it will significantly reduce the chance for him to gain Tactical charges when struck. BATTLE SCARS BASIC ATTACKS INTERNAL BLEED - PASSIVE Dev note: Players can use Heavy & Medium attacks to activate the internal bleed and light combo enders to deal some pretty high damage. Combine this with having many Tactical charges to increase light bleed damage even more.
TACTICAL ADVANTAGE CHARGES - PASSIVE Dev Note: With Tactical Charges continually decreasing over time, Nick will have a hard time reaching 20 Charges without a active Fury Effect. However, with the proper teammates, Nick can get Fury effects from alternate sources other than his own. It's all about who you know after all.
SYNERGY BONUSES RECOMMENDED MASTERIES
DEEP WOUNDS LIQUID COURAGE & DOUBLE EDGE EXTENDED FURY & ENHANCED FURY COURAGE
Post edited by Kabam Miike on September 2019
7
«12»