We’re very happy to announce that Season 8 of Alliance Wars will introduce a brand new Matchmaking system that will improve the quality of matches for Alliance Wars!

A New Matchmaking System is coming for Season 8! Alliance Leaders and Officers will have to choose to Enlist in an upcoming War early. Make sure your Alliance is Enlisted before Matchmaking starts.

The New matchmaking System comes into effect on February 10th! Read on for more details!

This new system will include an opt-in period where Alliances will choose whether or not they would like to take part in the upcoming war.

The system will then match your Alliance with other Alliances that have opted-in for the upcoming war as well.

This new system will help to improve the following:

How does it work?

There are 3 Enlistment Periods each week. Alliances must opt-in to their next war during these times.

When you arrive at the Alliance Wars screen, you’ll notice a brand new Tab titled “Next War”. Here, Alliance Leaders and Officers can decide on the number of Battlegroups that they want to participate. They must then choose to “enlist” in the upcoming war. 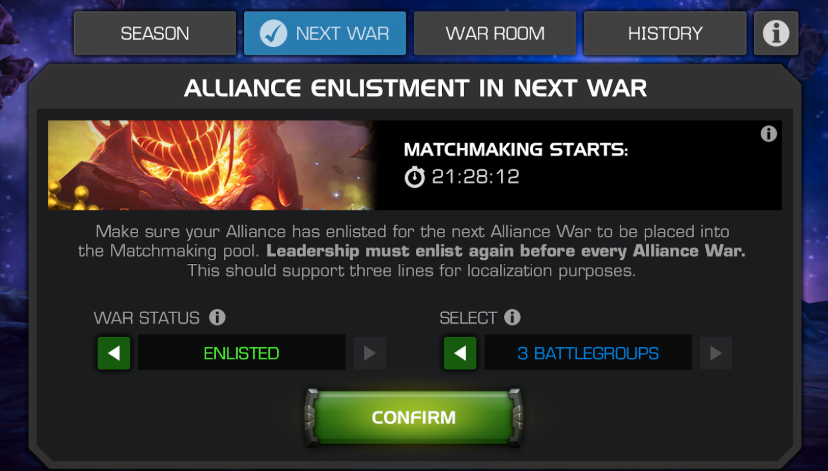 If you change your mind on how many Battlegroups you would like to run prior to Matchmaking starting, you can simply un-enlist, change your Battlegroup choice, and then re-enlist!

Your Alliance MUST enlist prior to the Matchmaking Phase beginning. If you do not Enlist before Matchmaking starts, you will not be given a match for the next Alliance War, and will not be able to participate.

What if there is an odd number of Alliances?

While one of the benefits of this system is that matchmaking will now be done when all Alliances have opted-in, and will eliminate the issue of Alliances not being able to match for long periods of time and missing a war, it does mean that upto 3 Alliances per week (because of Battlegroup choices) may not find a match.

The System will work with a top down method for matchmaking, so these Alliances will likely be brand new, or consist of less experienced Summoners.

For those Alliances, we will be offering a “Bye”. They will be awarded the points, and the rewards for that match. There is a limit to how often an Alliance can be given a Bye, so it cannot be abused.

In order to put this new system into place, and ensure that all Summoners have updated to the latest version of the Game, there will be an extended downtime for matchmaking.

We hope you’re looking forward to this brand new Matchmaking System, and the improvements it will bring to your War Matches!

You’ve probably got questions, so ask away! We’ll update this post to better reflect any clarifications we should make.
Post edited by Kabam Miike on February 2019
27
«1234567…35»