Madcat Posts: 385 ★★★
September 2019 in Bugs and Known Issues
I was running through Variant 3 with a slightly different mastery setup than normal and was facing off against Colossus in Variant 3.3.1 when I noticed that the parry timer was expiring very quickly it seemed like. I started recording and finished the fight, and reviewed it after... and I was sadly shocked. I have 3/3 in Parry, which should mean a 2 second long stun on parry for this node as there is no limber on the local node or Global node. 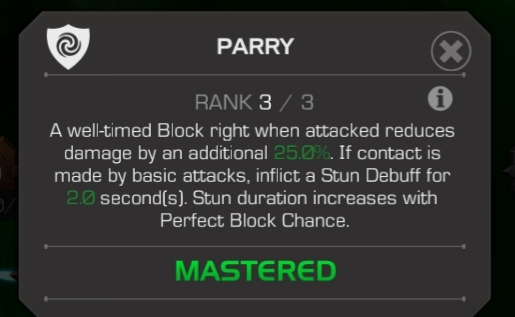 I am trying to keep this as simple as possible, so have recorded a 1.6 second long .gif, but have the video if Kabam is going to try and say "working as intended."

I have included a longer gif as well below:

I cannot believe that this bug has gone unnoticed for this long. This would mean that 3/3 Parry does NOT have the extended timer of 2.0 seconds but only the base timer of 1.5 seconds.