Mathking13 Posts: 905 ★★★
September 2019 in Suggestions and Requests
(to any moderators reading this: this is NOT a recommendation for a champ to be added to the game. It's a discussion about a feature I'd like to see added. So please don't merge this into the Champion Wish List thread or anything.)

So I've been reading some Spider-Gwen comics recently. It's pretty awesome to read. And I finished them just yesterday (at the time of writing this post).
And I had a thought (oh gosh he's THINKING what has humanity come to?)
What if we had some synergies cause a change in how the character looks?
Obviously, with my earlier comment on the Spider-Gwen comics, you can probably see where I'm going with this.
Gwenom.
If Spider-Gwen has her Gwenom Rising synergy active, her appearance would become more akin to that of 'Gwenom'. No changes to her animations, necessarily (but that could be done if the developers wanted to...). Just a change in Spider-Gwen's appearance. 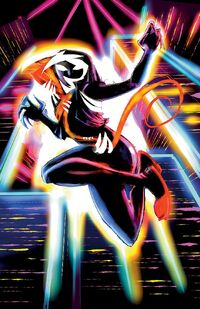 I think this sort of addition to the game would be really cool. And I don't think it'd necessarily be a massive thing to implement; I mean look at what's been done with the synergies between the Fantastic Four. (which is awesome by the way)
Do you think this would be a good addition to the game (lets ignore hardware restrictions or anything; just whether you'd want it or not)? Can you guys think of any other champions and synergies for whom this could be implemented? I'm not exactly that experienced with the comic universe, so I'd love to hear what you guys can think of.
3
Sign In or Register to comment.