What does the MCOC Story Arc difficulty curve look like?

DNA3000 Posts: 12,782 Guardian
May 2020 in General Discussion
With the recent discussions talking about the "difficulty curve" in MCOC, I thought I would take a closer quantitative look at the numbers lurking within the Story Arc content. Now, the true difficulty curve involves many qualitative and subjective things we can't easily put numbers to. How much does difficulty jump when SP3 is turned on? How hard is No Retreat? But I thought it would be useful to quantify what was actually quantifiable, and see where that takes things. At least we could discuss the subjective things within the context of how difficulty unambiguously rises with higher numbers.

I decided to look at the difficulty of the normal minions in the story arc maps, because bosses are hand crafted and particularly difficult to quantify. Also, sometimes their difficulty isn't part of the normal difficulty curve at all, like the Collector or the Champion. They are special cases. I wanted to see how the "normal" difficulty scaled. I also just noted the very first fight on the map, except where it was obviously not representative (for example, those pesky easy fights on 6.1.2).

And then I had to deal with the global buffs. What do you do with +100% champion boost (+100% attack, +100% health). Well, as a very rough estimate one increase in rank increases health and attack by about 35%. Not exactly, but this is a reasonably close average. I converted all global attack and health buffs logarithmically into an effective rank increase. So a 5* rank 2 with a +35% champion boost is "effectively" a rank 3. This increases CR by 10. I then charted my calculated "effective CR" vs story arc map. It is a bit crude and there's some guestimates built into the math, but I think it is close enough for discussion purposes. Here it is: 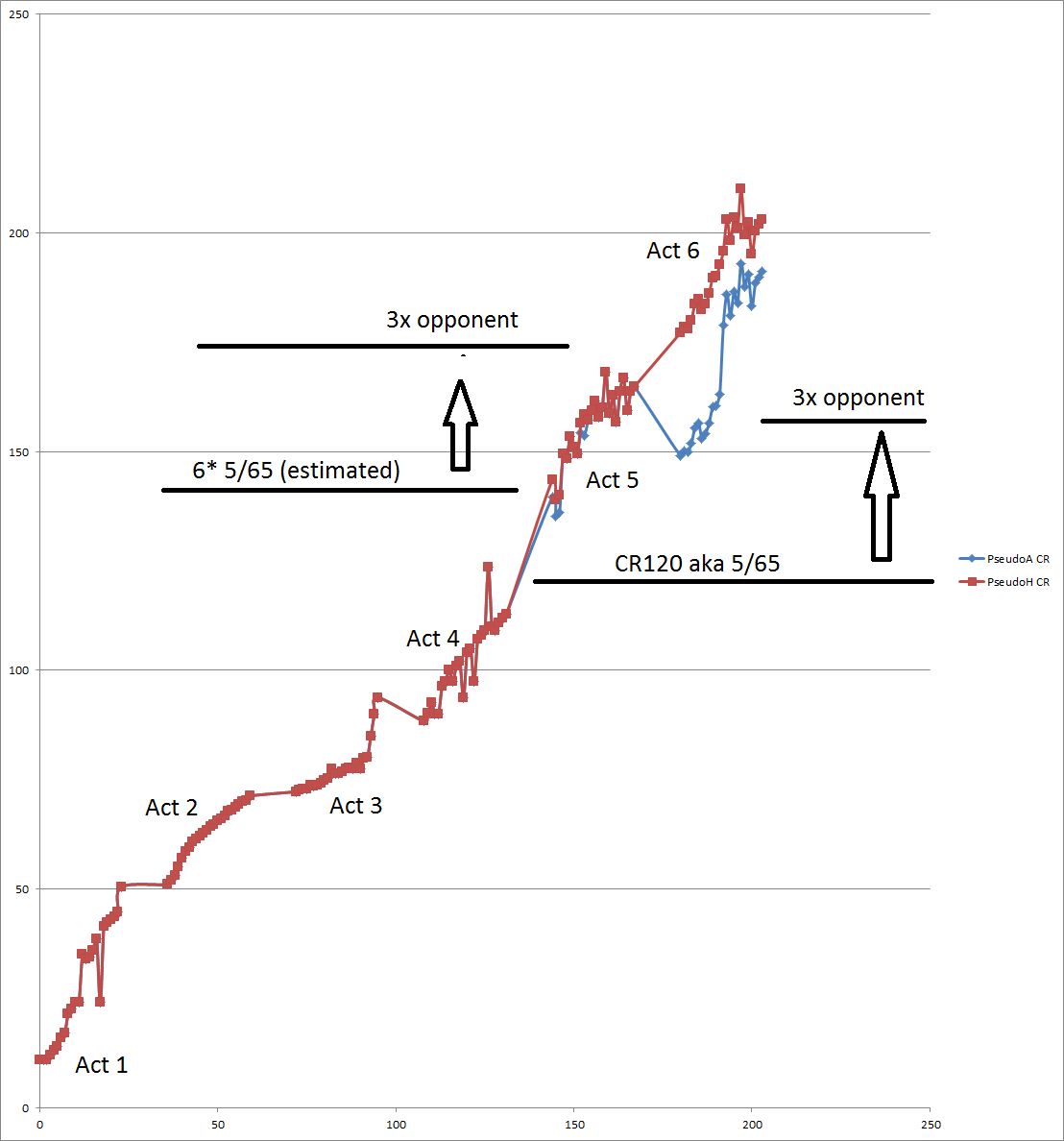 There's a lot to unpack. You can see Acts 1 through 6 labeled. The red line is the approximate effective CR of the minions on the map, factoring in rarity, rank, level, and global buffs. The blue line that diverges from the red graphs the effective CR if you look at attack rating, whereas the red line is effective CR if you look at health. They are identical until you get to Act 5 and especially Act 6 where the global buffs for attack and health wildly diverge.

I've also marked CR120 where a 5* 5/65 would be. The 6* line needs extra explanation. 6* champs do not scale at the same rate as 5* champs past rank 2. They are going up by only half the ratio for rank 3, and presumably higher ranks. Thus, ten points of additional "Real CR" won't equal the same increase in power as it does for 5* champs. I've estimated where a 6* 5/65 is going to be, regardless of its CR, and labeled that (it is lower than what a 6* rank 5's listed CR will be).

Now, normally a good player can defeat opponents significantly stronger than their team. If you bring 10k PI champs into a map you'd expect a good player to defeat an entire map of 10k opponents. In fact, I'm guessing that a good but not spectacular player might be able to clear a map of 30k PI champs, roughly; if the entire map was full of minions with three times higher PI than their team, that would still be doable (I'm not counting other exotic buffs here). So I've labeled where that 3x opponent would be on the chart. Notice that for the average player with good skills who brings an entire team of 5/65 champs into the map, Act 5 would be doable, Act 6 would be problematic.

Amazingly, for this hypothetical player, even if they were to simply wait and let their roster grow before they tackled Act 6, that would still be problematic. The chart suggests that such a player would be able to get throuigh the first two chapters, then get stuck in the last two (when it comes to the opponent's attack rating, which is probably a bigger problem than the opponent's health rating). I'm not even counting the Champion boss here, just the minions on the paths.

None of this counts the difficulty contributions of things like No Retreat or Acid Wash or all of the other tricky nodes. This just looks at the way health and attack scale up in the story arc content. Now, of course I'm not saying Act 6 is impossible. People do it. But the interesting question is who's doing it, and are a lot of players simply never going to be able to do it. The numbers suggest that the average player might never get through Act 6 unless they somehow become far above average players, capable of taking on fights way more than three times higher than their team. They are going to have to increase their skill to the point of taking on minions six times higher, or more.

One more thing. CR is actually an exponential difficulty rating. Since champions are increasing their health and attack by multiples of a ratio (about 1.35) a difficulty curve like the one above that kind of looks vaguely linear is actually massively exponential. Here's that same curve but with CR projected into linear attack and health growth: 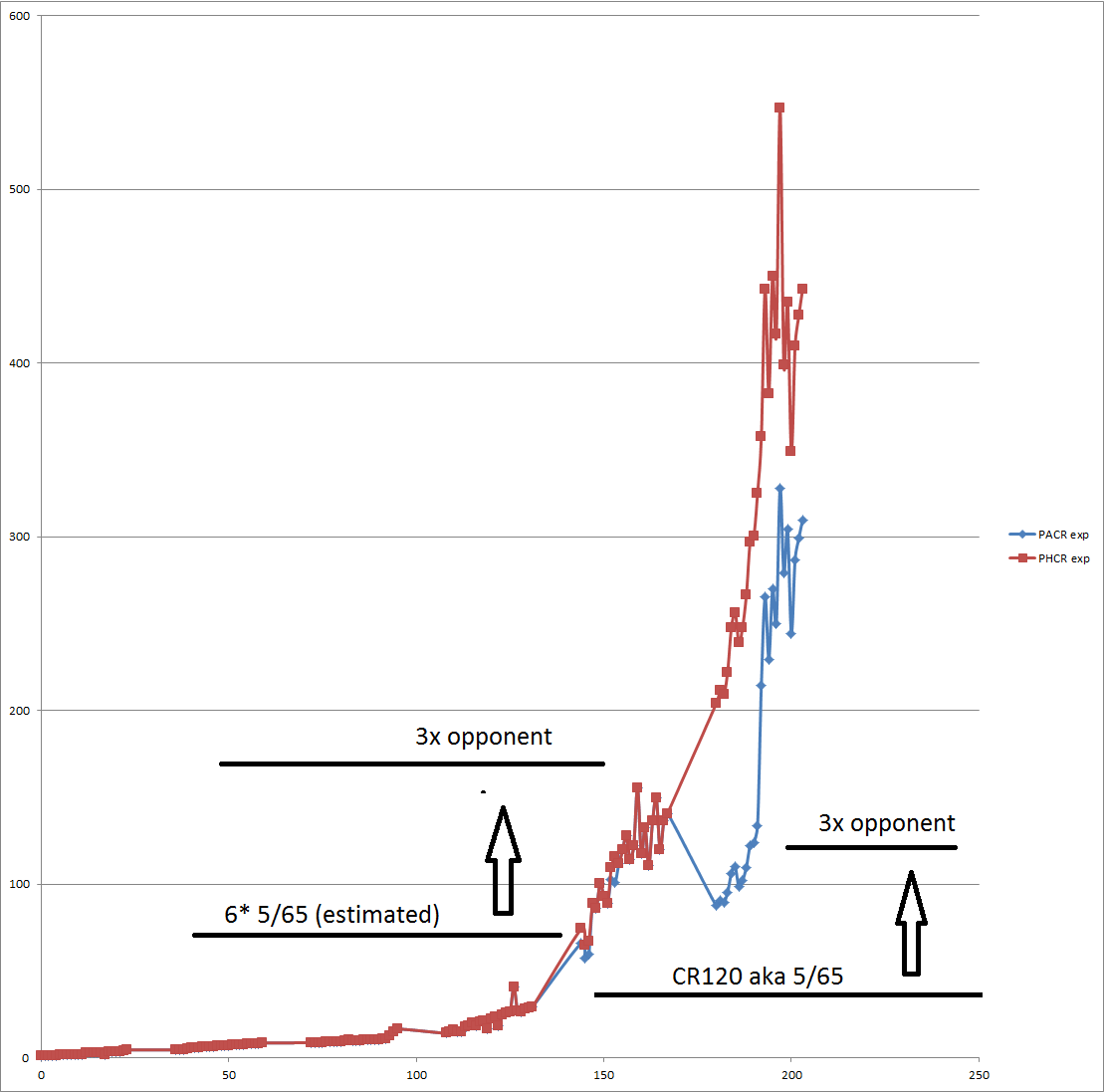 When players notice the sudden jump in difficulty heading into Act 5, that's what they are seeing. Not only are attack and health rising extremely fast, on top of that SP3 gets globally unlocked and you get the Act 5 global nodes and eventually Act 6 nodes. In other words, the real difficulty curve is steeper than this appears. Our rosters are also increasing of course, but not as fast. From Act 1 to Act 4, our rosters are probably outpacing the early part of the exponential curve. I think it barely keeps up with Act 5 if not falls slightly behind. And no one's roster can keep up with Act 6.

Again, people do Act 6. I had no problem doing Act 6.1 pretty much the moment it released. But i have a far larger than average roster and while I'm not a top tier player, my skills are sufficiently above average that I could adjust. But that curve doesn't just make life difficult for average players, it rapidly leaves even significantly above average players behind.

Those marks showing where our rosters are likely to be in the foreseeable future is the important thing, though. Up to Act 5 you could tell a player that if they couldn't do the content they could just wait until their roster caught up. After all, the stronger the roster the less skill you need, and vice versa. I even say that all the time. But when you compare to the difficulty of earlier Acts, even Act 5, Act 6 is already tuned for 8* champs. That's not a typo. Eight star champs are what it would take for the average player to "level into" Act 6. And that's problematic.

And before beta testers started complaining about it, Book 2's attack rating would have been somewhere in the vicinity of 350 on the lower chart. When difficulty is going up exponentially, no human being can keep up forever. It is just a question of how far ahead of the curve they were to start, and how long it takes for the game to overtake them.

Of course, life is more complicated than the simplified calculations I've done. Certainly, the power creep of new champions is a factor, the skill improvements of players is a factor, the knowledge meta of the community is a factor. But none of those things can beat an exponential curve forever, and that's what the numbers suggest to me. Act 6 very likely has exceeded what a very large fraction of players will ever be able to do, even when handed rosters from the future. If Book 2 continues that difficulty curve, regardless of how it does it, even if it does so by means I can't easily quantify any more, it will probably still leave a lot of players behind.
162
«12345»