DNA3000 Posts: 13,813 Guardian
April 2018 in General Discussion
Question: if you want your alliance to get the rewards from a particular bracket, how strong do you realistically have to be?

Based on my analysis of the numbers from season one, I can make a rough estimate. I used the top score for each bracket as the estimate for how many points minimum you need to score to reach the next higher bracket (in other words, to enter Gold 2 you need to outscore the highest score in Gold 3). I then guestimated a reasonable strong performance points before multiplier of about 165k (which is 140k plus 25k bonus for winning half the time) and presumed 24 wars in eight weeks with full battlegroups every time. I then divided to get the multiplier you would need to reach the point total, and then used that to determine the war tier you would need to be to have that multiplier or higher.

Here's the basics: each reward bracket, the highest score from the bracket below (i.e. the estimate for the lowest possible score to be in that bracket), the average multiplier you likely have to possess to achieve that score, and the tier you need to be in to have at least that multiplier. 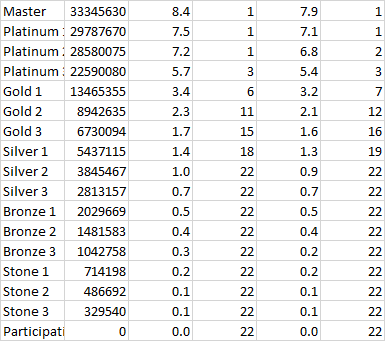 The first set of numbers presumes 165k per AW on average (this assumes 50% win rate) and the second set presumes 175k per AW on average. I included the first set of numbers because I thought it best represented a reasonably point average for relatively competent alliances, but I included the 175k numbers because the calculations showed that at the very top that assumption was slightly too low: you couldn't enter the master bracket with 170k average even with a consistent 8.0 multiplier: those alliances had to sustain something closer to 175k per war at a minimum.

A couple of observations. First, if you're not in tier 3, you're unlikely to be able to reach the Platinum brackets. In fact, there was a suggestion a while ago to increase the tier 4 multiplier from 4.5 to 5.0. My calculations suggest that increase would not be enough to allow tier 4 alliances to enter the Platinum bracket without extraordinary scoring. Second, most of the competition is in the Gold bracket. Out of all the alliances that consistently fight wars and can score about 140k per war not counting the war bonus almost the top 50% will likely end up in Gold 3 or higher. Most of the rest will end up in Silver. Stone and lower are mainly alliances not consistently competing or only competing with one or two battlegroups at very low tiers.

First place required extremely strong play. Assuming 24 wars the top alliance averaged 194,516 points per war including the win bonus at the maximum multiplier. For the record, the highest possible point total in a war in which the other side clears all of your defenders is 149,100 points. The highest possible point total in a war where your opponent does literally nothing is 186,600 points. I doubt that they won every single war while scoring about 144k points, which suggests the much more frightening alternative that quite a lot of the time their (top tier) opponents were unable to even come close to clearing their defenders.

Season two numbers will almost certainly be at least a little different (and probably higher), but these are rough estimates anyway and will probably still be in the general ballpark assuming no major structural changes to alliance war prior to season two. And consistently scoring 140k points in every war is definitely above average play: I picked that number not because it was average, but rather to calculate the minimum rating multipler required for very strong (but not fantastical) play. For alliances that average fewer points per war, the minimum rating required will be higher.