DNA3000 Posts: 15,111 Guardian
July 9 in General Discussion
Over the July 4 weekend I became a Parallelogram, and as a result I stopped receiving Thronebreaker daily crystals. My last one was on July 1. These are my final totals and measured drop frequencies for that crystal. 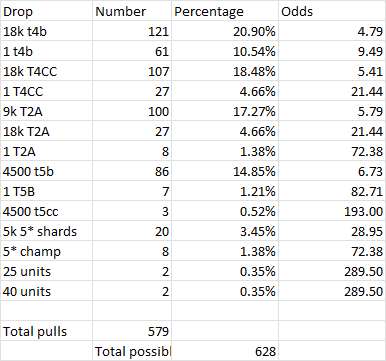 I was a Thronebreaker for 638 days. I did not record the first ten openings (thus, 628 above). I actually opened and recorded 579 daily crystals. The rest were lost to clock drift over time. So I managed to open 92% of all possible daily crystals, without doing anything crazy like set an alarm or something. As far as I'm aware, I received at least one of every possible drop except for the 10k 6* shard drop. I never received that one (and now never will).

In terms of measured averages, this is about how much stuff I received from those crystals per 30 day month (assuming I actually opened 30 crystals in that month): 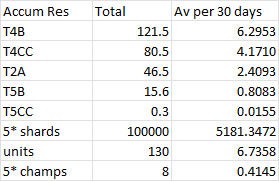 Not bad. Of course, the Parachute crystals are better, and I've started collecting data from those right from the start. But it will be months before I have any useful data from those.

Also, a strange anomaly. Within the first two months I received three T5CC fragment drops. And then never again. Odd.

So far, the Palpatine drops are looking pretty good. T2A twice, half a T2A, one T4CC skill catalyst, and half a T5B. We'll see if my luck pulling the rarer drops improves this time around.
28