Colonaut123 Posts: 3,091 ★★★★★
February 2019 in General Discussion
So, I was just watching Seatin's beta breakdown of Spider-Gwen when I noticed a possible HUGE issue.

So, according to the beta, this is the description of Spider-Gwen's Spider-Sense ability: 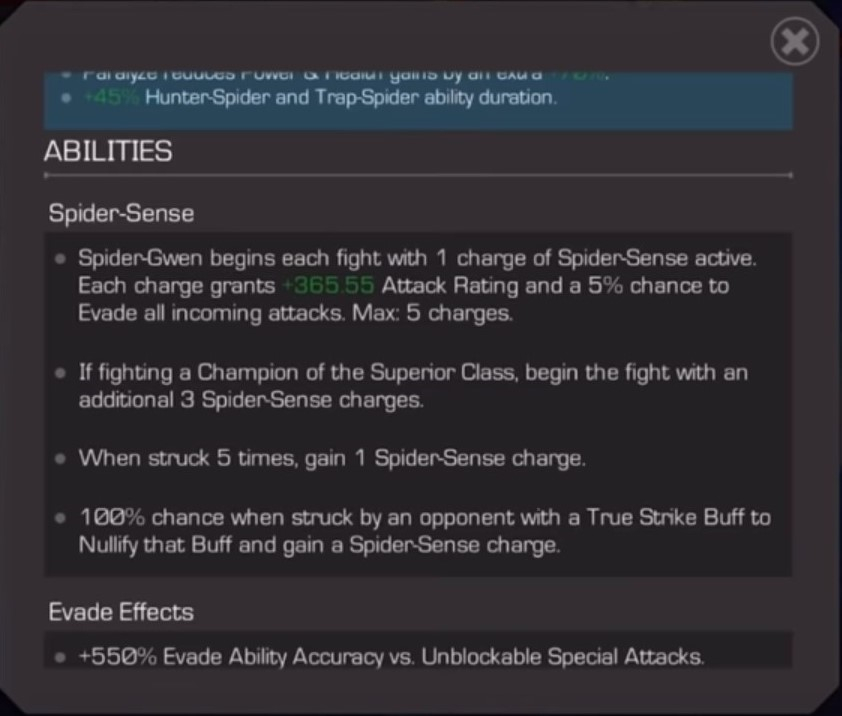 The last bit is annoying, as it means that as an evade champion she can counter the counter-evade champions. That maybe makes her a bit OP as that means she basically has an unavoidable evade. The only two champions that can counter that, on top of my head, are Venom (because his ability relies on his Genetic Mutation buff, not his True Strike when below 18% health) and Proxima Midnight (as she has a True Accuracy, not a True Strike buff like her lover Corvus).

But that's not the biggest issue. The biggest issue is that it is regardless of the opponent's class. Corvus can't cheat her evade? Fine, but Skill champions like Killmonger should. That's the freakin' point of Skill champions having those True Strike buffs: to counter the evade-heavy Science class. But here we have a science champion who can 'cheat' the class system. It is gamebreaking.

But wait, this isn't the first science champion who does that. Isn't Luke Cage bleed immune? Doesn't Abomination poison when bled? What's the difference with Spider-Gwen? Well: the former two 'cheat' the class system because that makes sense comics-wise. Spider-Gwen's 'cheat' is purely mechanical and if there is a mechanical issue with it, it should be fixed.

I hope Kabam can change this before the reworks go live in March.