DNA3000 Posts: 12,219 Guardian
June 2019 in General Discussion
Whenever the devs make changes to content or introduce new content, the question of what an interesting challenge comes up. Some things are considered reasonable, and some things are considered "cheats" or "money grabs." And opinions vary: no two people will agree in all respects. What one calls reasonable another will call cash grab.

In thinking about this, I happened to encounter these two node buff combinations while playing: 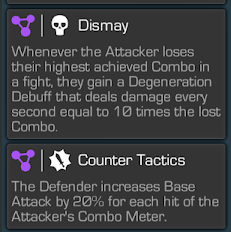 What I find interesting about these two node combinations is that the first one is at least in theory completely counterable by any champion. All you have to do is not get hit, or take too many blocked hits. Like, ever. Meanwhile the second one contains one of the less-loved defensive buffs in Spiked Armor, and this node combination affects different champions in different ways. And yet, I find the second set much more interesting and fun to play around. In fact, it is the very things that might make it bad on paper that make it interesting in practice. It does have a very annoying defensive buff in spiked armor. But it is that very fact that makes it very rewarding to work around it by using the other defensive buff to my own advantage: Dulled, which eliminates my critical chance and thus the chance I will trigger Spiked Armor.

The first pair seems uninteresting to me because it is all punishment and no reward. There's absolutely no thinking or strategy involved. Just don't get hit. "Don't get hit" is not a tactical choice: that is what we try to do all the time. You just get punished for failing to do it perfectly. Conversely, if you do avoid getting hit perfectly the node will start to punish you for that by making the defender hit harder and harder over time, including through your block eventually. So the node combination punishes you for getting hit, and also punishes you for avoiding getting hit for too long. The primary way to escape that node combination is to end the fight as quickly as possible by bringing champs that simply deal as much damage as possible. I know that is an oversimplification, but that's the core of the issue.

How do you make the first combination more difficult. Well, we know how Kabam does that already: add Mesmerize. I'm not saying that doesn't have counters, but I'm saying it seems to me that countering Mesmerize/Dismay is a lot less interesting and fun than countering Spiked/Dulled.

For me, the lesson encapsulated in these two examples is that what makes a challenge interesting is not whether the node combinations are "easy" or "hard" but rather if they've been designed to offer non-trivial tactical options. Dismay/Countertactics has a counter, but the counter isn't a tactical option: not getting hit and ending the fight as fast as possible is not a tactical option. That's simply always the goal.

Also, every challenge must have a reward, and I'm not talking about crystals and gold. I don't "feel" rewarded for getting past Dismay/Counter. I just feel relieved I ended that as quick as possible. I do "feel" rewarded for getting past Spiked/Dulled. I feel like I got away with something. And I know Spiked Armor is not an especially hard node to get past regardless, but it still feels like I "cheated the game" by getting past that node with basically near-full health. Because there's still the rest of the map to complete: that's not the only fight I have to deal with.

I'm not saying Spiked/Dulled is the perfect defensive node combination. I'm saying that somewhere in there is what I believe the devs should be striving to aim for, in monthly quests, in AQ, and perhaps especially in AW. Consider how difficulty in AW would be judged if something like Spiked/Dulled existed on AW maps and Spiked was local but Dulled was a link. Does that change how the map gets run, how lanes get coordinated, etc? Suppose one alliance found an especially awful defender to place on a node, but the attackers could counter that placement with unconventional tactics like deliberately leaving a link up.

The game should reward tactical thinking at least as much as it does twitch skills. I think Dismay/Counter isn't bad: it rewards twitch skills. But it does so in a less interesting way that is difficult to tweak for higher difficulty, and it encourages something that needs no encouragement: bringing super-high burst damage dealers. Spiked/Dulled is perhaps a bit simplistic and easy to get around, but it perhaps offers the blueprint for how to scale that up to higher and more rewarding difficulty.
33