An Alternative perspective on Invisible Woman

Magrailothos Posts: 3,991 ★★★★★
June 2020 in General Discussion
Thought I'd finish writing and post this during never-ending maintenance!

I was lucky enough to pull Invisible Woman from a recent 6* crystal; and a little research made it pretty clear that she's considered almost good, but needing a very high skill, for only modestly high reward. A lot like Star Lord, she needs a very specific and careful playstyle to ramp up her damage; and a single mistake puts her back to square one. This makes her far less desirable than alternative high-damage champs like Ghost, Corvus's, etc. Only ideal for really, really skilled players; most of whom would have better options.

After playing around with her for a while I've decided that this opinion of her is just plain wrong. Or at the very least, short-sighted.

Whilst she does have some drawbacks, and she really does have the capability to reward very skilled play (check out MCOC Daniel's video below), she's actually a surprisingly forgiving and versatile champion to use - even for beginners, or someone (like me) with a modest skill level, at best.

Forgiving and versatile enough for me to take her into LOL (easy path) at 1/25, and for her to be incredibly valuable there.

One of the reasons you might have thought IW was a bad choice for LOL is the Mark of the Labyrinth; which grants the defenders a 10% Evade chance. Surely that would render her useless?

Far from it. Invisibility proved to be a splendid defence; allowing me to recover from any Evades my opponent made, and quickly regain control of the fight without taking a single hit. Sure I lost a bit of my damage output periodically. But I didn't get annihilated! And, heck, I'm not that skilled, and was never expecting to make it to fifty Dodges without making a mistake anyway!...

As an (at best) average player, playing with Invisible Woman is actually surprisingly rewarding. As soon as she's invisible she gets a huge Critical Rate boost, so the big yellow numbers start coming a lot faster. The Energy damage as a follow-up is a nice extra bonus (and it's what provides the payoff for the really skilled player); but the actual Crits alone make a major difference to her damage output. Enough difference not to really miss those little red numbers if you finally mess up and block a hit or get tagged as you dash back. Just play defensively, wait out the ten seconds cooldown, and start again.

So she can help you cope with Evade champs (as long as they aren't evading too frequently). Where else does Invisibility act as a safety net for the low to average player? Failed intercepts. Mis-timed dashbacks. Opponents with tricky-to Evade or Unblockable Specials (Dr Doom, for example). In fact, you could argue that it does more for the low-skilled player than the high-skilled player.

Do you hate Mesmerise nodes? Well, Invisible Woman takes them in her stride. Get evaded; and you'll stand (stunned) as your opponent flails helplessly at the air, never once landing a blow (and building up your force-field whilst they do, if she's Awakened!).

Struggle with Oscillate? Dodge your crazily aggressive opponent, then whilst they're blocking you can batter them down, because you've reduced their block proficiency to zero with your Vulnerability debuffs.

Opponent with strong Power Gain effects? Block their hits to Exhaust them, instead of working on Invisibility.

My recommendation for the community: don't give up on Invisible Woman; and certainly don't tell 'beginner' players not to use her. Sure she could be better (suggestions here!), but I think she's potentially great for beginning players, as she's actually a champion with built-in training wheels, who encourages you to develop vital skills like dodging and intercepting. She doesn't really need Awakened, and has the potential to reward ever-increasing skill with ever-increasing damage. That sounds like a pretty decent champion design to me! Add thoughts below!

A couple of CCP videos below: 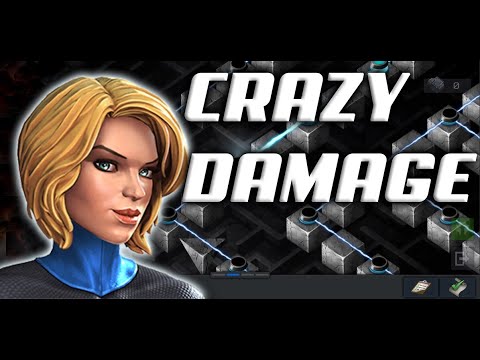 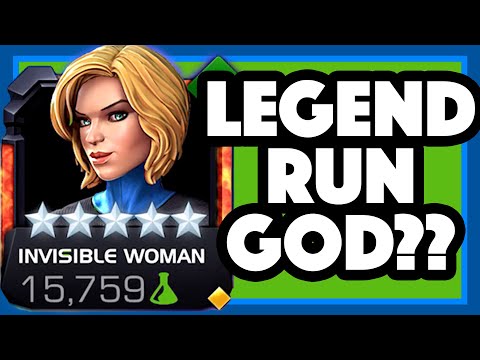