Shaanenegan Posts: 93 ★
October 16 edited October 16 in Suggestions and Requests
So today I was just chatting when asbestos man came up in the conversation & I think that is needed in the game. I took the liberty of creating his abilities.
------—


POISON
Asbestos Man has a 30% chance to poison the Opponent with his basic attacks and 100% with Heavy hit.
These poison Debuffs deal 1333 damage over 12 seconds. Max Stacks :5
Poison reduces health gain by 30% while it's active.

The chance to apply poison decreases by 3% per stack of poison on the opponent. Max reduction: 6%

If Asbestos Man is poisoned, he takes 0 damage for the duration of the poison & gains 3% of missing power per second until he reaches 2 bars of power. After filling two bars of power, he gains a inactive regen gaining 1% of missing health per debuff on the opponent or himself after activating his next special attack. Max heal :5% of missing health.


WHEN ATTACKED
10% chance to poison the Opponent for 666 damage over 2 seconds. This chance & its duration increases by a flat 10% for each poison on either Champion. Max : 30% & 2.4seconds.

SPECIAL 1:
Asbestos Man places 5 poison debuffs during this attack dealing 67 damage over 25 seconds. This debuffs do not count towards the max poison stacks. If the opponent is immune to poison, The poisons are instead applied to Asbestos Man.
SPECIAL 2:
40% chance to Stun for 1 seconds.
This chance is increased by 5% for each poison debuff on either champion. 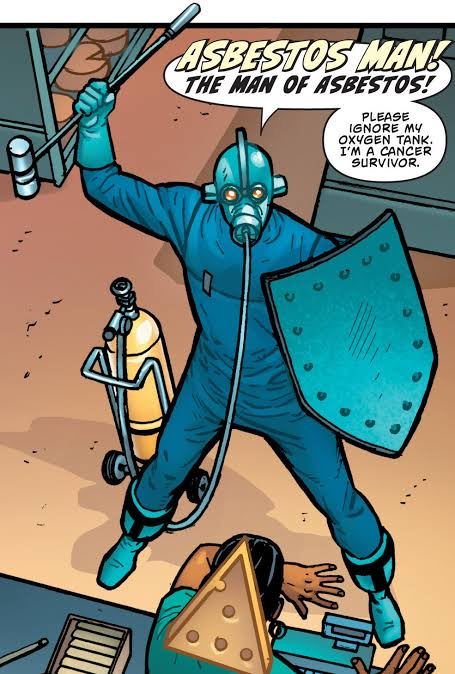