My guesses for the champion puzzle 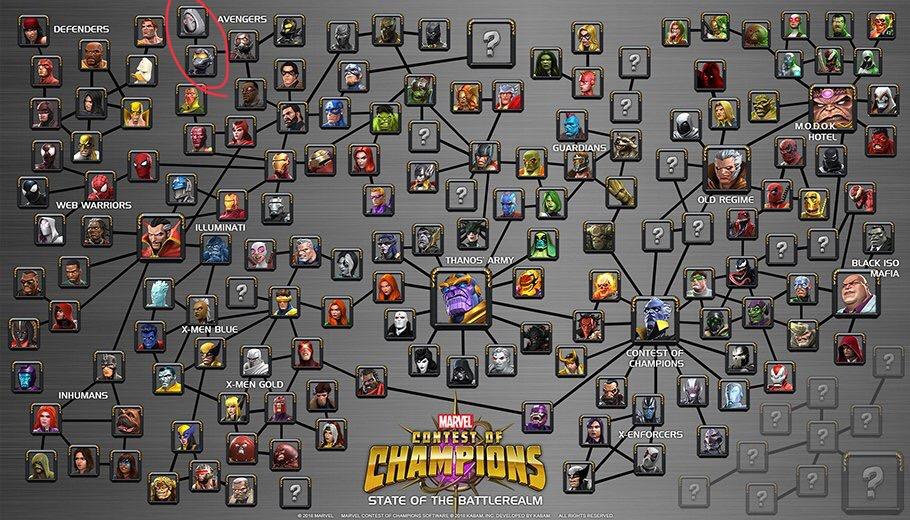 So for anybody that doesn’t know, this is a photo Kabam uploaded on Twtter (?) awhile ago. This has all of the champions currently in the game, and some characters yet to be revealed. The character placement is based on relationships between characters. So here are my guesses for who the remaining champions are:
There are two champions who are only connected to Venom and Carnage, so it’s safe to assume that those will be Symbiote champs, probably added in October. There are a lot of possibilities, but I think that the most likely characters are Anti Venom and Mania.
There’s a champion only connected to Cap. America, which is practically screaming Red Skull.
There are two characters connected to each other and nobody else. I’m guessing Cloak and Dagger, possibly for next months event quest.
There’s a champion that’s only connected to RagnaThor and RagnaHulk. That’s probably Korg.
There’s a champ only connected to RagnaThor. Probably Valkyrie.
There’s a champ that’s only connected to 90s Cyclops. I think it’s probably Emma Frost, but I can also see it being Havok.
There’s a champ that isn’t connected to anyone, but is near the X-men. There are a lot of possibilities. I think that Quicksilver and Mystique make the most sense. I can also see it being Cyrottak (NPC) since it’s near Juggernaut.
The entire bottom right corner is separate from the rest of the puzzle. I think it’s gonna be the Fantastic Four, Dr. Doom, Galactus (NPC), Silver Surfer, Terrax, Fire Lord, Star Dust, and Air Walker.
I don’t know who the champs between the Collector and the Grandmaster are, so I’m gonna guess that they’re going to be some of the more powerful characters in the comics, like Nova and Gladiator.
2