Ultron has digitized the Battlerealm, creating a twisted version of The Contest in which the only victor is himself! It’s up to you to enter Ultron’s world, hack the very rules of The Contest of Champions, and empower your Champions to face the ever-increasing difficulty of challenges!

This evolution of the co-op mode previously known as Dungeons is now going live on April 8th!

While we had previously intended to and messaged that Incursions will start April 20th, we understand that this social mode would provide Summoners with more to do, and a way to connect and play with friends and family around the world!

Incursions are a Co-op Game Mode where 2 Summoners play together to accomplish a single goal, defeat the boss, and move to the next Zone! You will pair up, select your team, and face off against Zones of randomly generated Enemies and Buffs whose difficulty will increase infinitely! That sounds a lot like Dungeons, doesn’t it? Well, a lot has changed!

In summary, you can look forward to these changes, but read on for more information on each of these!

Choice Nodes give you more agency: Item Limits per Zone provide more of a Challenge - 5 Items per Zone
5 Day Timers per Event, instead of 3 Days!
No More Room Timers! Start an Incursion and you’ll have until the event ends to finish your run!
More Variety of Encounters: A Permanent Game Mode:

In Incursions, your goal is to make your way through Zones, severing Linked Nodes, acquiring Hacks (buffs) that empower your Champions, and switching your roster on the go to make the most of your Hacks. 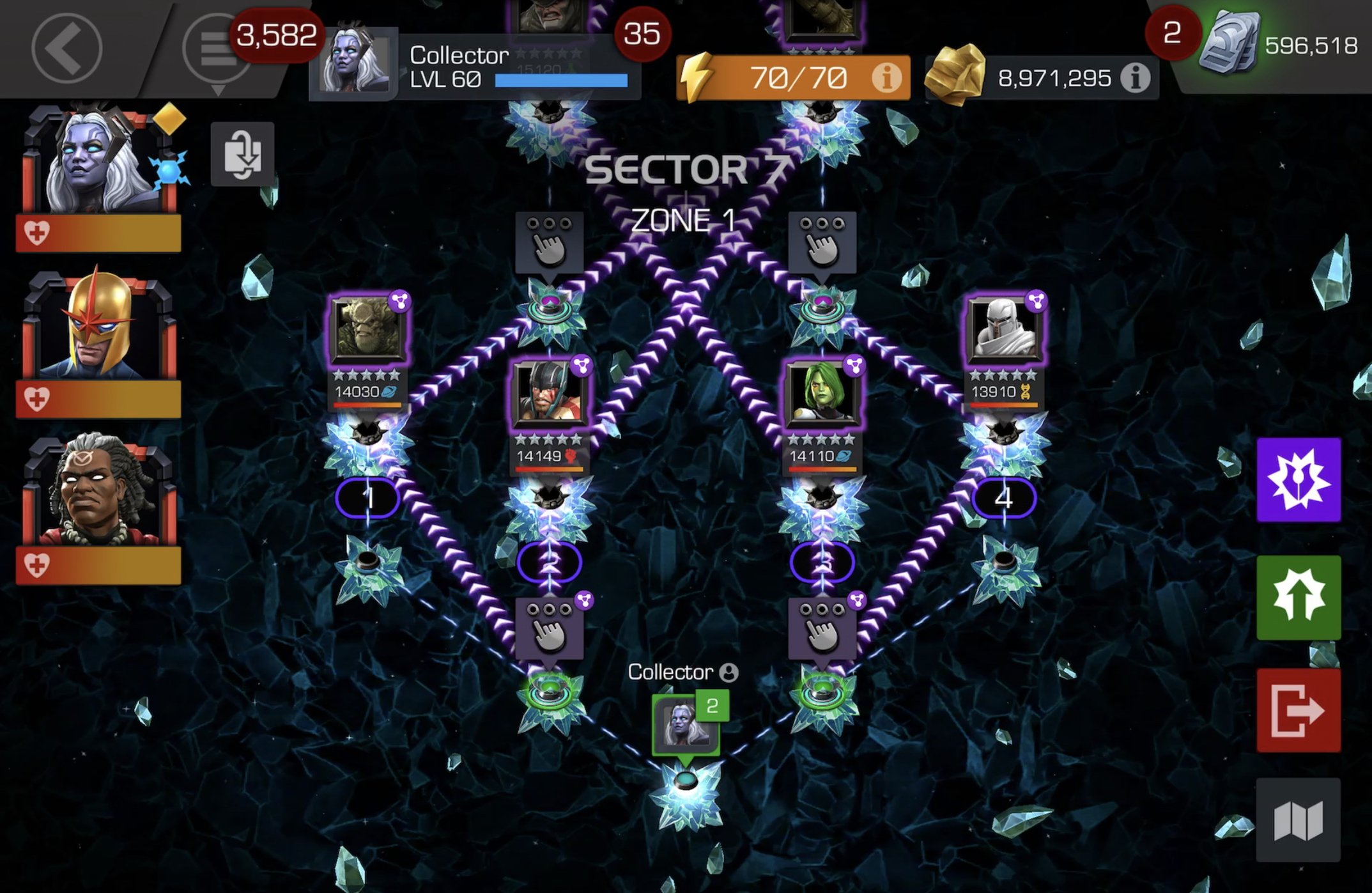 When you start an Incursion, the first thing you will see is a new map. There are still 2 sides, and you’ll still be taking down Linked nodes to help your partner, but now, you’ll be faced with a lot more choices. 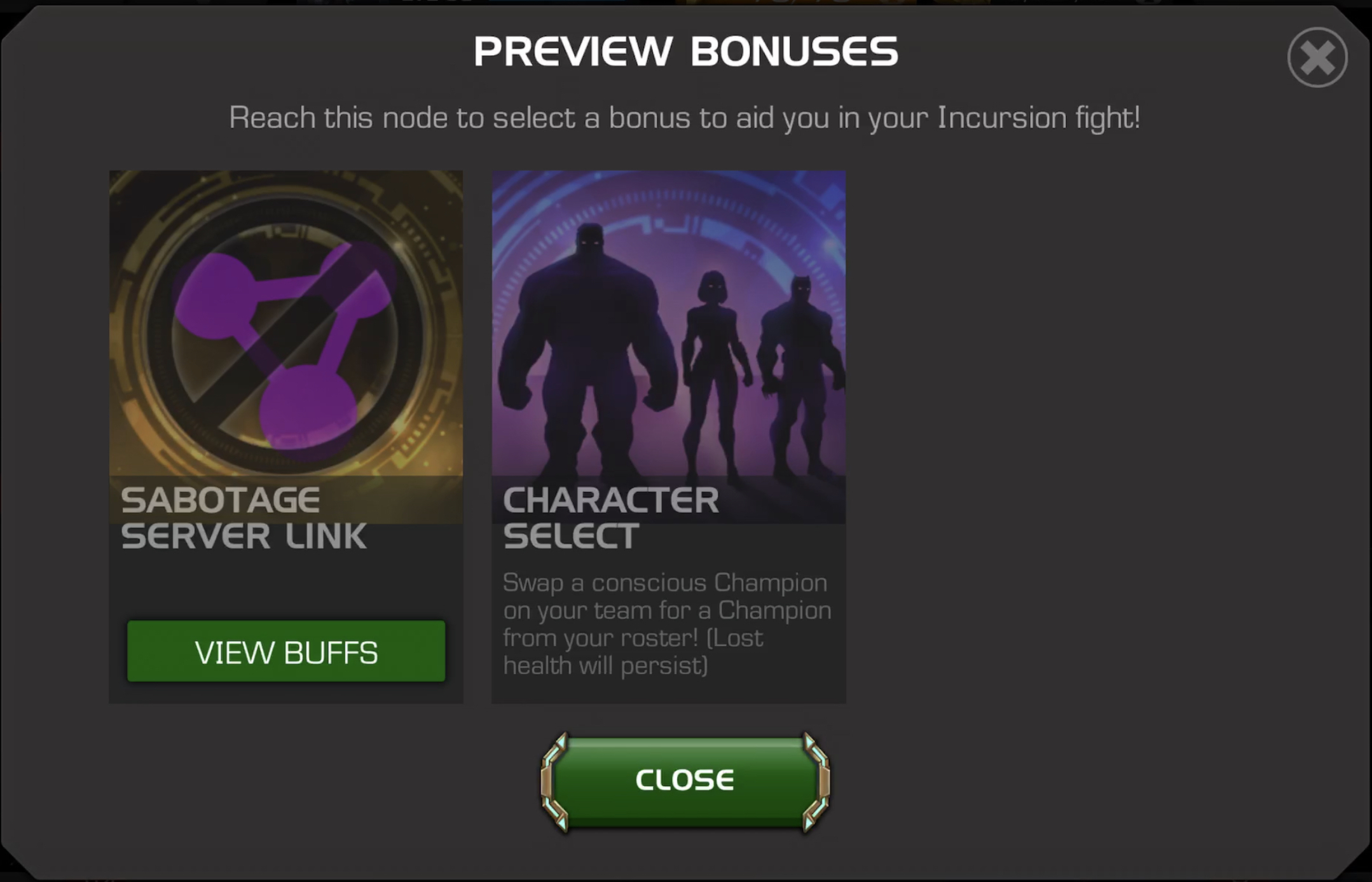 Next, you’ll take on a Champion that provides a Linked Buff (as the Zone number increases, the numbers of Buffs on each node will increase too) to an opponent on your Partner’s side of the Map. Remember to ask them which Buff they’d prefer you remove, and to tell them which to remove too!

After you’ve defeated that Champion, you’ll get to choose your first Common Hack! Common Hacks are Buffs that last for 3 Zones and apply to all of your Champions, even those you swap in after activating the Hack! 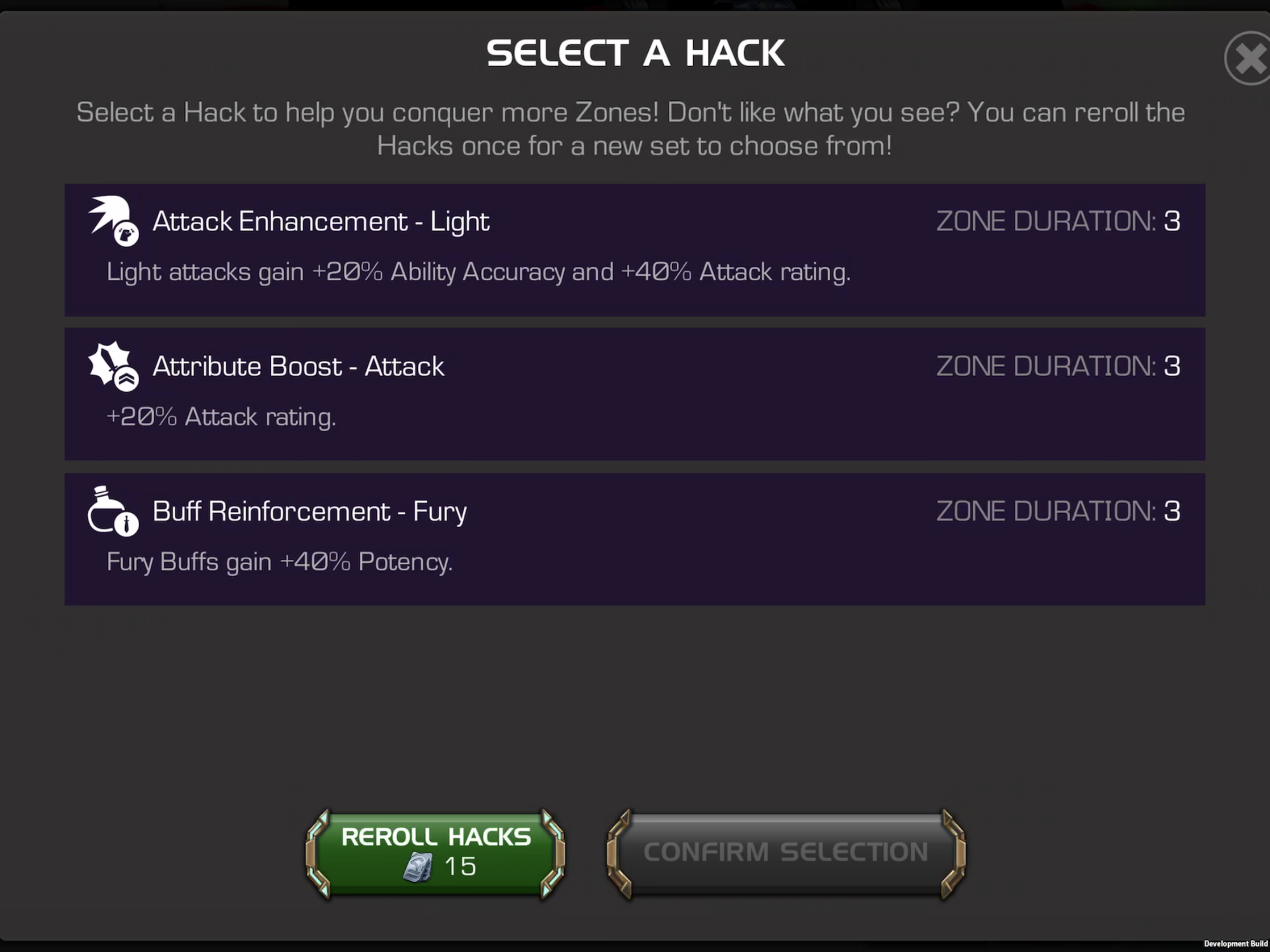 Next, it’s time to take down your next encounter! After you’ve taken on this next Challenge, you’ll get to choose another Common Hack that will prepare you to take on the Boss!

The Boss will now have one or more Local Nodes and no longer Degenerates if both link nodes have been taken down, and your Champions will no longer regenerate when striking them.

Need the health? There’s another Choice Node coming that can help! 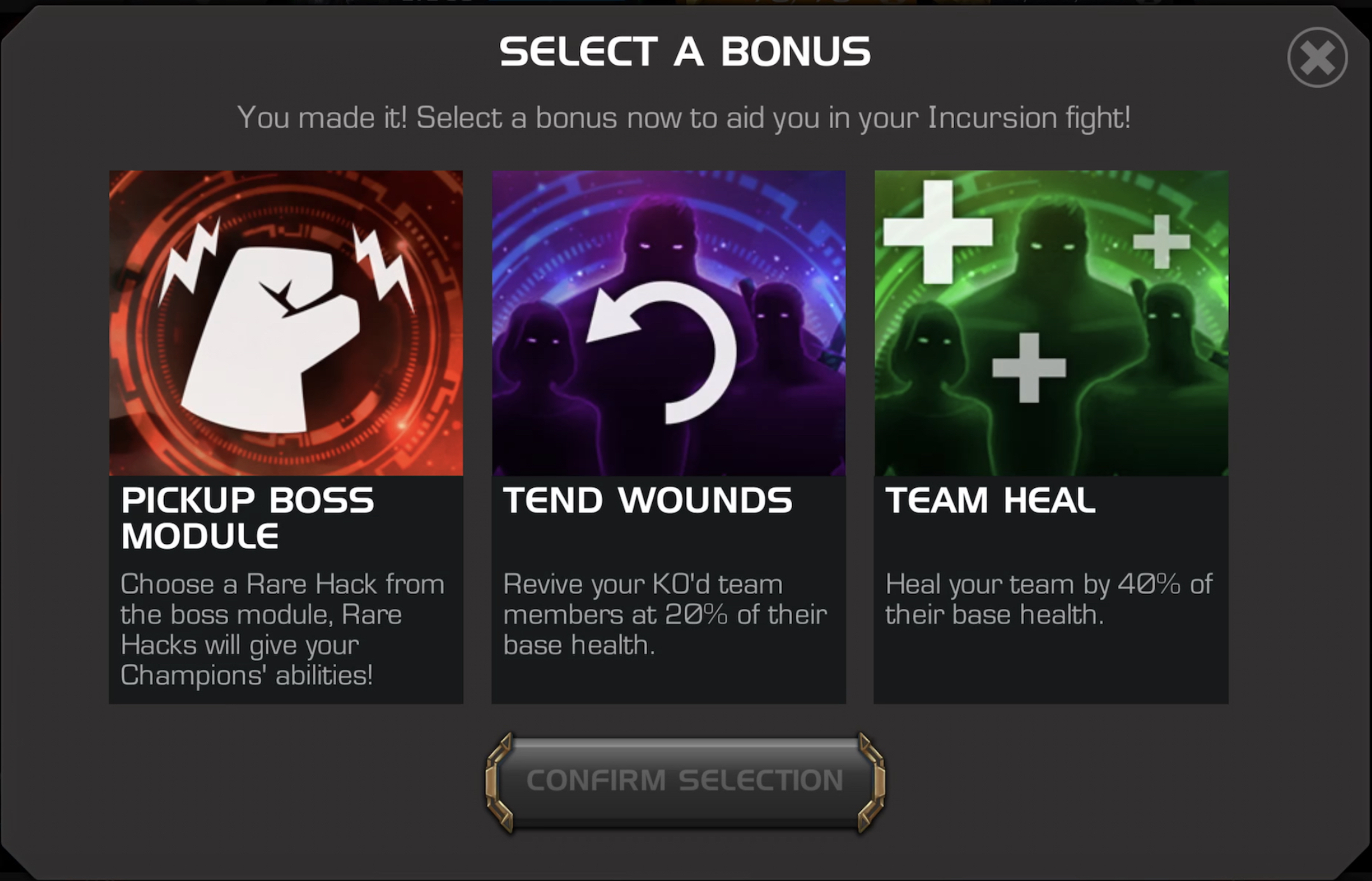 Boss Modules provide you with powerful Rare Hacks! Rare Hacks also last for 3 Zones (plus the 1 that you will complete right after leaving this node) and will give your Champions Abilities that they didn’t have access to before! 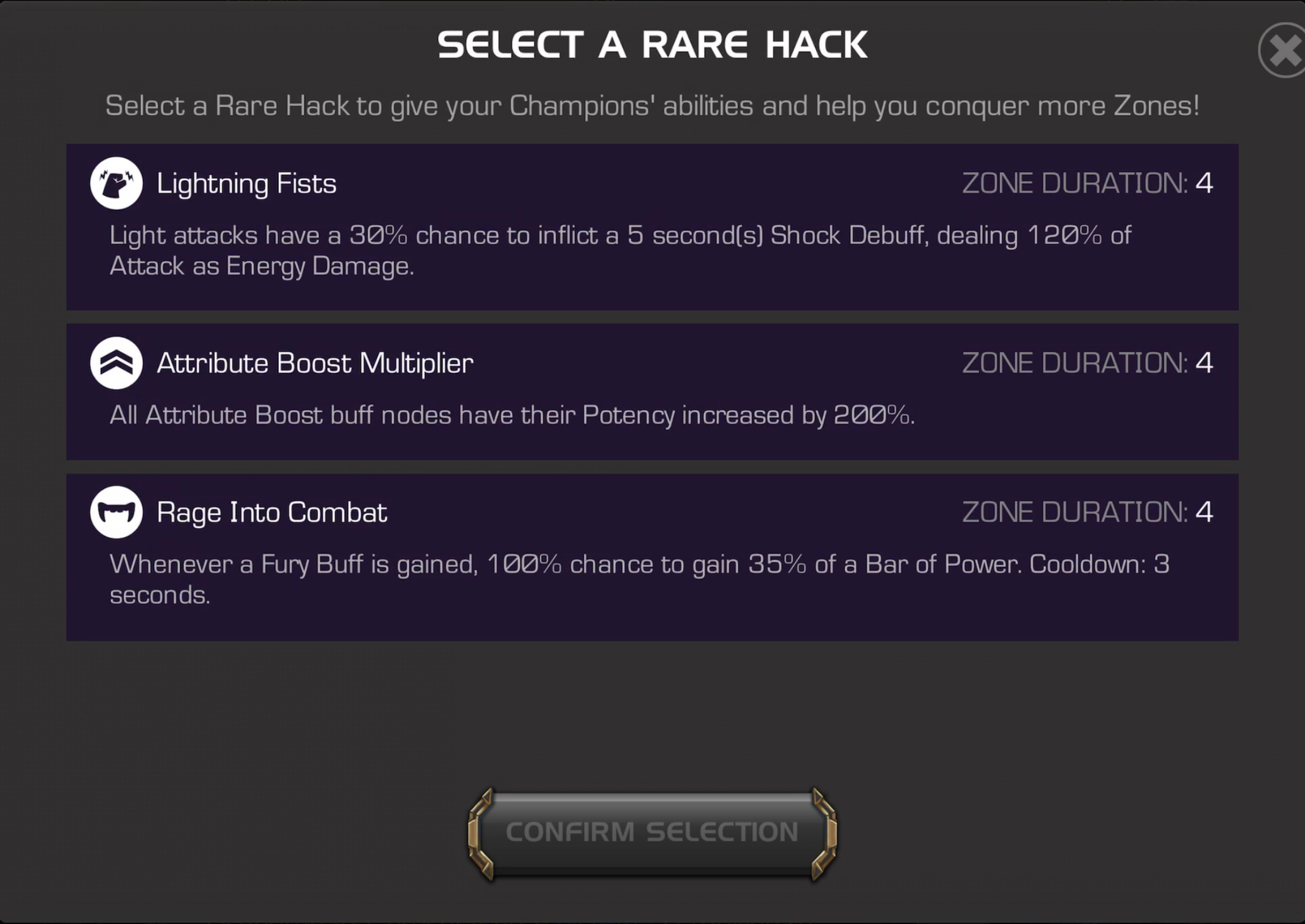 These Rare Modules open up a world of insane Buff combinations and power for your Champions! From adding new Buffs to your Champions Abilities to providing an additional Debuff for every Debuff your Champion places, there’s no limit to the incredible combinations you can encounter.

Remember, once you enter the next Zone, your first choice will allow you to change Champions on your team. If you have another Champion in your Roster that might benefit from the Common and Rare hacks you’ve gained, you can switch them in then! 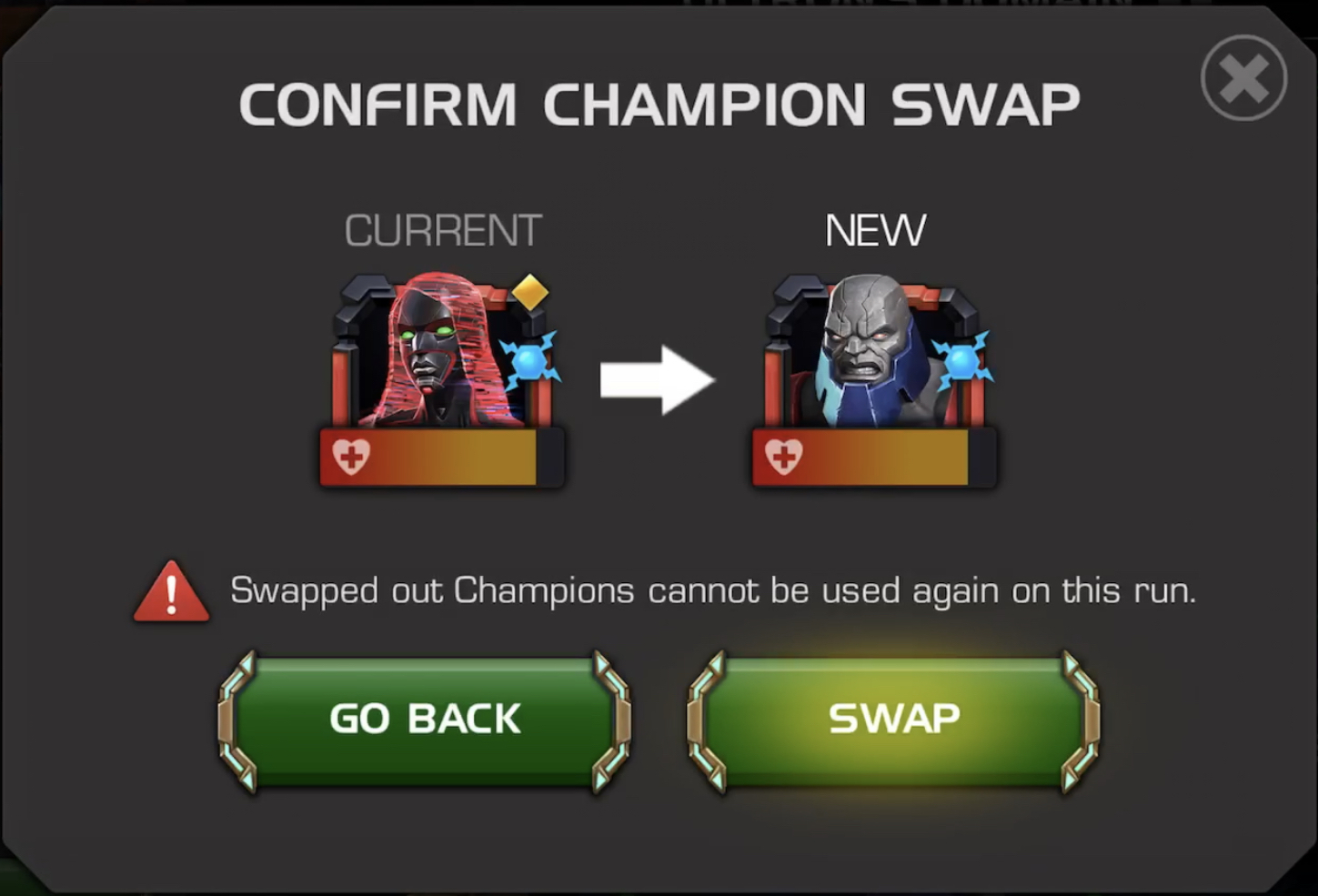 If you’re having trouble keeping track of your Hacks, or just want to see the Hacks that your partner has chosen, you can select the new Purple Hacks button to the right of the screen. Here you can see all of the Hacks you and your partner have activated. 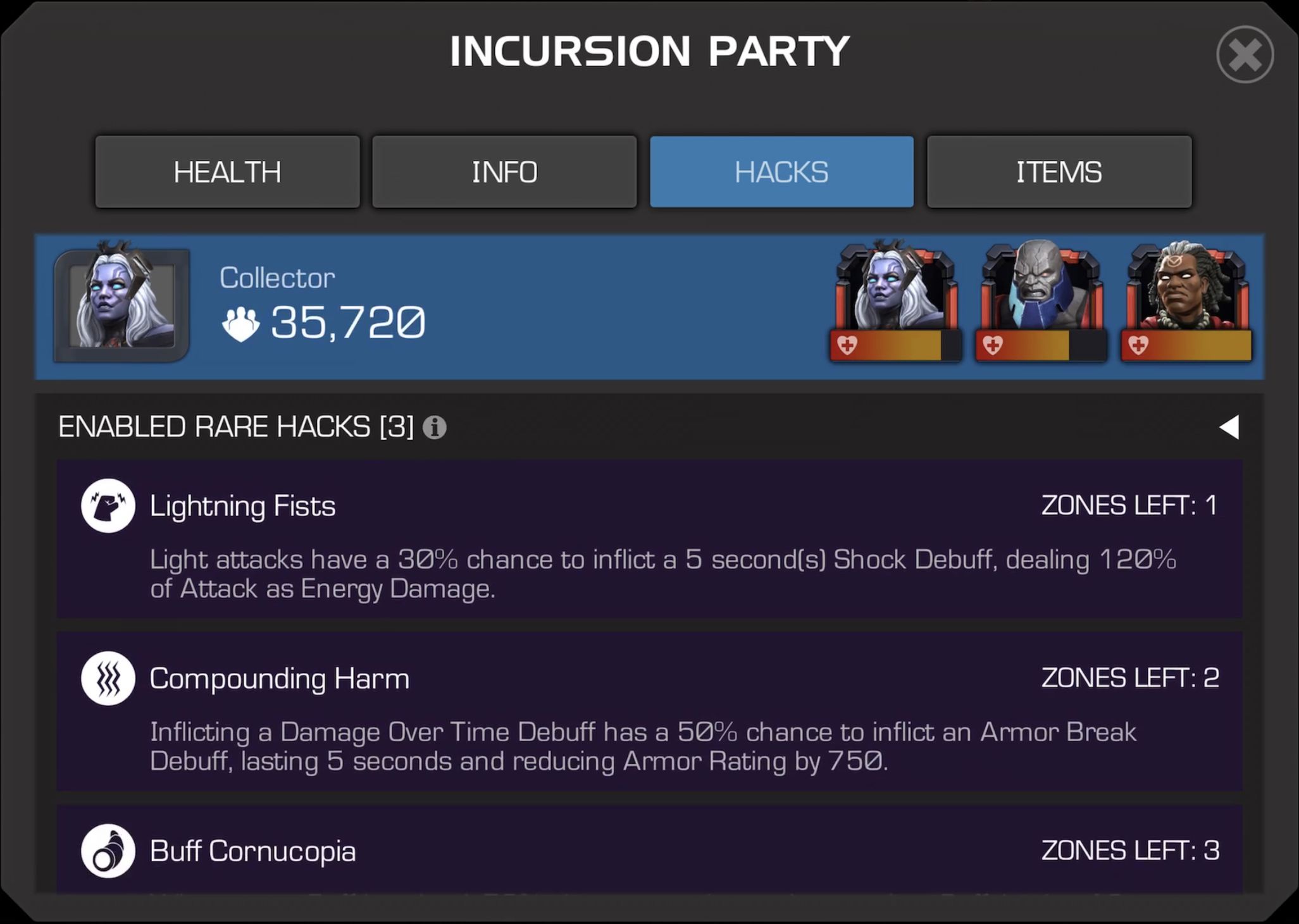 When you finish the Room, you choose to move on or end your Incursions run. The difference now is that you will no longer lose out on points for leaving an Incursion Mid-Zone. What you’ve achieved will always be rewarded regardless of if you fail in the next Zone!

Now that you know the basics, your goal is to empower your Champions with the most complimentary Hacks that you can gather, and break Ultron’s digitized version of the Contest!

Ready when you are

With the introduction of Incursions, the game mode will now be available all month long, and events will now go for 5 days at a time, instead of 3, and will no longer be based on classes.

Using your Champions in an Incursion does not lock them out of any other game mode.

The goal of Incursions is to explore as many Zones as possible, and we want to encourage Summoners to push further than they ever have before!

Rewards are now available for Milestones (which reset every 5 days), and Top Zone rewards, which will reset every 30 days.

Milestones are achieved by earning points from completing a Zone.

You now get your points when you complete a room, and no longer have to conclude your Incursions run to get points! No more choosing between playing it safe and ending a run, or risking a harder Incursion for more points!

Top Zone rewards can only be earned once per month, and are awarded upon reaching the highest Zone you can for the first time that month. They are automatically claimed when you finish a Zone.

Every Summoner will qualify for 2 Sectors in which they can earn Top Zone Rewards, based on their Incursions Tier (read on for details about eligibility).

Friendship and Matchmaking Bonuses are still present, and remain unchanged.

Formerly called Dungeons 1-7, Sectors represent your difficulty level (Sector 1 being the lowest, Sector 7 being the highest). Every Summoner will have a choice of 2 Sectors available to them that will help them earn Top Zone Rewards.

Where do you fit? Find out below:

If you want to join a friend on a lower Sector than your prescribed Sectors, you will be able to earn points towards Incursions Milestones, but not Top Zone Rewards.

If you already have Incursions/Dungeons Potions or Revives in your inventory, don’t worry! They’ll be updated as well.

Save the Digital World

Incursions start on April 8th! Find a friend or Alliance Mate, and get ready to hack the Contest!

There’s lots to learn about Incursions. Keep an eye out between now and the start of Incursions for videos and other content by your favourite Marvel Contest of Champions Content Creators!

Want even more insight into Incursions? Check out this Video starring our producer, Tyler, and Dorky Diggedy Dave! 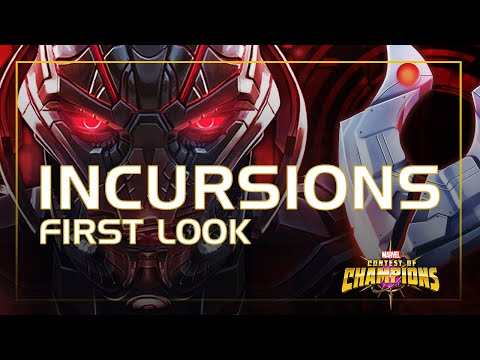