TUG_TheUnnamedGuy Posts: 289 ★★
April 2019 in Suggestions and Requests
WARNING: THIS IS A LONG POST. SUMMARY AT BOTTOM (LAST PARAGRAPH).

Remember that Nick Fury bug? You know, the one where he’d remove two debuffs at the start of the fight instead of just one?

As you can see in the description of the synergy, the words “a” and “the Debuff” are used, indicating that this is intended to work only for one singular debuff. Yes, this fix screwed over a lot of people who weren’t diving deep into the character’s abilities to understand why this was a bug rather than an intended function of the character, but the change was justified because it was not working as described.

That said, let’s take a look at Masochism and Buffet. For those who don’t know exactly what those are just based on the names, here’s a screenshot of their descriptions: 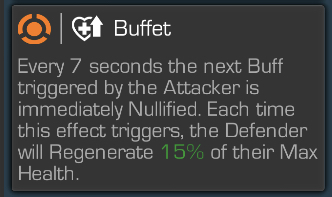 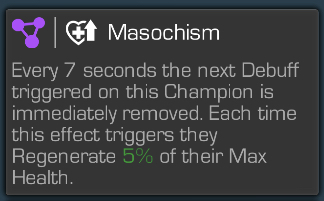 Keep that description in mind as you read Hyperion’s Special Attack 2 description:

In this fight, Masochism is the node applied to Dr. Strange. The node uses “the next Debuff” and “a” in its description, implying that it is intended to remove just one debuff. Let’s take a look:

Ignoring the fact that my Hyperion is very shiny and powerful and you’re all totally jealous, we can clearly see that Stun triggers here. It says so on the right side of the screen. Armor Break also must trigger, since there is a 100% chance of that occurring, and there is not an ability accuracy reduction node or debuff immunity or anything for this fight. This means that Masochism is, in fact, removing two debuffs instead of one. Though I haven’t gotten a clip of this for Buffet, the same idea applies there as well. If multiple buffs trigger at the same time, they will all be removed.

This Masochism behavior is true for Blade’s well-timed block ability as well. In a thread by @mAleksandar asking about this issue, we got a moderator response (the mod response is the first comment after the OP):

To summarize, Masochism/Buffet were described the same way and functioned the same way as Nick Fury’s Restoration Kit synergy. The only difference is that Nick Fury’s Restoration Kit helped users while Masochism/Buffet hurts users. The one that helped users more than described was changed to fit the description. The one that hurts users more than described was changed to match the ability. That inconsistent treatment is simply unfair to the players. These descriptions were identical, and should therefore be treated identically. They should both either match the description or the in-game effect. The lack of consistency with issues that help or hurt the player base is frustrating and unfair. Thank you for your time.
7
«12»