tafre Posts: 559 ★★★★
September 2019 in Bugs and Known Issues
The title says it all. CapIW can apply a petrify debuff via his signature ability (percentage of this debuff being applied depends on the sig level) on parries with 25% effectiveness, if there is a tech champ on the team and the duration can be extended via adding IMIW into the team. This debuff is supposed to reverse healing and passive power gain effects but it has only been reversing healing and not working against power gain effects. I have tried this against Dr. Strange, Symbiote Supreme, Hyperion etc. and stacked up at least 4-5 petrifies most of the time but they still ended up gaining power which should not happen. I am sending a video of me fighting a Hyperion in arena and he still passively gains power even when I have 4-5 petrify debuffs on him. 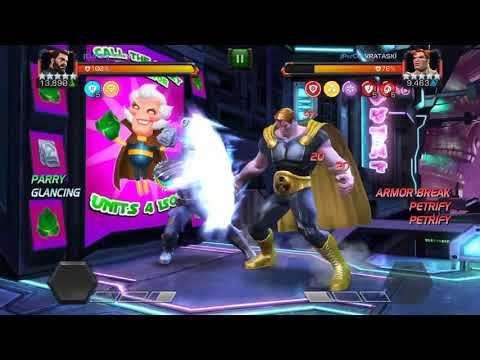 His petrify was working against Symbiote Supreme in 6.2.1 when it first came out but for a few months it has not been reversing passive power gain effects. His sig ability only says: "Tech: X% chance on a Well Timed Block to place a 25% Petrify Debuff on the opponent for 10 secs." but the ability of the petrify debuff is not specified like it is specified on Void's character description, which says: "Petrify Debuff: Reduces oppnent's Regen and Power gain rate by a flat X%." Can somebody check if there is anything wrong with CapIW's petrify?