SeanFlik Posts: 41 ★
November 2018 in Suggestions and Requests
Alliance Crystals
I used to buy the alliance crystals all the time. They had boosts, iso, and unstoppable colossus. However, after I maxed out my 2* and 3* unstoppable colossus and reached level 60, the crystals became close to worthless as I had no use for the xp boosts and the microscopic amount of iso wasn't worth the loyalty. On top of that, the ability to purchase more than one of these crystals a day was removed.
It would be nice to see an Uncollected version of the alliance crystal, featuring better boosts (i.e: 30% health and attack boosts), more iso (i.e: five stacks of t5 iso), and a chance at getting a 5* unstoppable colossus.
Additionally, I'd like to see the ability to purchase more than one alliance crystal at a time return.

Solo Crystals
When solo crystals were first added, they added a really nice incentive to regular gameplay features, like arena grinding, or using specific champion classes. However, with the passing of time, the crystals have not been buffed at all. They may perhaps offer a nice reward for newer summoners with mostly 2* and 3* champions, as those 2* and 3* signature stones might be nice. On the other hand, when you have a roster of mostly 4* and higher champions, 2*s and 3*s are rarely if ever used and therefore these crystals and their rewards are basically worthless.
Instead of just buffing these crystals, however, I'd suggest an uncollected version of lesser solo crystals and greater crystals, offering 4* signature stones, awakening gems, arena boosts, and a smaller chance to obtain 5* signature stones and arena boosts, and maybe t2 alpha fragments. The price on these new uncollected crystals should still be the same as the current ones in my opinion, and the current crystals' prices should be cut in half. This makes perfect sense to me because if you have a roster of mostly 2*s and 3*s, you won’t be able to achieve the same milestones in the solo quests as someone with 4*s and higher champions (as 4*s, 5*s, and 6*s award significantly more points in the solo quests). Otherwise, the solo events should reward more solo crystal shards. The point of this is to reward players more appropriately considering the change in the game since these crystals were introduced.
prof hoff’s vid: 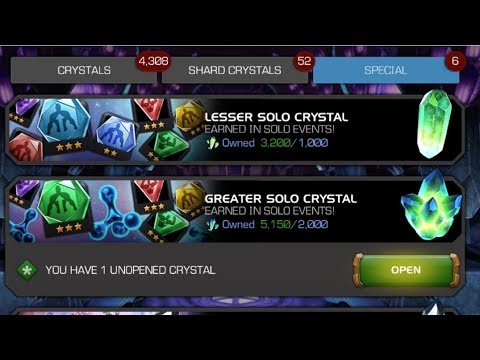 Increase the max xp level to 70
As far as I know, the max xp level for players has been 60 since the game came out. This potentially means a player could have been level 60 for three or more years. I really don't understand why this hasn't been updated yet, as it only takes a few months of regular play to reach level 60. Increasing the maximum xp level to 70 would finally give a use for all those xp boosts that have been collecting dust and all the xp going to waste in quests.
I realize probably the main reason this feature hasn't been added is because kabam does not want to reward any more mastery points. I have a simple solution: fine, don't. Or, reward mastery points that can only be spent in a particular category. Personally, I don't see any harm in giving players a few more mastery points, say one mastery point at level 65 and one at 70. In addition, I'd love to see some other rewards, such as t4 basic and class catalysts, t2 alpha fragments, and t5 basic fragments, as well a nice chunk of gold. Finally, the maximum energy wouldn't necessarily have to rise to 80, one energy point could be awarded every other level, with a new max energy of 75.
dork lessons has a cool idea on the idea: 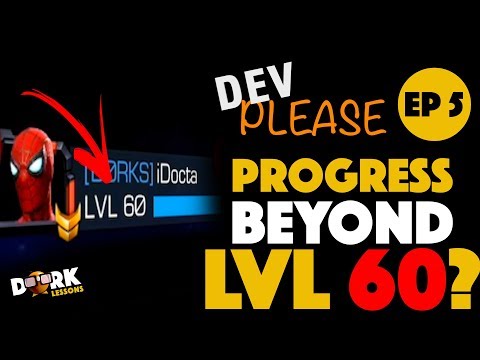 Gold and xp boost to quests
This is just a small buff I'd like to see, specifically in the Uncollected event quests. Currently, you receive less gold and xp (the xp doesn't really matter a ton, as most players exploring the uc eq have already reached level 60. However, if the max level is ever increased, then the xp should be too) in the uncollected event quests than you do in master mode or even heroic. How does this make any sense: players that have better champions which require more gold to upgrade are given less gold than players with weaker champions that require less gold?? Honestly, there would be no harm in multiplying the gold and xp rewards by 10, i.e: winning a fight currently rewards about 150 gold, this would be increased to 1,500 gold.

Unit offer revamps
Everyone still gets those semi-random offers after completing certain quests or opening a specific class or tier of champion from a crystal, such as a 3* crystal for 400 units, etc. I don't think I've seen a single one of these old, outdated offers I'd even consider. 400 units for a 3* when you're an end-game or even mid-tier player is ridiculous. I'd like to see almost all of these offers scale down in units as a player progresses. For example, the 3* crystal offer could still be 400 units for a brand new player, but as a player progresses, the price would go down and down. We've seen this a little with the recent price reductions on premium crystals for those who have progressed through the story quests and received specific titles (i.e: uncollected). I'd like to see a similar application to these offers, where the offer's price goes down increasingly for each milestone a player hits.
For example, the 3* crystal offer might scale like this:
New player with not much progress- 400 units
Player with the Contender title- 300 units
Player with Proven title- 200 units
Player with Conqueror title- 100 units
Player with Uncollected title- 50 units
*note: this probably isn’t exact in any way, this is just an example. I don’t have the time to go over every offer, this is just the first one I thought of. I do think the uncollected final price seems fair, as for 50 units I might actually be tempted to occasionally buy one.*
I’d like to also see the premium hero crystal discounts even more discounted. Most mid-tier and higher players who have a strong roster of 4*s and higher aren’t gonna waste 60 units to most likely get a 2*. I think something along the lines of 20 units would at least be considerable.
brian grant aka contestchampion has a solid vid outlining the units to items ratio and what fair costs should look like: 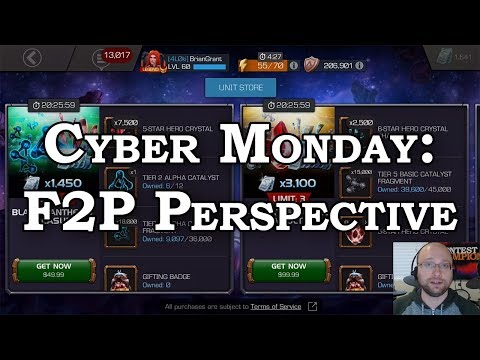 Alliance/Arena help
Another really small change that I think desperately needs to be added, is simply a “help all” button for alliance help requests. I’ve heard rumors that kabam once tried implementing this but it bugged the game, which if it’s true, can’t you just fix that lol? On the same page, can we have a “request help for all” button, which requests help for all of your champions in arena that are in cool down at once?
prof hof’s vid: 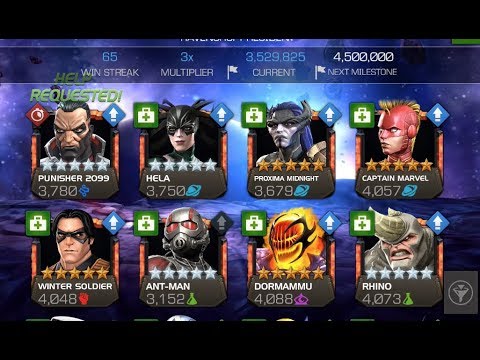 Display signature levels on champion profile
An additional quick thing I’d like to see added is simply displaying the signature level of a champion on the champions badge/profile, whatever. This would allow you to quickly look over where all of your champions’ signature levels sit.
dork lessons’ vid: 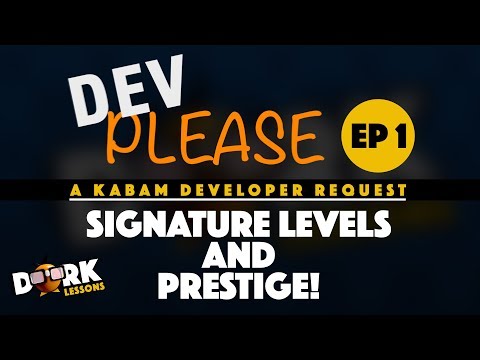