Kabam: So you have an event quest for me?

Writer: Yes sir I do. And this one is sorta continuing the storyline of the fantastic four coming into the contest one at a time.

W: Ah I see what you did there

W: So anyway, I was thinking we could make Ant-Man Johnny and Ben go to this floating water thing

K: Was that supposed to be a surprise?

W: Should I make it more subtle?

K: No that sounds like a lot of work.

K: Ok so then what happens next?

W: So they go into the water thing through a “rift” without hesitation.

K: Wait aren’t we reusing the rifts for the side quest?

K: Tying in side quests to the main story is tight

W: Yeah so anyway then they go into a bubble in the water thing that’s completely dry

W: And then they get attacked by Namor

W: And then Sue Storm shows up and tells everyone to shut up and calm down

W: Yeah but she’s gonna be the peace keeper a lot in this quest

K: But why would they be so aggressive to each other in the first place?

W: So then Sue says that namor is good now

K: Wait, namor, the famous nemesis of the fantastic four?

K: Well I bet it’s gonna be really hard for her to convince everyone of that

W: Well except for Johnny, but he’s really stupid and petty, so no one takes him seriously.

W: So then they go and forage for garbage for a while, but then namor ditches them and says he’s not going to let them ruin his plans

K: sounds pretty evil to me

W: Yeah well then they follow him and hear him talking with Yellowjacket about—.......

W: I’m not really sure. Maybe we could just have little word snippets

K: Oh yeah we could like have all the random words we’ve had from the last few event quests

K: So then they sneak back and tell Sue?

W: No they yell at Yellowjacket

W: So then we can have a super hard boss fight that might make a lot of money

K: So what happens next?

W: Well then they discover that the way they would get out of the water thing would actually kill everyone, so they have to stop it.

K: Would it kill the people trying to escape?

K: Would it only kill people in the water thing?

W: So then they go back to the dry thing and tell sue that namor is evil

W: And then Sue says shut up again and then you have to fight her

W: And then while you’re fighting, the death machine gets turned on

K: Oh my Gosh. So everyone dies? That got dark.

K: Whew, for a moment I thought I wouldn’t get to make money from namor and invisible woman.

W: I know how much you love money, sir.

K: I do love money

W: So anyway then the machine shuts down

W: and Sue says that she took the power source that kills everyone out

K: How did namor and Yellowjacket not see the power source missing?

W: So then they hook the machine up to the silver surfer

K: Wait the silver surfer is here too?

W: Yeah but he doesn’t really do anything until he’s convenient to the plot

W: So then they escape

W: Yeah well I think that this month will be super chill, good rewards

K: Hopefully no one questions something fundamental about the game, like champion balance 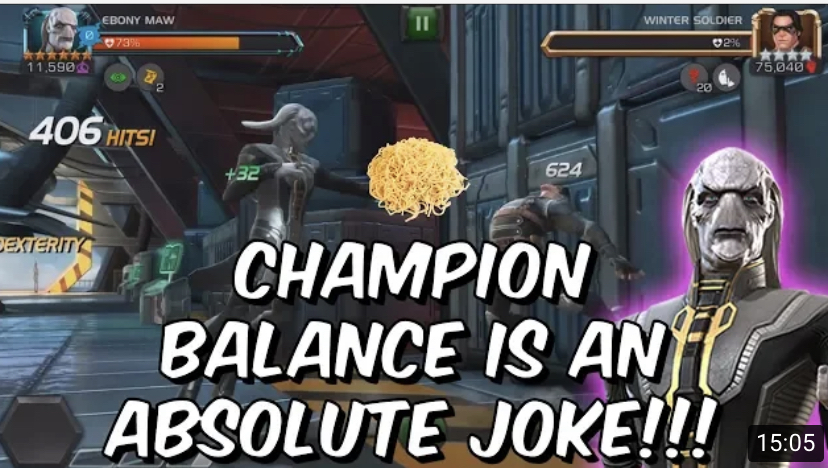 Let me know feedback, how I can get better at the dialogue, etc.

Also let me know if you want more. Of course, that would mean you’d have to read the story in game lol.
20