Home › Bugs and Known Issues
Summoners, we are aware of some issues currently affecting Dungeons, and possibly other parts of the game. We are working to resolve this as soon as possible, and will address the knock ons when we are sure this is all resolved.

tafre Posts: 195 ★
February 13 in Bugs and Known Issues
Sym Supreme has always had issues with his nullify not functioning properly and I have one bug and a possible bug, however the second one is probably working as intended so it is just to ask the question. I am playing on the 25.3 version of MCOC using an Iphone 6s with the 13.3.1 IOS update.

I will be attaching the screenshots of the abilities as well as a video which illustrates the bugs Sym Supreme has with his nullify, also a possible bug on Annihilus.

Here is the video and the list of issues: 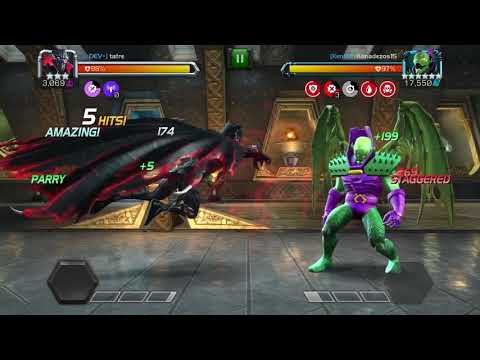 a- In the beginning of the fight, Annihilus gets his Cosmic Control Rod, I will use the CCR acroynm from now on, nullified but his "IT'S MIIIIINE--!" ability fails to trigger as he has no fury buffs while he should have 3 of them which is clearly stated by his ability.

b- Around the 15 second mark in the video, the 10 second cooldown for the CCR ends and even though I have 6 stagger effects, only 2 of the fury buffs are nullified. This seems pretty random because I think it should either be all the buffs getting nullified or none of them getting nullified.
The same thing happens during the 52 second mark as well. I have 6 passive stagger effects while CCR cooldown ends and this time I only nullify 1 of the fury buffs, the interaction seems totally random.

c- Around the 27-28 second mark in the video, Annihilus has 3 fury buffs and his CCR is clearly inactive. I launch an sp3 which triggers all blessings at once and after the sp3 ends on around the 40 second mark, Annihilus still has all 3 of his furies all of which should have been nullified due to Chthon's Blessing being activated.

2- The second issue is against Aegon in the abyss. Unfortunately I do not have footage of this encounter got deleted. First of all, Aegon has this Abyssal Enhancement which reduces the opponents offensive ability accuracy by 100% unless you are using special attacks. I thought Sym. Supreme would be great against this guy since I would be constantly nullifying his 6 fury buffs with my sp3. However the furies on Aegon never got nullified even when my Chthon's Blessing phase was active. I have 2 questions regarding this issue:

a) Are all the blessings activated after the sp3 attack? It states that the sp3 actiaves all of them so I thought that the nullification of the fury buffs on Abyss Aegon would trigger after the sp3. (I had the same issue using Magik as well, used an sp3 and none of the fury buffs got nullified and I apparently got no boost to my attack with Magik's sp3 ability since it only hit around 9k at 5/65 with boosts)

I would really appreciate it if people can look into this interaction since it feels like Sym Supreme constantly has some issues with his nullifies. I run 5 points in MD and these issues hinder my fights.
@Kabam Zibiit @Kabam Miike @Kabam Vydious @Kabam Lyra @Kabam Porthos @Kabam Carbon

Sorry for the long post but I wanted to be as detailed as possible to express myself clearly and to avoid possible misunderstandings. I hope somebody actually checks this out.
0