I am very pleased with the current mechanics of Sentry, he is fun to use and I like the idea of ramping him up to increase his damage. Unfortunately, he does not seem to exhibit any ability that shows he has the power of a million suns. Here's a suggestion to tweak Sentry and make him more useful on other contents. 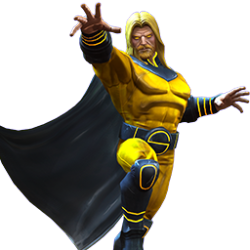 Passive:
• With the power of a million exploding suns, Sentry takes no damage from Incinerate effects and each Incinerate grants Sentry +3% increased Attack Rating for each Reality Warp

Heavy Attacks:
• 75% chance to Armor Break, removing an enemy Armor Up per hit and applying 666.67 Armor Rating reduction for 12 seconds. This effect gains +5% duration and Ability Accuracy for each Reality Warp

Special Attacks:
Special 1: Light Blast – Sentry punches his opponent before unleashing a Light-based Energy blast.
• 100% chance to Incinerate, dealing 509.1 Energy Damage for each Reality Warp over 10 seconds.
Special 2: Soaring Strike – Sentry leads with an uppercut then loops around for a flying double punch.
• 100% chance for Cruelty, increasing Critical Damage Rating by 252.84 for each Reality Warp for 8 seconds.
Special 3: Channel the Void – Sentry transforms into the Void, creating a black hole that consumes the opponent.
• When Health is below 50%, Sentry consumes one Reality Warp to Heal 2354 Health over 15 seconds.
Signature Ability: Molecular Reformation – Reality Warps persist from fight to fight and Sentry has a chance to gain Indestructible when he loses a Combo.
• When Sentry loses his Combo, he has a 100% chance to become Indestructible for 0.5 seconds per Reality Warp.
• Reality Warps persist with Sentry from the previous fight.
0