Some relative damage I did for fun

TP33 Posts: 1,442 ★★★★
January 7 in General Discussion
So I’ve got some champions, not much to do, some stuff I want to know. So I run into ROL with one champion at a time and give myself 100 seconds to do the fight. After 100 seconds I quit out. Take note of the damage I’ve done, and then put it into a table to find out relative damage. 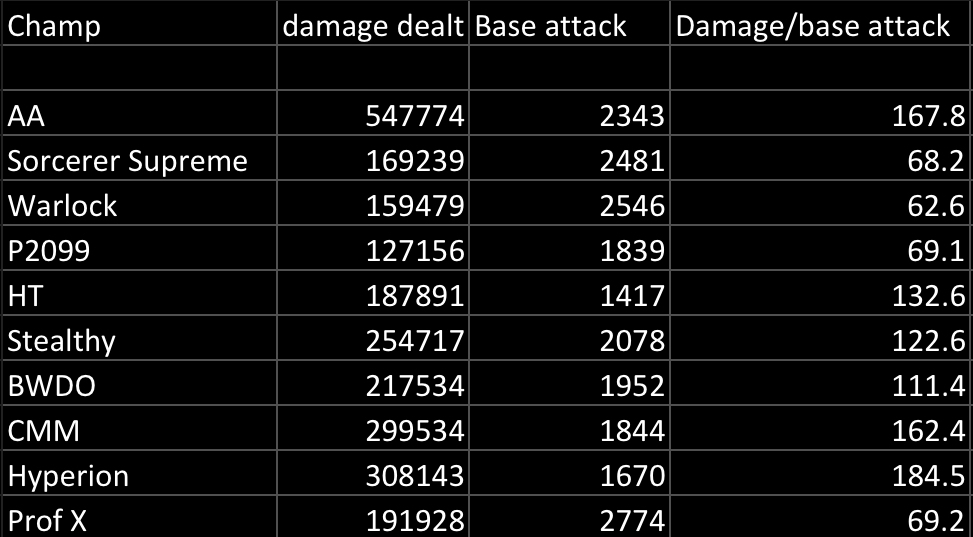 I define “relative damage” as the damage dealt in the 100 seconds per base attack point, essentially using these calculations you could figure out the approximate time it would take to do a fight with that champion at any rank or level. My results pool was limited but I’ll try to do every champ in game (might be hard with those I only have 2* though)

Hyperion placed first, he has low base attack and does massive damage with heavy spam -L2 - L3 combos. Of course Hyperion is an RNG dependant champion, I could’ve theoretically done worse or better, however the RNG j got in the fight I would define as average

Archangel next, big boi damage. In fact he finished the fight in 98 seconds but I’ll just count it as I got some decent RNG.

CMM third. Didn’t use energy synergies and she still slapped, nearly ran out of binary towards the end. Also I got pretty bad Armour break RNG, like 4/5 max

HT was a good fight, when doing calculations I did factor in class advantage/disadvantage (didn’t write it for AA but if you do the math you’ll realise the numbers don’t match, that’s why)

Stealthy didn’t surprise me, he has good damage but nothing extraordinary (he’s unduped as well)

BWDO, a newer champ for me and boy was I surprised, damage on par with Stealthy, didn’t land many intercepts mainly due to passive AI but was still more than happy with the result

The rest underperformed but are still decent champions. Warlock got 0 heavy crits which really knocked his damage down and if I did it again I’m sure I could squeeze out at least 80/90. Sorcerer Supreme didn’t have any buffs to nullify so not many specials and in turn armour break. Only champion to finish on a full yellow bar though (even though I got hit 4 times going in after a heavy and he L1s)

Overall I think this is an interesting concept. 0 synergies, ROL WS no boosts and just raw numbers in the end. Kind of an unbiased, fair, damage test. I’d love to see ones for champs like Ghost, Quake, NF so I might try them later on.
4