First base abilities
Takes -100% damage from coldsnap incinerate and shock
So this acts like an immunity in that no damage is taken however because it is worded as a damage reduction the debuff is still active which means you still heal ½% health every second (with SS base regeneration rate at 100%.) from willpower but also have the caveat of any interactions that trigger on debuffs still come into effect (think voids direct damage on debuffed opponents). Additionally each counts as a unique buff for SS other abilities this makes him a great option for full debuff nodes and makes him have a significantly easier ramp up of damage especially when multiple debuffs are present.

Each hit deals a burst of energy damage per buff on silver surfer
This is surfers main way of ramping up his damage as he builds more and more buffs and hits harder and harder with burst. This allows him to get around both physical (red hulk) and critical (doctor doom) resistance as the burst is based on base attack and buffs active and will deal the same burst damage regardless if the hit is critical regular or mitigated by armour/resistance. However note the burst is energy not direct so he will deal spectacularly lower damage against a champion with high energy resistance like havok and much higher damage against a champion with negative energy resistance like beast.

First mechanic- power cosmic buff
So this is always active and being a buff provides energy damage on hit. If this buff ends for any reason (being nullified, or consumed using heavy) it will return in 9 seconds. Whilst this buff is active silver surfer will cycle through 3 dormant buffs (appearing as greyed out icons where buffs usually sit under your health bar), armour (increasing armour rating 24 seconds) fury (increasing damage 24 seconds) and combat power rate (this is not a power gain like hyperions but it increases the amount of power you gain from landing hits or being struck as supposed to just passively gaining power this is a 15% CPR increase regardless of star level 15 seconds) each scaling with tier and level. These rotate every 2 seconds and the buffs can be activated using a heavy attack

Heavy attacks
If one is available convert an active power cosmic buff into a phase buff causing opponents a 100% chance to miss for 1.1 seconds. This attack is largely just used to activate buffs however this miss can be used like tigras heavy to avoid projectiles, whilst it is just over a second with correct timing long specials can be dealt with by heavy missing the first potion and dexing out of the end. Second effect is activating the buffs, this is core to silver surfers damage and the miss allows you to heavy counter to select the buffs you want even on nodes like stun immune where modifiers make parry-heavy unviable. Finally inflict 3 armour breaks for 12 seconds, most of the time this is just to increase the regular hit damage which isn`t boosted by buffs like the energy burst is but it can also be used to counter champions like ghost that have significant utility shut down by being armour broken

Special attacks pause duration pause all buffs, dormant icon rotation and power cosmic refresh for the duration of the special animation- this is largely useful for getting more uptime on buffs which give SS a lot of his damage however thus does pause refresh on power cosmic buff so can lead to a longer buffs ramp up if you are throwing a lot of special ones.

Sp1 if available consume power cosmic buff to create 2 buffs based on whichever dormant icon is active. I personally don't recommend this as this deals significantly less damage than the sp2 and creates a lot of distance making subsequent backdrafts difficult. If at least 3 unique buffs are active gain a vigilance buff for 12 seconds preventing all missing. This vigilance can be useful if you are worried about excessive missing but at only 12 seconds compared to 24 on his easier to access buffs I can't really recommend this for damage especially given what the sp2 can do in the same 3 buff scenario.

Sp2- firstly this is where the big damage comes in as all burst damage (energy or physical) increases by 180% potency for the duration of this attack meaning it can really hit hard with 3-4 buffs active and feels great to fire off with it`is very invasive animation that covers a lot of ground. Additionally if 3 unique buffs are active you gain an unblockable buff for 4 seconds which just increases damage and since the sp2 will likely leave your opponent in the corner allows your to keep attacking if the AI is playing passively.

Sp3-gain a aptitude buff increasing the potency of armour, CPR, precision and fury buffs by 25% for 24 seconds, then refresh the duration of all silver surfers buffs, firstly the potency boosts doesn't really affect much aside from making the fury more effective and slightly boosting CPR since the energy damage scales with the number if buffs only not their potency, and secondly silver surfer does not have any critical rating boost in his base kit so that portion of the aptitude only affects the crit boost from dexing or heimdalls enchanted blades synergy, and finally armour which doesn't do anything if your not getting hit.
However if you have significant power gain so you can reliably get to the sp3 within the buff time window it will refresh all active buffs which can be very useful to keep the damage up and if you can (if the AI/circumstances permit) it is brilliant for longer fights to avoid silver surfer unceremoniously petering out once the buffs start to fall off.

Rotation
Personally I recommend activating fury for an initial damage boost whilst you are still ramping up his buffs, then CPR to make the push to the sp2 easier, finally armour as it doesn't really have any offensive utility outside of burst damage. IMPORTANT; incase i didn't mention this before activating a buff that he doesn't already have active refreshes the duration of his buffs (this only applies to base armour fury and CPR) and this is what gives his sustainability of damage in longer fights when used alongside the special 3. Then with 3 buffs active you if you can go for sp2 (quick tip since buffs are paused during specials you can dex for the crit buff to increase you burst damage further and then immediately sp2 which if you play right is unblockable) if not do a few more MLLLM combos until you have 2 bars of power and if it`s within reach activate the second fury buff for a bug damage boost. This is where it diverges on short fights just keep cycling the sp2 and you can burst the opponent down or in a long fight go for the sp3 to refresh all the buffs and keep the damage going for a long time, picking up the second CPR buff along the way to make your time easier.

Signature ability-energies of the universe
All of silver surfers buffs have 5-50% increased potency, this doesn't really do anything for the armour but when you have a lot of buffs and synergies active this can boosts up the CPR fury and aptitude buffs to really increase his damage. However he is one of those champions that if he awakened needs high sig to get the full benefit of his signature ability, however I personally think that the awakening is not required as it is more about having the buffs as supposed to what they do to unlock his full damage potential.
Synergies:
Note-for this we are just talking about interesting stuff lots of champion have armour and crit rate synergies so we will ignore them here

Mine travel through space- mysterio, night thrasher
Silver surfers board attacks generate 30% less power, this doesn't do much to be honest, silver surfer has no power control innate so he is not the champion you want to bring in when you are excessively worrying about power and this reduction only affects his mediums and specials, overall its ok if your in a matchup with an easier to bait sp1 than sp1 like hiemdall

Secret defenders-hulk, doctor strange
Reduce cooldown of power cosmic buffs by 3 seconds- This is quite nice as it means he has significantly quicker buff ramp up but doesn't really do much whilst you are solidly in the fight, overall this is very nice if you can fit it as it really helps build up his damage quicker and you spend less time waiting around to activate the next buff

Heralds of galactus-CGR, terrax, air walker
Once per fight if SS would take more than 25% of his health in a single hit instead consume the power cosmic buff and become indestructible for 6 seconds. This is a nice safety net overall but personally I recommend the heimdall or hela as this one has quite a few caveats limiting its usefulness. Firstly it requires a single hit to be over 25%, this does nothing to stop big debuffs or bane damage or lots of small hits such as tigras seven hit basic combo making it slightly difficult to line up. Secondly this requires you to have the power cosmic buff at the right time otherwise it is useless meaning you either have to temper your ramp-up or risk losing this synergies value by playing his normal rotation. Overall a bit too niche for most content but can be nice if you are building a team around him.

Other useful synergies
A lot of silver surfers damage comes from buffs and with his signature abilities potency boosts any synergy that boosts up buffs gives him a solid upgrade, so particularly good ones are

Cosmic supremacy-black bolt+ronan/kamal khan
Up to (based on star level) 30% duration on fury armour precision, cruelty and armour buffs- whilst the range is narrower than cosmic power the boosts is higher and fury and armour having 55% more uptime combined from both can really help SS`s damage and also the long armour makes him an interesting option for havok combined with his high energy resistance.

Heimdall
Any of hiemdalls buff synergies can do well the but personally I recommend the crit as unlike fury it won't interfere with triggering new buffs to get the refresh and it ties in nicely with silver surfers sig to give him a decent permanent crit boost, and since the only other way it can be triggered is by dexing it's a very nice overall damage boost. Also the cheat death unstoppable+indestructible gives him 2 morer unique buffs allowing him to get a final big burst combo if the fight doesn't go your way.

Increased firepower- this is both a buff helping his burst damage but it also helps his crit rate making his damage less underwhelming at the start of the fight.

Strategic sabotage-the evade charges mean you can safely throw heavies whenever you like even if the opponent has vigilance or another miss counter making his buff ramping much easier against more difficult fights.

Restoration kit- this works fantastically as it allows for essentially free healing with suicides or another debuff node that surfer isn't immune to. With max sig SS cap synergy and nick+deadpool for the regen it turns a 10% 3 second heal into a 18.75% over 3.5 seconds which for free is very nice (especially given we haven`t yet accounted for recovery so it is more like 20%) 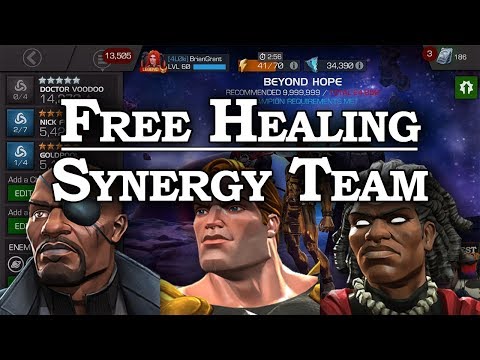 for more about this interaction