What’s the highest health we can get?

TP33 Posts: 1,441 ★★★★
August 11 in General Discussion
So prestige was hard and it turns out I’m really bad at maths. However health is a bit more simple, so what’s the most we can get?

Now first I have to consolidate on the definition of “health”. Everyone knows the most base HP points a champion can get is Sasquatch. Ok there post over problem solved we can all go home.

Health isn’t just how many HP points a champion has, it’s how many hits a champion can take. Regeneration is a part of a champions health, as are damage reductions and many other factors. That’s why for this post I’m going to be taking into account regeneration (I will cover how this is “measured” later), damage reductions, armour ratings boosts masteries you name it. I’ve done this kind of thread before but this one takes it to the next level, we’re using 6* R5s full boosts optimal masteries THE WORKS.

I’m going to say this now there are far too many champs in the game to do these equations on, that’s why when considering for this title I will only be looking at the top 7 most base HP champions (before I forget to mention all stats given are from auntm.ai and in game resources). These champions are (in no particular order)Sasquatch, Thanos, Mojo, Man-Thing, King Groot, iHulk and Apocalypse.

Starting at number 7 we have: Mojo 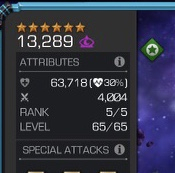 Now here come the first set of calculations. He also has a base armour rating of 17.7% giving him an extra “health” of 11278. You can get up to 55% more health from greater boosts and that will take his health up by 35045 points. Factor in 8% from maxing out the greater health mastery you have another 5097 health (who said those masteries were terrible again?) which gets him up to a maximum total of 115138 health. However he has negative physical resistance which is very small but not a good trait. Now you may think that this is A LOT of health. Which it isn’t compared to what’s next.

Next we have the one and only MAN-THING

Now add on the masteries you get 5409 and put boosts on you’ve got another 37190. Add it all together you can get 110218. Less than mojo as he has 0 base armour rating however for man thing a HUGE damage reduction he gains is this

Now I can’t do the exact maths on how much value this damage reductions has, it’s hard to quantify as each champion has different crit ratings and crit damage ratings, however if we take the “average” crit rating of 25% and the “average” crit damage rating of 180% then you can say that 25% of opponents damage gains a 180% increase. Remove this increase you decrease their damage by 25% of 180 which is 45%. This would mean against champions with the right crit rating and crit damage man thing would have a “health” of 140646 however this isn’t garunteed against all champions. I will count it but it’s not a definitive measure.

Next is the one and only big daddy apocalypse

Oh wait I nearly forgot 2 things. 2 masteries, inequity and resonate. I’ve ignored them so far because the health pools haven’t been in the highest competition and quite frankly I’m far too lazy to do the extra 2 calculations for the others, however now we’re hitting big boi leagues.

I know I know I can already hear you “what? How?” Well here’s how.

BUT. He has a high armour rating of 35%, put this the health mastery and the boosts together and we get ourselves 64228. Thanos unfortunately hasn’t for access to the maximum number of debuffs for inequity, in fact he only has access to heal block and stun, meaning a maximum practical redction from the mastery of 6%. Giving him only 3932 more health. His attacks are actually contact though, and maximum resonance will give him a weakness on physical hits of 13%, this will ALSO count as an inequity Debuff, giving him an increase of 13% and 12%, an additional 16385. The total now coming to 146151. But we are ignoring the most important part here. His sig ability.

Numéro trois, the one and only King Groot

Base health of 75422
Boosts masteries and all that funky stuff give us 160094 total health. But Sasquatch has a trick under his sleeve. His regeneration.

But that’s not the most

Number 1 and living up to his name it is, the immortal hulk.

Put on the boosts masteries and armour rating we have an equation that looks like 73341 + 40338 + 5867 + 26403 (iHulk gets maximum bonus from inequity thanks to his suppression debuffs which can go up to 14) + 15401 (base armour rating) which = 161350. A lot of health but less than Thanos at number 4, however iHulk has a trick up his sleeve, he can regenerate a lot. After I immortality he consumes all Gamma Radiation to regenerate. Now his gamma radiation reaches maximum at 100% health, meaning in theory if he built enough gamma up from taking hits, passive degen, rage attacks and his L3 he can die and come back to life over and over again effectively granting him infinite health. But this has a long cool down of 50 seconds which means it can trigger twice in one minute which means we can count 2 of these regenerations in our 1 minute rule (if we trigger one almost instantly and then the next at 50 seconds within the minute timer from the start of regenerating. I’m not sure if it’s practical to rely on something killing you in the short window between 50 and 60 seconds but it’s possible and doesn’t violate the rules) so we can count 100% of the Hulks health being regenerated twice, which gives us a collosal 484050 health. More than double that of Sasquatch even with Sasquatch’s regen taken into account.
9