Dr_Physico Posts: 56 ★
July 2018 edited July 2018 in Bugs and Known Issues
I'm in a one-man-ally since this AQ-week and thanks to the 30-minutes-timer, I played map 2 for the last 4 days on my own.
I usually take the left outside path in sector 1, taking away the power gain link to the miniboss, leaving this week's Spider-Man (Stark Enhanced) with this local and incoming nodes: 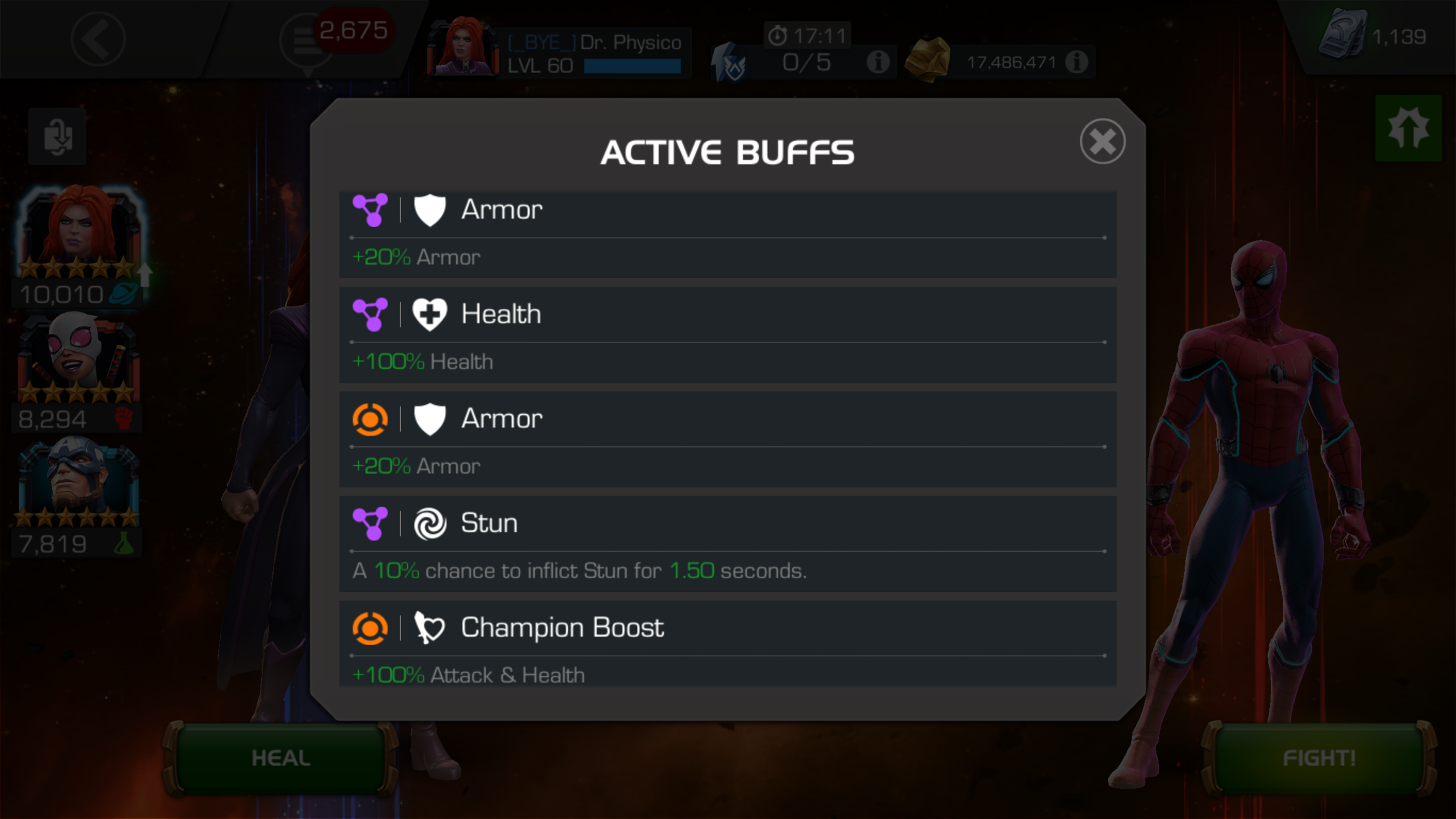 When I start the fight, this 2 stacks of armor are correctly shown as node buffs... but I can't temporarily remove them (this does work against node buffs, i.e. in the assessments last month on master, you had an armor node linked to the boss if you take the left, harder path. no problem to armor break and temporarily remove it).
I usually play with my 5* r4 unduped Medusa against this Miniboss. She does apply armor breaks on her medium attacks and should remove 1 armor each time, but this just doesn't happen. Not even with "armor shattered". The armors just stay there. And here is the real problem: they somehow even get more and more, piling up his defense until I hardly do any damage against 50+ stacks of armor. (adding a few pics as proof, like armor shattered and lots of stacks. damage on light hits with shattered armor and 54 armor stacks was low 100, medium hit was 168 damage. far less than she would normally do.) 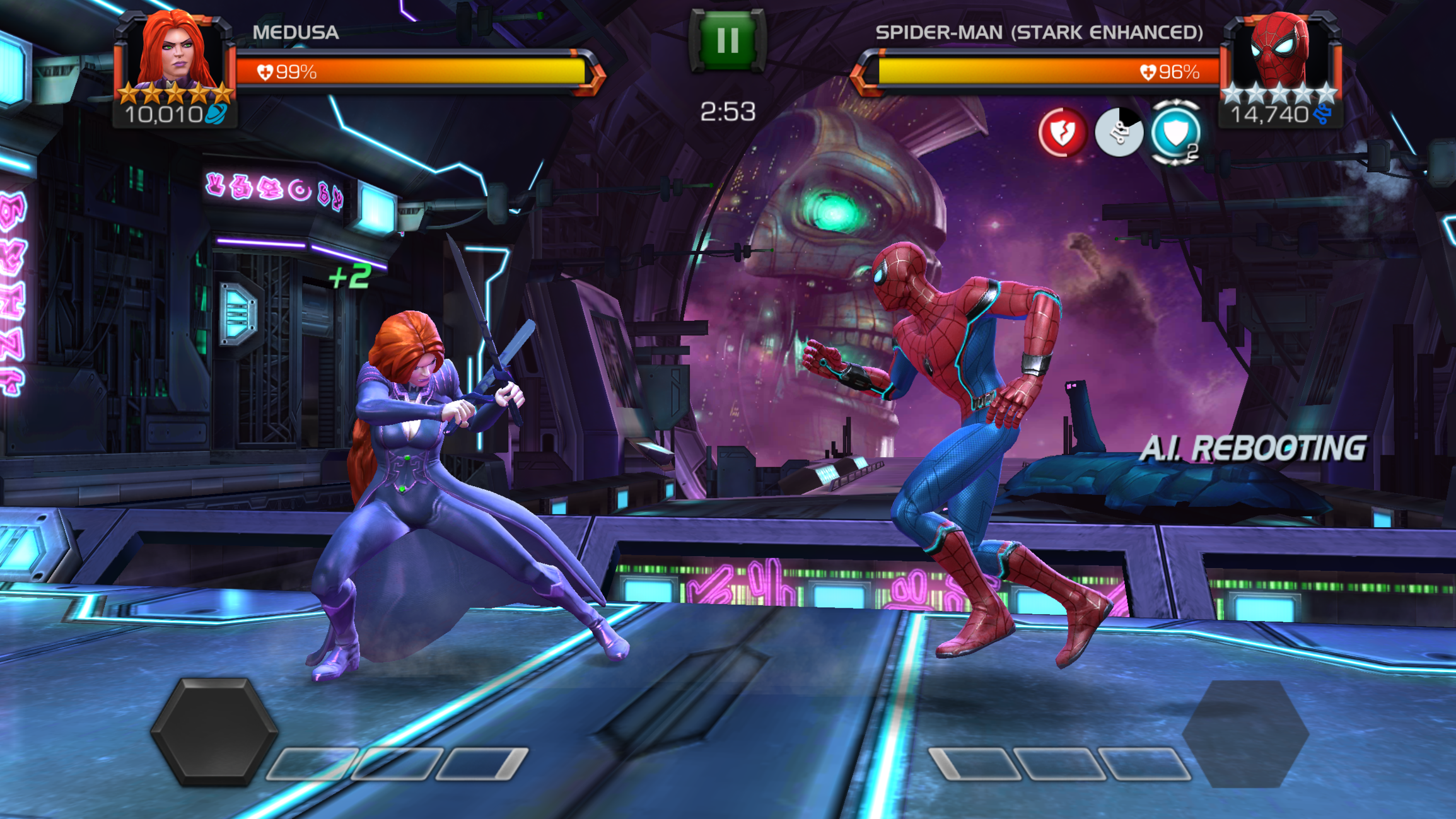 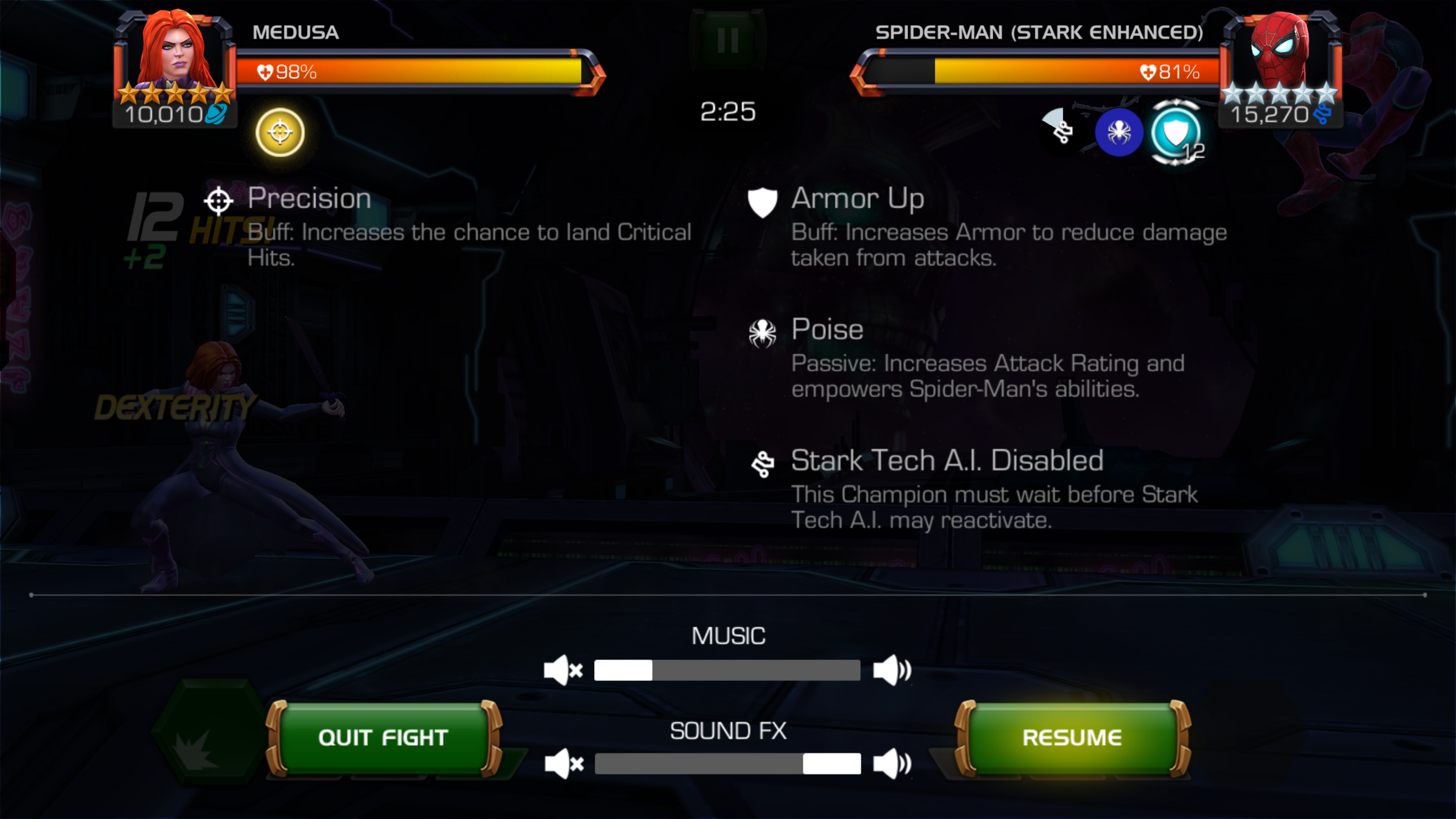 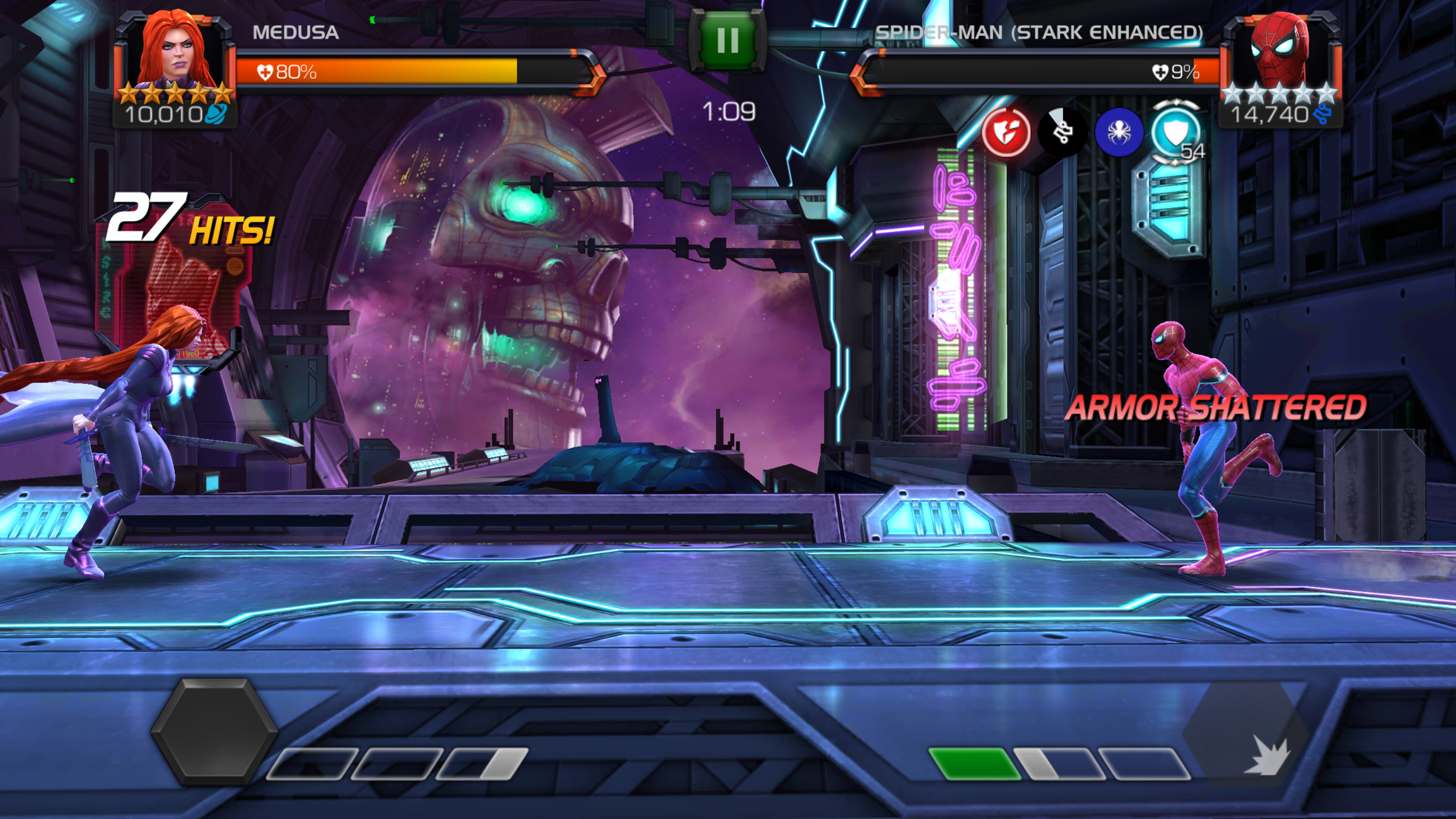 So the problem here are these "out-of-nowhere" piling and unremovable stacks of armor. There is no node like "Aggression: Armor", just 2 +20% armor nodes.


My guess here is, that somehow it's not possible to remove/nullify the armor, when applying an armor break/shattered. Nevertheless, since they are node buffs, they get renewed as if they were removed after a short period (I think it's 2 seconds?), but there already are the not-removed ones, so the renewing of node armor just adds more and more stacks each time.

btw, I add this here:
on the 2nd miniboss, there is a wrong buff-description in the pause-menu. I guess it should be the "Enhanced Special 2" (same symbol), but the text says "Replicate" (which Sparky doesn't have and isn't from the nodes). 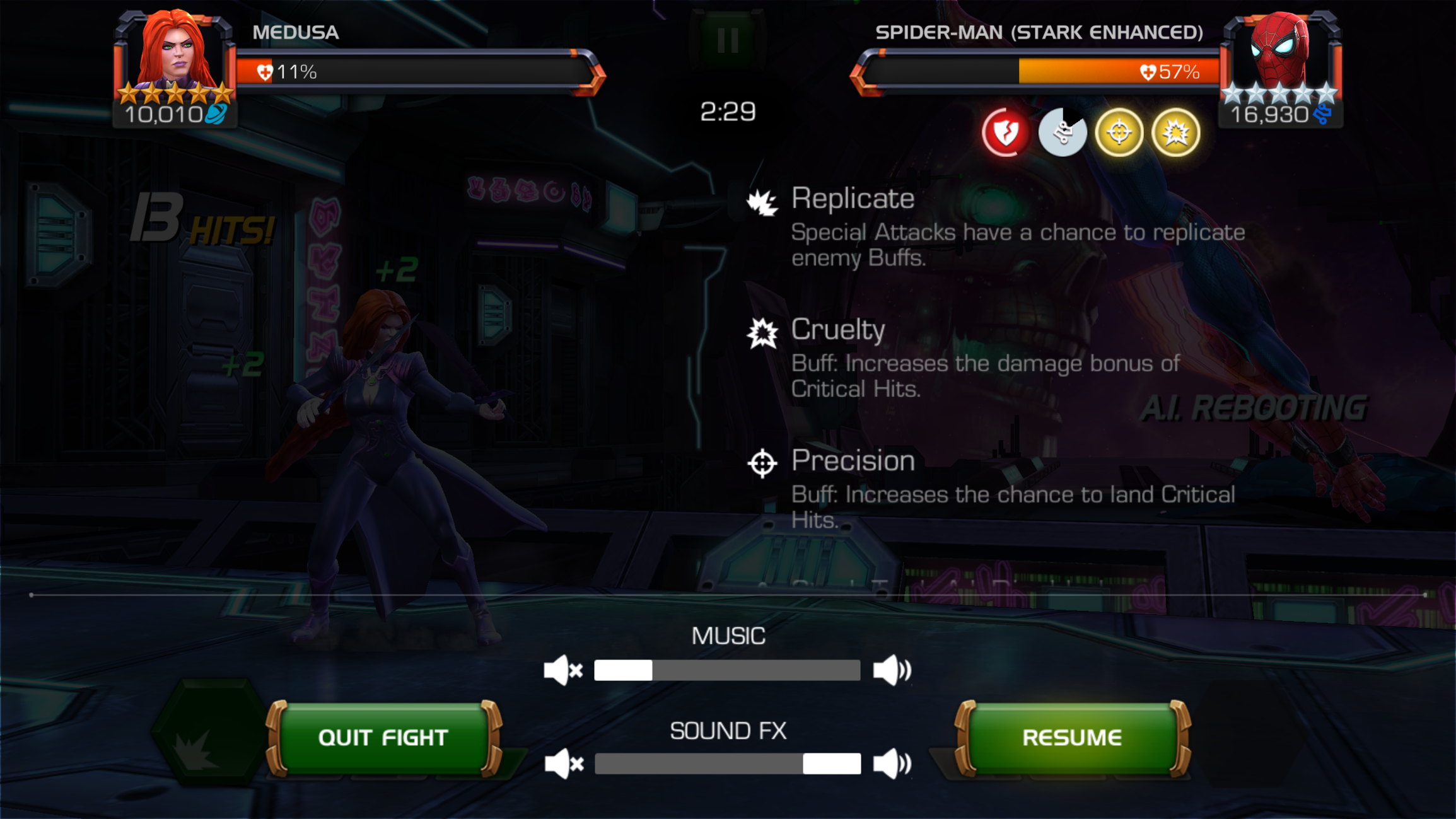