Looking Back on One Year of Playing MCOC

Trollllollllo Posts: 113
August 2018 in General Discussion
Well, it has been a year since I have started playing MCOC, and between the daily emergency maintenance's and the overheating issues, I actually got quite a few things done. So, lets go back a year in time to when I first started playing. I remember the day pretty vividly, I was bored, in my room, and desperate to do something. So I get on my Ipad, and start looking through games. I come upon MCOC in my downloaded apps (lol, I had downloaded it a few years back and played for maybe five minutes then got bored and uninstalled it), and think, "Hey, this looks fun," so I reinstall it and start playing.

Now fast forward a week, I'm fully into the game, logging on everyday to do what I could to advance quickly. To be honest, most of the time I didn't know what I was really doing. I hadn't known about the forums or reddit, so I had absolutely no idea of what a new player was supposed to do. I also didn't know anything about brackets in arenas, so I didn't grind them at all. I still have never grinded a single arena to this day. Its too much time commitment for me as a person still in school. But still, even through all my naivety, I still managed to progress. I was blessed with a four star Scarlet Witch in my first few weeks, as she would carry me through a lot of content, including Act 1, Act 2, and Act 3. The first five star I actually got was through the week long arena for one and two stars for five star shards ( I don't remember what its actually called), and it was Rogue!! She also carried me through a lot of content until I got better champs. And it was also around this time that I joined the alliance that I would stay with even to this day. It was a great alliance, full of people that were kind and willing to pass on tips to me to advance. It was 2 million rating when I joined. Now its 6 million.

Now, lets fast forward through time again to more recent times, to the day I got Sparky and Blade. I was on vacation at that time, and we had just ended our hold week (the first Alliance War season had just ended, and our alliance took a big hit to player count. We finally recovered from the loss of players just recently, about when Alliance War season 3 started), and I was openning my crystals. I wasn't expecting anyone good, as my luck has been pretty substandard. But then, to my surprise, Sparky pops out of a four star crystal, and then a minute later, Blade pops out if a five star crystal. I was shocked! I almost fell out of bed with disbelief. That day was one of the best days in my MCOC career.

Then came yesterday. My uncollected run. It started as a practice run just to get familiar with all the nodes and opponents on the path, but somehow, ended with me taking down the collector. The team I used was 5/50 Sparky, 4/40 Hulk, 4/40 AOU Vision, 2/35 Blade, and 5/50 Iceman. I used 4 team revives for the collector and 1 team revive on the path. Yesterday was also one of the best days in my career. It was so great, that I had trouble falling asleep that night.

That brings us to today, my one year anniversary. I am now Uncollected, with a pretty good roster (at least I like to think, you guys will be the judge of that), just shy of being in the 200k club, and not one champ that I have gotten through arena ( I like to think of it as a thumb damage prevention plan). This year has been an absolutely wonderful year, and I have high hopes for more (emergency maintenance's are not included in this statement) in the future .


My roster is attached below(bear in mind I have never grinded arena) : 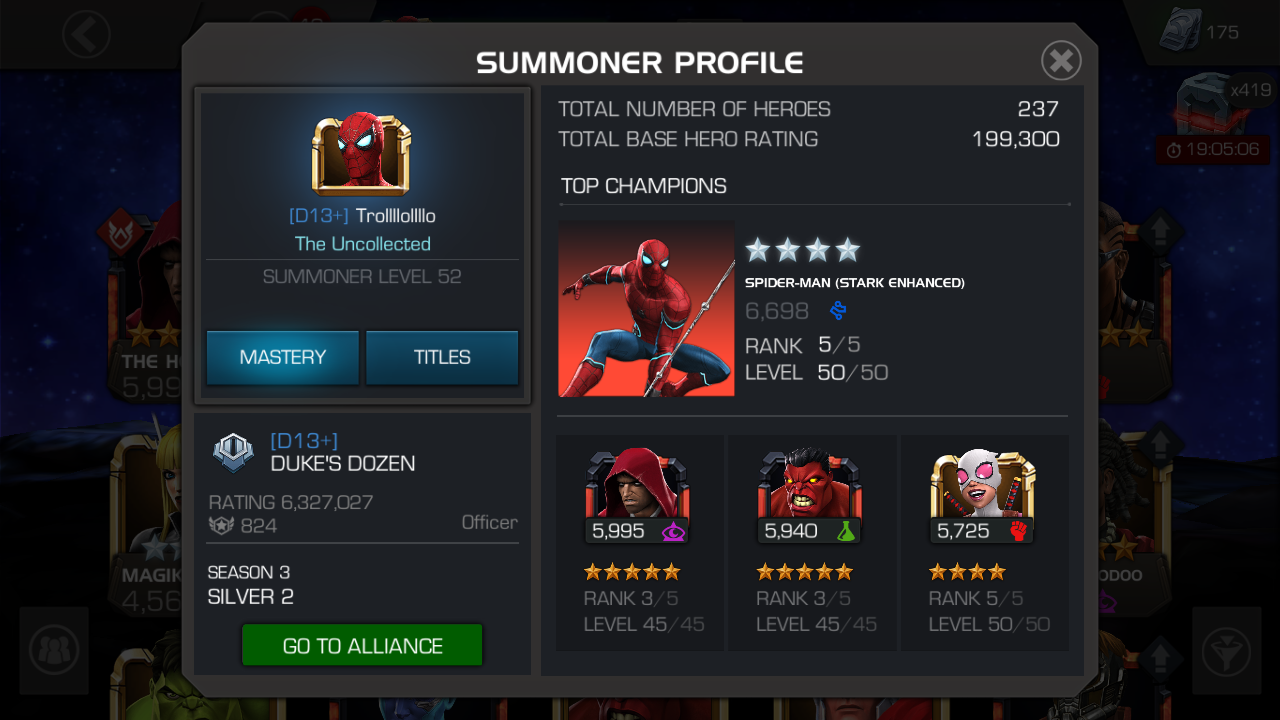 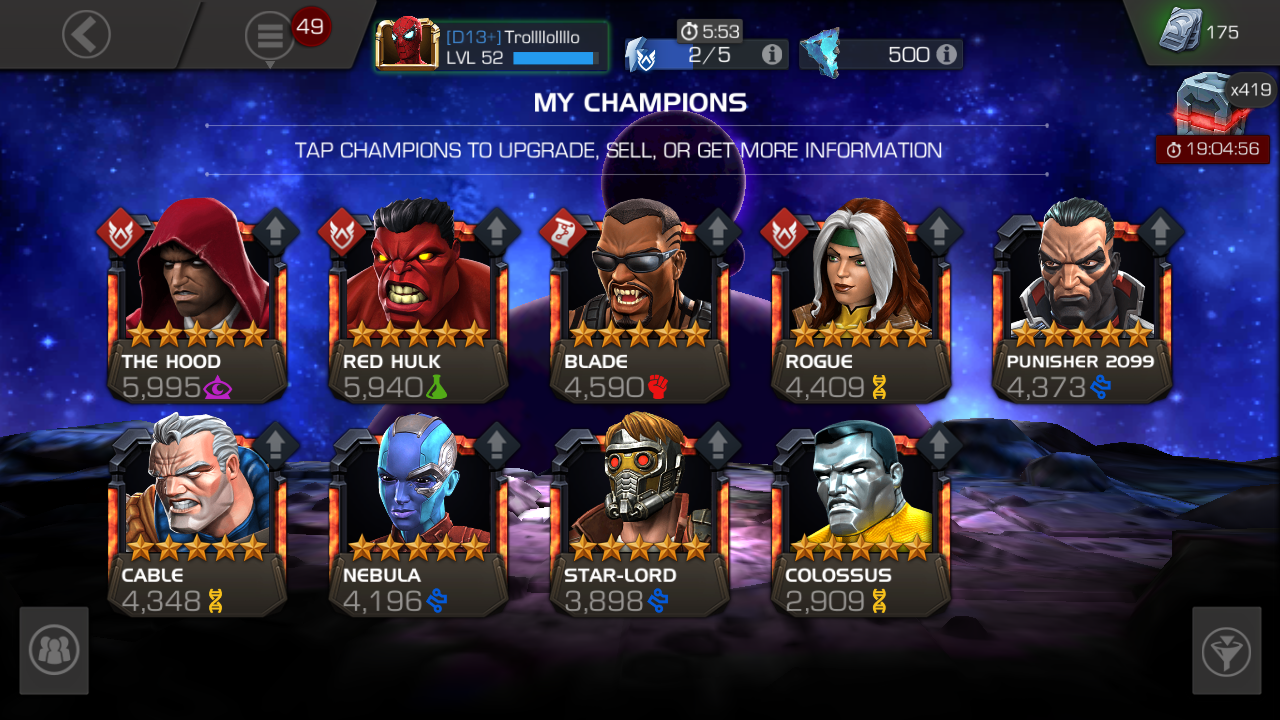 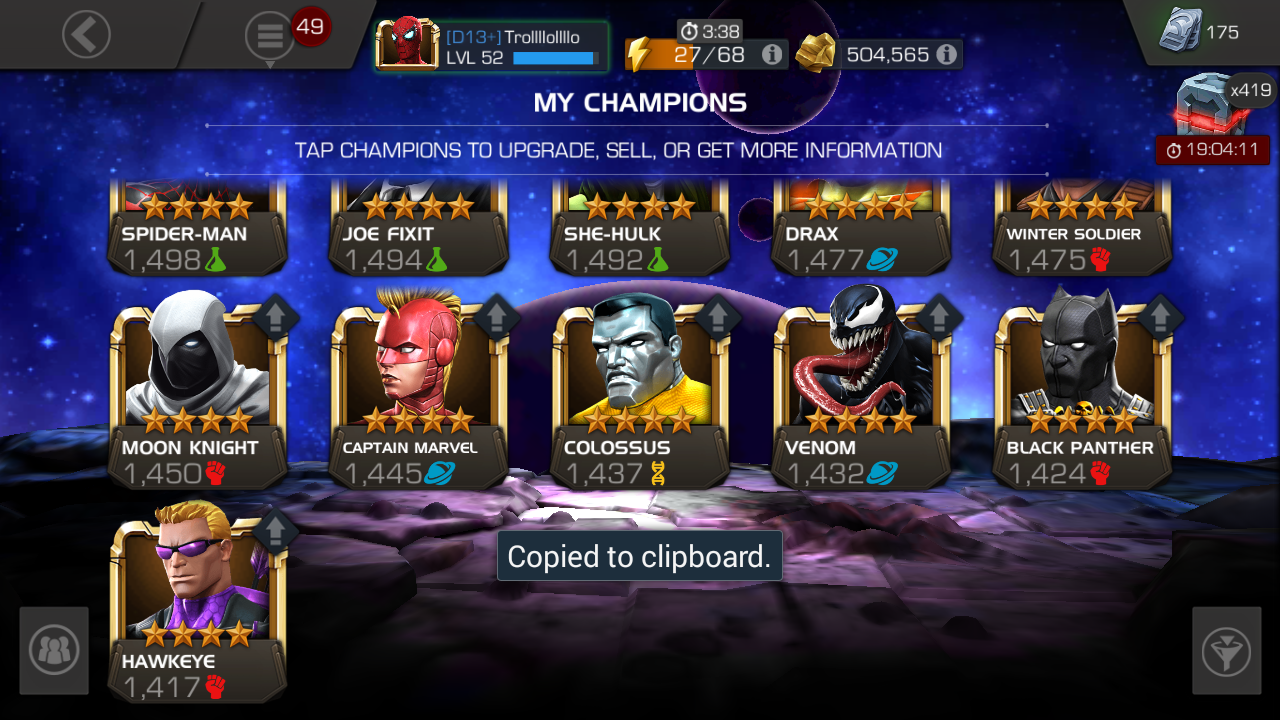 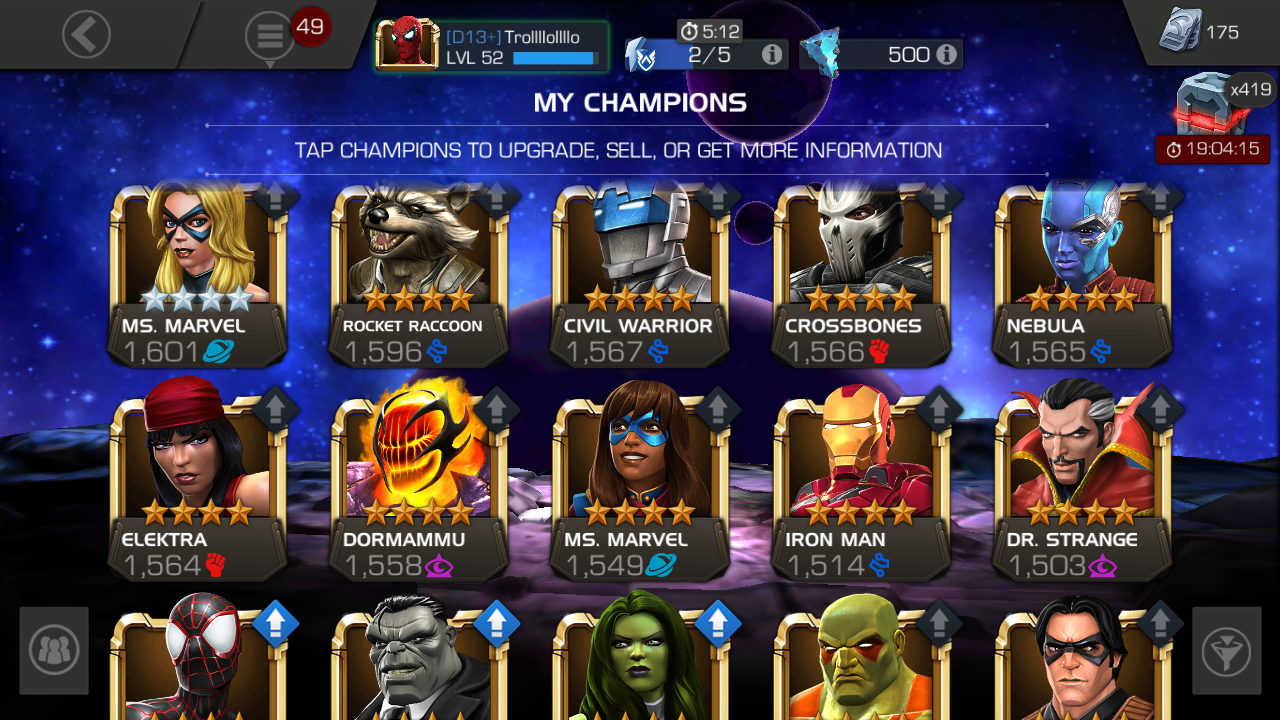 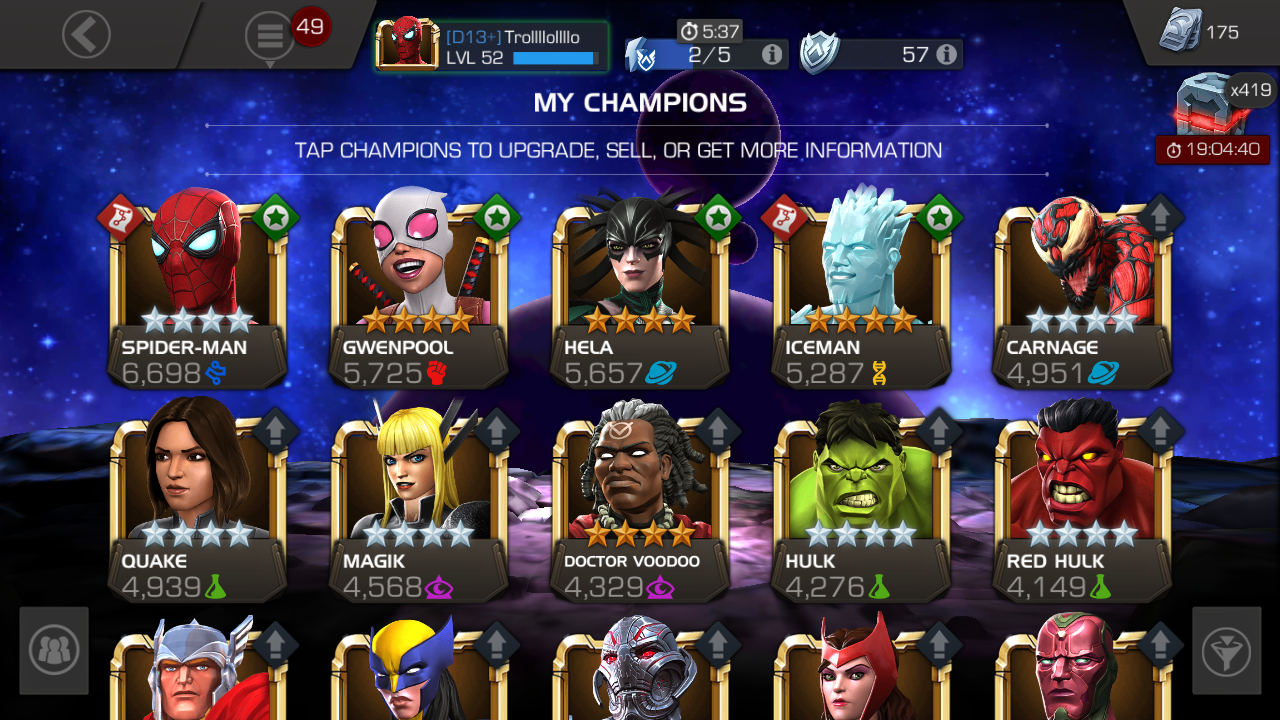 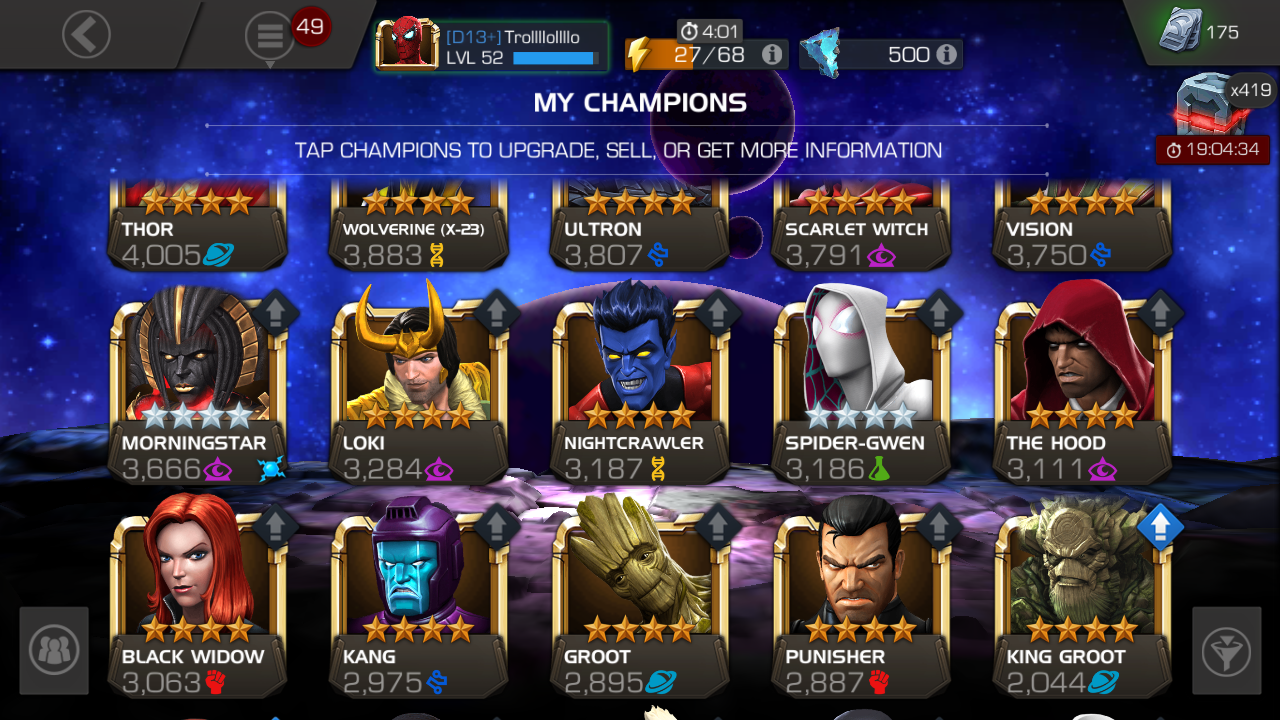