(6* Featured) I’m very lost on what to do. Advice appreciated!

Iron_Patriot_is_lit Posts: 1,844 ★★★★★
June 2021 edited August 2021 in Strategy and Tips
So as we all know, the 6* featured crystal just released today, and I’m hearing a lot of people say it’s mediocre. There are a lot of pulls in there that would be huge for me, and a lot that would be mediocre as I either have them as a 5*, have a champ that’s better in every way, or they’re just really bad champs.

To list a few of the pulls that would be huge for me: Mr. Negative, Odin, Shang Chi, Jabari Panther, CCM, Angela, Black Panther, and Sabretooth.

However I am still a progressing player and I’m currently stuck on 6.3.1, so it’d be nice to get some advice. I have nearly 35K shards so I can either afford 2 featured crystals or 3 basic crystals. I’ll try to post my current roster in a follow up post as I really don’t want this to get stuck in the approval abyss.

(6* Featured) I’m very lost on what to do. Advice appreciated! 70 votes 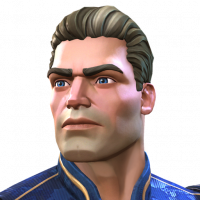