QuikPik Posts: 445 ★★★
January 2020 in General Discussion
About 6 seasons ago, Kabam changed their match making algorithm from strictly war rating based to something else. The old system worked well until alliances started tanking in the off season in order to get easier wars at the beginning of the next season.

I've taken the time to look at the alliance ratings for the top 50 in each tier. I know this isn't perfect as a small handful of alliances may have sold champs. But generally speaking it's a good gauge to the relative strength of an alliance. What I have found is shocking. 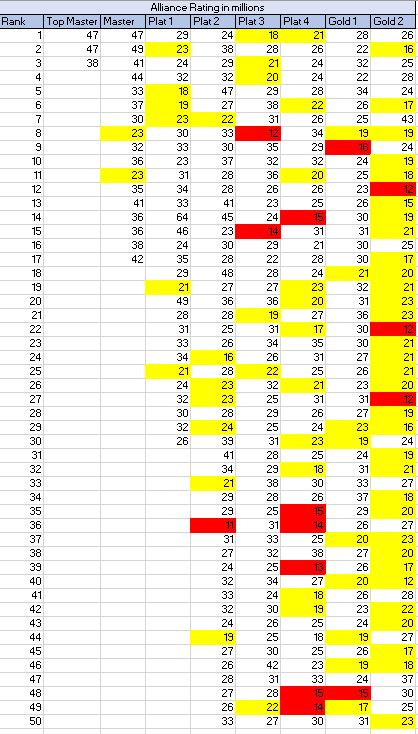 You're match making system is clearly broken. The top 3 in master looks OK but then it starts to fall apart from there. There are (2) 23m alliances in Master while you have a 64m and 46m in Plat 1. Certainly the 23m alliances in master are not better at war than alliances double their strength in Plat 1.

I think your primary match making criteria is prestige with war rating second. This is why you see so many different strength alliances within the same tier. There is no way that 18/19 million alliance in Plat 1 ever gets matched up against 46 and 64 million alliance ranked lower than them. In a fair system, you would not see such a wide range of alliance ratings within the same tier. Look at Gold 2, there's a 43m at #7 and a 12m alliance at #12. In what scenario is an alliance 1/4 the size only slightly worse in war ranking than a much stronger alliance?

In all tiers outside of top 3 master, you have much smaller alliances in Gold 2 on up. I'm not saying these alliances don't deserve to be there as they've won wars to get to their war rating. However, they are not getting matched with alliances at the same war rating and prestige. What you have is the best 4k prestige alliances at war gets a spot in Plat something. And so on it goes through the various prestige ranges.

It's great that you have increased the rewards for war season rankings but you really need to look at how you match alliances. You have also sort of fixed the tanking problem during the off season. At this point the integrity of rankings for seasons is completely gone. Why should larger alliances even care about war when much smaller alliances finish in top tiers and they don't ever get a chance to face them?