Interesting twist to the "gold problem"

DNA3000 Posts: 12,077 Guardian
March 2020 in General Discussion
I personally don't subscribe to the notion that there is a "gold problem" in the game in a global sense. As I discussed in my arena grind analysis there's plenty of gold in the arena, if you're willing to spend the time. If you can't or don't want to, that simply places you in the same position as people you can't or don't want to do dungeons (ne: incursions) or high tier AQ or competitive AW, or who can't find the time or energy to become Uncollected or Cavalier. That's a choice, and your rewards in the game will depend on those choices.

But that shouldn't be the end of the story, because it is still worth asking the question if there's something about gold that makes it, if not special, then different in a way that can generate this perception. Is there *any* way in which you could argue there is something odd about gold. And in between putting out remote access fires, I've had some time at home to analyze the game in more detail, and I think there is something worth discussing. This isn't a conclusion, but it is something I find interesting. If you *aren't* an arena grinder the game changes in a numerically noticeable way, it turns out. But it takes some analysis to get there, so if you're one of those people that don't like lengthy posts, this would be another one of mine you're not going to like.

If you aren't an arena grinder, where does your gold come from? Well, gold is in a lot of places, but after looking it over, I think the majority of gold that a player gets if they don't grind arena is basically going to come from duplicating champs and selling excess ISO. There are other places to get gold, but they don't seem to be as large, most of the time, as this one. If someone wants to itemize the rest, I'd love to see it. Or I might do it if I get stir crazy enough.

Except, that's not all. You also get shards when you dup a champ, and sometimes a max sig crystal. And shards are, in a sense, more champion crystals. So really, you have to account for what happens when you eventually convert those shards, and the amount can be (almost) double if you get max crystals. Factoring in that, you get:

Some crystals contain a single tier of champ, some contain ratios of different tiers. We can account for that: 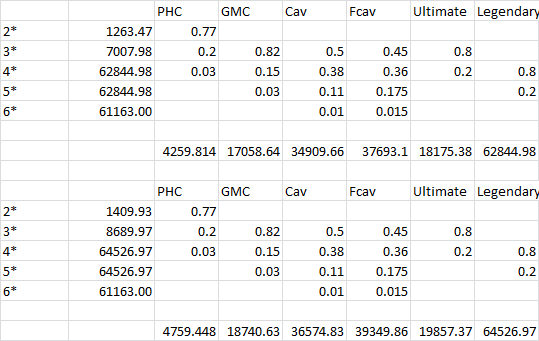 That's the average gold value of those composite crystals, for the case of every dup just being a dup and every dup being a max dup. Reality will, of course, be somewhere between the two numbers. This allows us to compute the average value of all those common champion crystals: 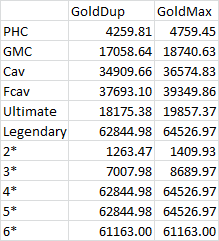 There is a punch line coming very soon. Here's the costs to rank up every tier of champ:

We can now do something interesting. We can ask what the ratio is between the cost to max rank a champ and the gold you get from duplicating that same tier champ:

5* champs reverse that trend dramatically. We don't even know what the costs will be for 6* champs because the last two ranks don't exist yet, but we can see that it will be higher for 6* champs. So if your "fuel" for ranking champs comes predominantly from duplication - to get ISO and gold - you will see a progression where fuel gets easier and easier to get up to 4* champs, and then becomes dramatically harder to get again.

There are a lot of reasons why this probably happens, which I've discussed in the past and are beyond the scope of this thread. But it does pose an interesting question regarding arena grinding's place in the game. In a sense the game makes arena grinding less and less important up to 4* rosters - say, up to about players doing Act 4 - and then becomes suddenly much more important.

It doesn't take a lot of arena to fill this gap - now. But the trend seems to be unsustainable. Perhaps we should be asking what tools we're going to need to address this upward curve over time, and start playing with them now. As I said when I started this thread, I don't subscribe to the notion that there's a "gold problem" with the game as a whole. But of course every individual player situationally has some bottleneck problem. For the specific case of gold for the players short of gold there is this extra component of the problem I think is worth Kabam's time to think about. Either the arena is going to become an increasingly mandatory game mode, or there has to be alternate sources of gold to break this curve. If not now, then eventually, because this going to scale in bad ways over time.

As I said, this is a bit of a simplified analysis that doesn't specifically account for every single detail. It is meant to illustrate one element of a more complex problem. For example, of course the gold you get from earlier tiers is going to still be coming in, and a more sophisticated analysis would try to determine the ratios of each champion you get and how that affects "carry upward" resources. But that analysis will have to wait for either myself to get more time, or someone else to dive in and continue the thought process. I felt this was sufficient to be worth discussion, not that it was the final word on the subject.
33