How to develop my team for Act 6?

Magrailothos Posts: 4,163 ★★★★★
May 2020 in Strategy and Tips
This is a long post; asking for long replies, so skip it if that's not your thing! Name-checking a few folk who tend to give solid advice, with thanks @DNA3000 @will-o-wisp @MegaSkater67 @DrZola @Lvernon15

I'm a fairly slow FTP solo player; gaining a few extra awards from running a one-Man Alliance. My big blocks are my slow acquisition of T2A and T5B, so getting champs to R4/R5 is very slow. On the plus side, I don't really need defenders; and Prestige simply isn't a thing for me at all. I don't run suicide masteries.

I completed Act 5 a while back; and have been kind of put off from attempting Act 6 due to the 5* Gating, and the obvious general discontent on the forums about various aspects of it. So I've been exploring Act 5 and dipping into the Variants.

However, I've started to build up a bigger 5* roster, including some counters for the big Act 6 bosses I've been reading about (notably a 4/55 Warlock just one T5B away from maxing out) and I'm not far off exploring Act 5 as Elders Bane; so it seems to me that Act 6 beckons. 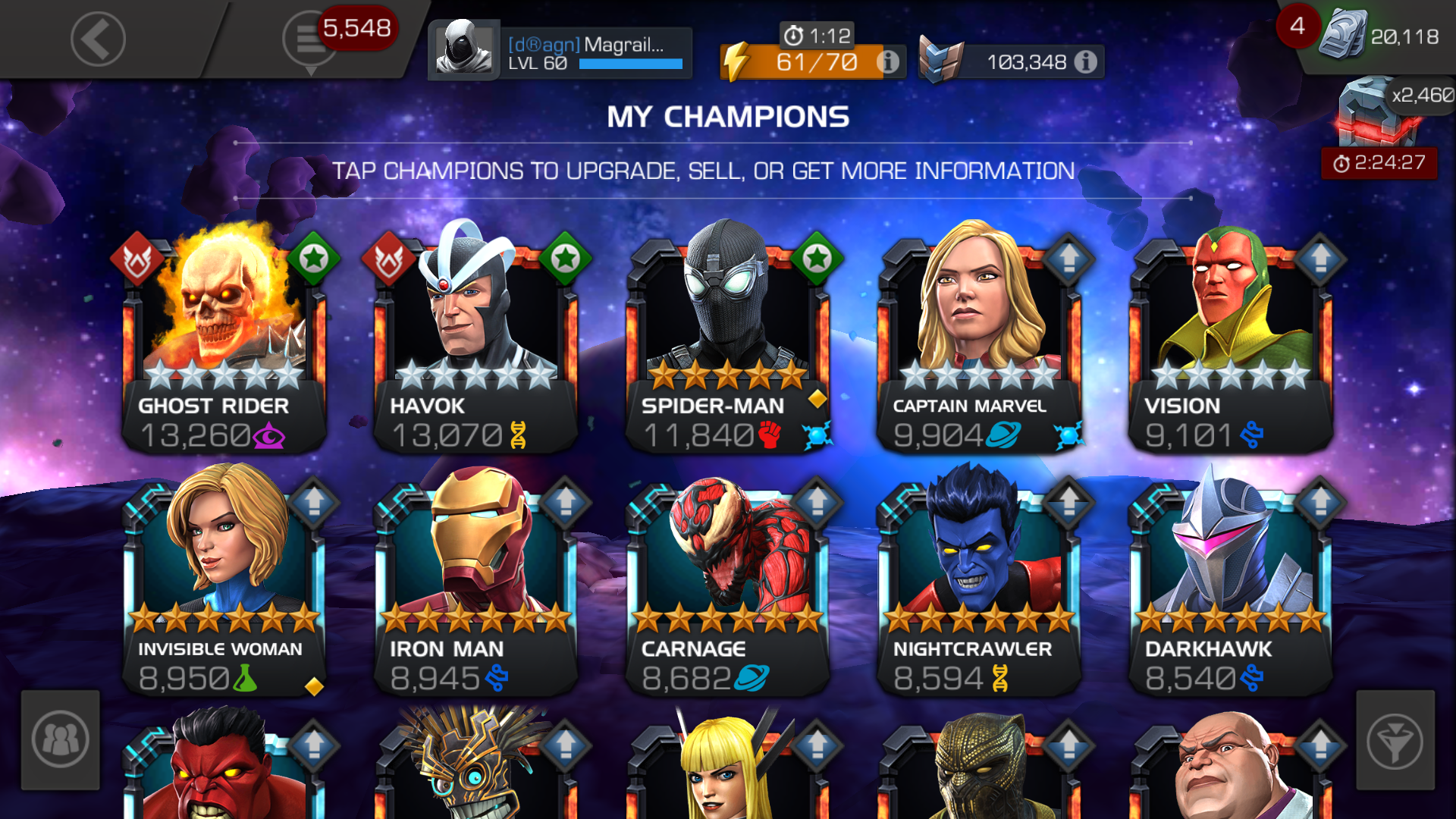 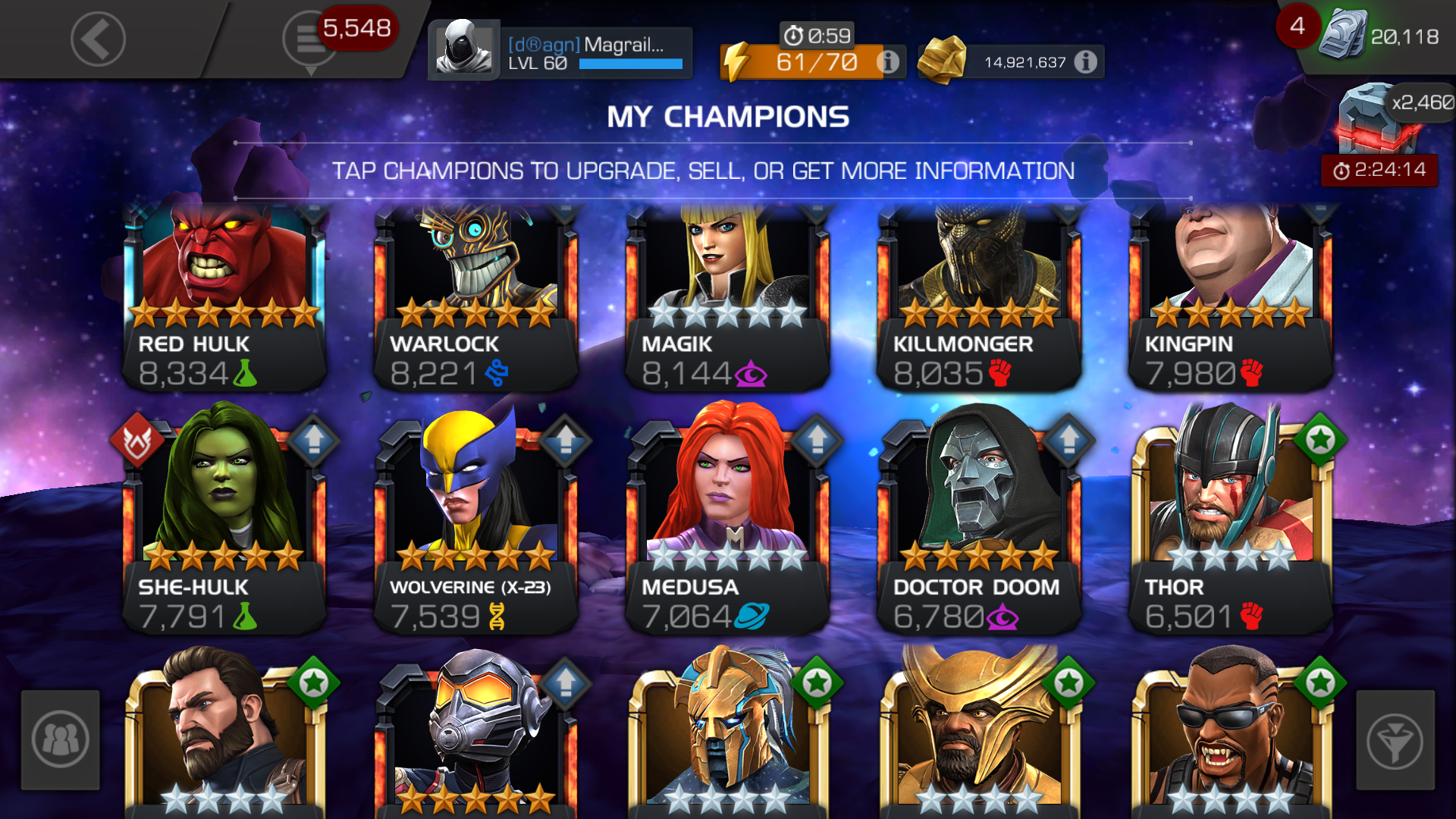 Clearly I've got a few heavy hitters, and some solid Power Control/Immunity options, although my best immune champs are robots, which can be disadvantaged with certain nodes. My DoT champs are a bit more limited (mainly a 4/55 X-23, and 6* 1/25 Carnage), and I don't have much buff control. Some utility provided by GR, Warlock, Stealthy and She-Hulk.
I've pulled several decent champion options in the last few months, but can't rank them all up; and the question is: how would you recommend developing my team further for Act 6 and Variant content, given fairly limited rank-up resources?

Importantly, I do have 5*Awakening Gems for Mutant, Tech and Mystic available; plus I can probably get another from rifts. I don't plan to turn on suicides, and lack important synergy options like Nick Fury, The Champion and Heimdall above 4*.

Looking at the champs I haven't built up yet, the most obvious options to build up and/or Awaken (as well as the obvious CMM and Warlock) are:

Strong stand-alone options: If people can offer explanations that'd be great. I've been around long enough to know that Domino is a great champ (as are most of those I've mentioned); but given that I've already got a 5/65 Havok and a 4/55 X-23, is she really my best bet? In Act 6 and Variant content, might Colossus, Omega or Sabretooth bring more to the team?

Likewise, with a 5/65 Ghost Rider, 4/55 Vision and 4/55 Magik (who has a really solid synergy with Warlock) available and ranked up already, is Dr Doom (Awakened or otherwise) really going to be a transformative champion? Or is he genuinely so good that I'm crazy to even consider Awakening Dr Voodoo instead?

If you were me, which 2-3 champions would you be taking to R4/R5, to get to grips with Endgame content?

Thanks for reading (those of you that stuck with it this far! 😉) and for any advice you feel like giving.