My_Superior Posts: 2,086 ★★★★
May 16 edited May 16 in General Discussion
Okay first off, My_Superior is my forum name. If that puts a chip on your shoulder, please hit that disagree button and get gone... Still here? Alright let me explain why I think Tier 5 Alliance War killed my alliance and maybe, on a larger scale, is killing the Contest of Champions.

The jump in difficulty from Tier 6 to Tier 5 is way too high! The map switches from “Hard” to “Challenging.” This alone is a respectable spike in difficulty for your average player. Not only do the defenders have an average of 50% extra base health and 25% base attack (ignoring boss nodes) but the unique nodes become much more difficult; Aegis Heavy gets 4 charges instead of 2, Psychic Thorns actually starts to hurt, Limber nodes pop up outta nowhere, and the boss nodes are especially potent to name a few differences. Alright, this is acceptable when moving up to a new war map. What’s not acceptable is introducing Defence Tactics at the same time as the new map! This creates a giant hurdle that many if not most summoners cannot jump. They instead run straight into it like a brick wall and fall face first flat on the ground. Asking your average players to adapt to both a new map as well as ever-changing defence tactics when before they were just meandering along in Tier 6, to put it frankly, is cruel. 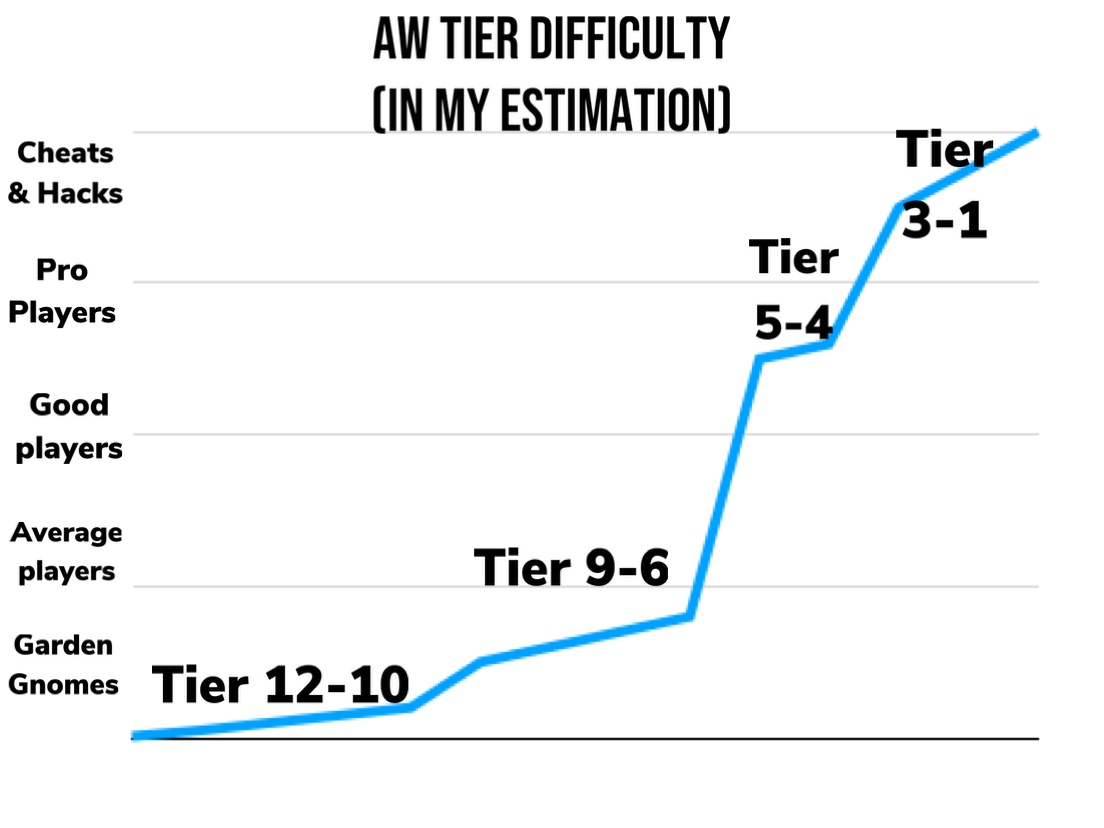 In my estimation as seen in my graph, there is no tier of alliance war that naturally fits a good player; tier 6 is too easy while tier 5 is way too hard. This leaves a huge portion of the player base in a no man’s land regarding Alliance War and it discourages them from wanting to compete. A few players in my alliance quit for this reason. They were burnt out, didn’t enjoy Alliance War at all, and left. Other players left because they weren’t happy with our failure. Regardless, both types would have probably stick together if the difficulty curve was smoothed out over more tiers instead of drastically spiked at Tier 5.

It’s clear to me that Alliance War Tiers need to be retuned. I don't know the best way to do it but I do know the current way isn’t any where near it. Please for the love of Odin balance them out over the 22 tiers instead of focusing all the difficulty and rewards into the top 5.

Alright ‘nuff said. Thanks for reading.
8