Cavalier difficulty breakdown, the Good, the Bad and the Ugly - TEXT WALL incoming

Mauled Posts: 2,644 ★★★★★
September 2020 edited September 2020 in General Discussion
I'll preface this with the comment that I'm approaching this from two perspectives. Firstly as a pretty endgame account and I'd like to think I'm pretty good at the game now. Between my 5/6*s I'm only really missing Quake and Magik (that I really want) and I'm sitting around 27 R5/R2 - so I can cover 99% of what the game throws at me with my roster, except that 6.3 Mysterio. The second perspective is from my 4* Roster which is truly pathetic as I was gifted with fantastic 5* from my very first so I never bothered investing or ranking them up - I have 10 R5 4*, so in terms of utility I have a pretty limited roster, I figure that factoring in my experience, this probably equates to new Cavaliers getting through with a limited R4 5* roster. For the 4* challenge I didn't want to rank up any champions so that it would be as 'authentic' as possible, so there was a lot of shoehorning with my teams, they weren't optimal, I had a bit of luck in having NF, Medusa, CapIW and G2099 ranked up already or I think I really would have struggled. 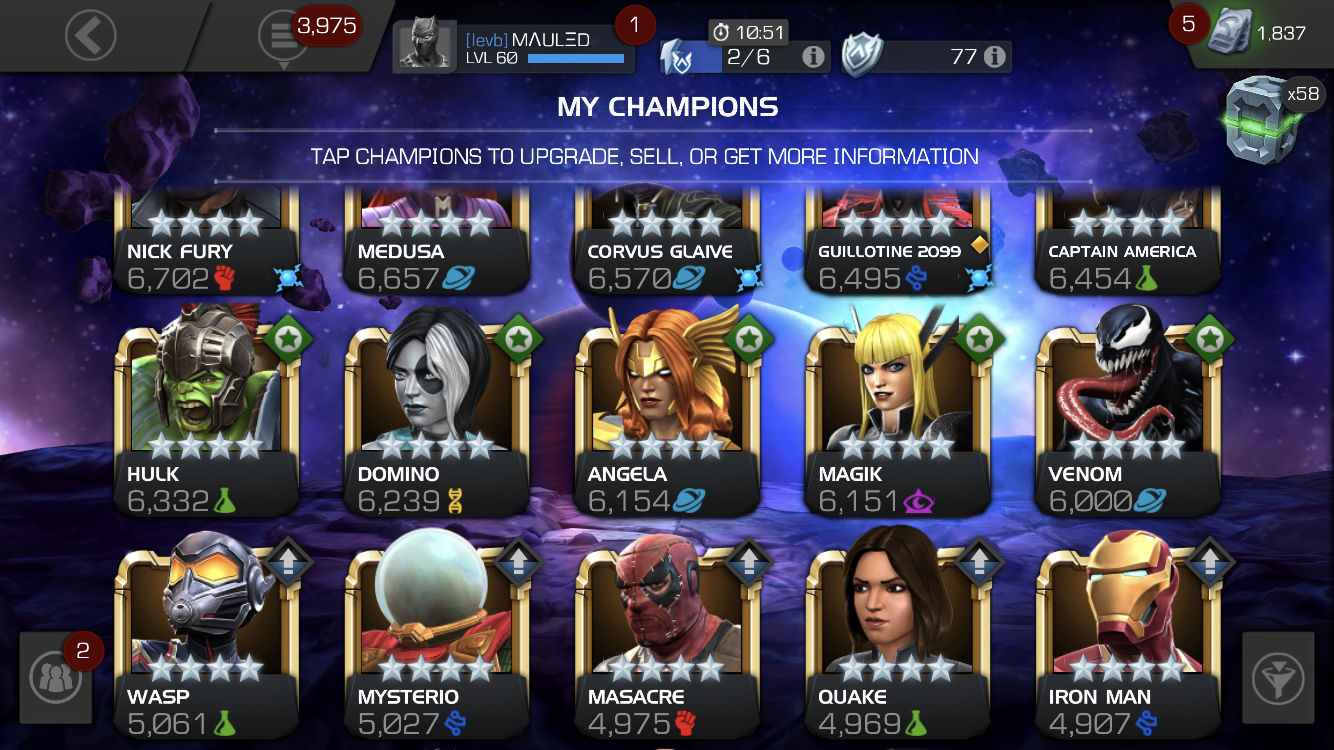 THE GOOD
I think Kabam are going in the right direction with the node design - the positive nodes to encourage certain play styles was brilliant and should be feature more elsewhere in the future, with the exception of the Tech and Mutant one, they were red herrings and I just ignored them. For the most part the class nodes synergised fairly well with the path nodes and the boss encounters didn't require anything completely counter to the team that you needed for the path. The attack values were reasonable, and the champion/node placement was quite intuitive for the most part - there weren't really many placements of champions that just didn't make sense.
I really liked the idea of the special objective, it adds a level of spice to players who are at the endgame and the final reward at the end is equally spicy. I would have liked a selector but that's probably me being greedy. I'm not sure what direction they're going to go with these next month but honestly I would be up for more 4* challenges though 4* are a touch expensive to rank for what you use them for. I'd do a 3* challenge for a fully formed T5CC *wink wink*.
There were four exceptions to this in my eyes: the Medusa and Magik quests and the Warlock and Scarlet Witch bosses. Some of this is picky - namely the two bosses, but the others isn't.

1.1 - Warlock
The first quest I thought was fun, I don't mind polka dot power and most skill champs cause DoT and it was easy enough to bring a meh champion up to a good power level with the expired debuffs (I explored a lane with classic BP for fun later and he was doing good damage). My only problem was with the Warlock boss. Now I'm not a fan of fighting him in general to be honest, I just don't enjoy degen. I found him/it? to be the hardest fight outside of Apocalypse because you really do need someone like Medusa, Vision Aarkus or I guess Magneto (yay!) to turn him off. I got about 60% off on my first try with Medusa, ultimately degenerated killed me when my armour shatters failed to reapply.

1.2 - Medusa
Diss track is annoying at the best of times, it limits the pool of champions that you can use massively. The likes of a high sig Cap, Nick Fury, Human Torch or Void are probably the best options, I suppose you could shoe horn someone like Black Panther into the mix but let's be honest, a lot of the other high-debuff applying champions are pretty meh. I breezed through this with a combination of my NF and CapIW, though parry-heavy for close to 1.2m hit points with a 4* was pretty tedious. If there had been something attached to the science node that let you debuff on intercepts or parries or something like that, or even a player version of close encounters for example (keep close and apply debuffs over time), I think it would have been a far more enjoyable experience. Also, shifting immunities and diss track should never been present at the same time. Frankly shifting immunities is just a bleh node. I used NF and Cap for Medusa, she was easy enough to deal with without having parry active.

2.1 - Scarlet Witch
Scarlet Witch was on the tech quest - no problem with that, poison immunity can be important for her and a lot of techs are double immune, makes sense. What didn't make sense about this fight to me was putting footloose in combination with the nullify node. All of the best counters to footloose and SW together aren't tech, realistically the best counter is either CapIW, She hulk or power locking. If this had been on the science path, I'd have said great, spot on. She wasn't a particularly hard fight, just slow with the crit resistance. I used Magik for her as I don't have her as a 5* and this was a chance to play with different toys. It took me over 300 hits but I did get the one shot. It's not a bad fight, I just don't think it meshed very well with the theme of the quest.

3.1 - Magik
I think that putting Biohazard over an entire map was a bit much, especially with the mutant global being virtually pointless as it didn't seem to actually work with OR, who's pretty much the only mutant who can survive it. Ultimately I did it with my 4* G2099 - my only bleed immune - and it took me a couple of attempts to do that line. I approached Magik knowing that I didn't have a proper counter to her and that it was likely that a single cycle of her limbo damage would probably kill me. I used Magik for her, I pushed her to 90% of a bar of power and basically parried to two bars of power (RIP my health bar), then SP2 intercepted her and did stand up intercepts and backdrafts once she was cornered. She took me 4 revives total I think.

THE UGLY
This paragraph could also be in good to be honest, as divisive as it is. I didn't mind how the rewards are now spread out across the chapters, I can see the logic behind it too - I think the idea is that the player completes and explores ch1, then ch2, then ch3 rather than getting completion then exploring ch1/2. My biggest problem with this is that outside of Professor X and Apocalypse there was very little differentiation in difficulty between ch1 and ch2 in terms of the bosses then it jumped through the roof with Magik. I think that there's a reward balance between a player doing 7 runs through ch1 and 1 run through the whole MEQ that needs to be adjusted in favour of completion because let's face it, we all want to complete the quest.

To clarify, I like the new structure, but not the balance. If I'm honest, the rewards could be buffed a little bit to make it more enticing, I explored it for the T5CC, not the shards. I think a more generous sprinkling of 6* shards and 5* sig stones would have been good. I think that a good balance between the two reward structures could be to give the harder paths a hefty path reward, so you can balance easy and hard completion with immediate rewards or taking the easy route to get the measure of the boss and coming back later for extra loot.

My final marks - 7/10, rewards could be spicier, I think it's a good start and we should remember that this is only their first iteration, I fully expect that there will be tweaks next month.
7