Book 2 - Exploration/Counters/Tips/Loot from a noob.

3) Masochism/Double Down: Nick Fury unblockable makes masochism irrelevant.
4) Invade: Corvus, Massacre, ramped up Aegon
BWCV: Ghost, CapIW, Shehulk. I got a solo with Wasp when I messed up path.

5) Turtling/Chitinous Thorns: Corvus, Hyperion, CMM
6) Pleasure to burn: Torch, Hype, Sunspot, Ghost. Basic attacks can incinerate so no specific champ
BWDO: Corvus, NF. This is more mechanically challenging than specific. Got to get the stun down.

1) Encroaching Stun: NF ignores, Ghost, HT for Manthing
2) Destructive Feedback: Ghost, NF. Learn the mechanic and anyone can do.
Venom: Sym Supreme, Doom, Longshot. Be aware of armour up buff melting you

3) Static Blast: Ghost and Hype. Again, no specific champion requirements
4) Vivified - Any science can do this. I used Cap with synergies as consistent debuffs.
Rhino: DoT heavy champ makes this a cake walk. NF and no specials just bleed out.

1) Polka Dot Power: Any DoT, AA would be perfect, I used Torch as I was bored of AA
2) Energy Adoption: Ghost, bring Warlock/G2099 for Havok. HT, Potentially Havok
Juggernaut: Basic hits can poison so Ghost is viable, G2099/Warlock w/Ultron, any poison immune

5) Ghost, stagger/nullify. I found most annoying to be BPCW and Civil Warrior
6) Aspect of War: Aegon, NF, Hitmonkey. Any skill. This is actually really fun
Weapon Flex: Warlock, AA. Anyone who poisons in theory.

1) Spite - Anyone that’s not buff heavy. Tranquility should neuter powergain before sp3. I took Blade for Magik and Dormammu.
2) Energy adoption Fire: Hitmonkey, NF. Any skill champ can do this fairly comfortably
Punishing Angel: AA bypasses much of the difficulty here. Ghost, if you dex special in phase it counts and is safe. Parry, SP2 rinse and repeat - this makes it a bit like Powershield.

3) Terminal Velocity - G2099, Guardian to ignore node. Any buff heavy champion to counter. I used G2099 for all except Magneto (Hyperion)
4) Warlock, G2099, Ghost. Any tech neuters Lifecycle’s healing factor.
Electro Luke: I used OR. Namor. Got oneshot and the second was messy. Be aware of unblockable specials thrown into your block and the falter can screw you so count your hits. In theory I think Falcon locked on and Gambit.

5) Do not go Gentle - Ghost is designed for this. Immediately punishing a medium counts as an intercept. Oscillate makes intercepting a lot more consistent.
6) Unlimited Power. Ronan cheeses this. I have a sig1 R4 who managed the whole path. I’d be tempted to bring Ronan just for Terrax if he’s your bogeyman. Ghost out-damages the buffet quite comfortably
Night Carnage: Ghost destroys this. I don’t see why slow play with AA wouldn’t do the job. Be aware of evades and can’t switch him.

1) Particle Protector: XL champions, especially Antman. I used Warlock but found him very slow. AA for Sasquatch
2) Destructive Feedback: I used Magneto for DH. Leave him at just under a bar of power for the reflect phase, just in case. Ghost makes the mechanic easy and makes P2099 fairly safe, Hyperion and Proxima handled KM quite nicely.
Ice Phoenix: Ghost, NF starting in first phase to tank the damage would do the job nicely too. Nothing specific here other than being aware of the coldsnap damage at the start and encroaching stun.

3) Footloose: CapIW destroys this. Shehulk/Stealth also good options. Heavy-based champs will annihilate. No real hard champs here.
4) Clapback: AA can get through it. Cap, Torch, Doom and Warlock are probably best counters. Ghost can outdamage the buffet but it’s pretty big.
Spider Witch: Ghost destroys here with backblast, you don’t even need to use specials once you start hitting hard. Otherwise incinerate immunity advised. Inverted specials are simple enough but easy to catch you out. NF might not be a bad idea in first form as that shouldn’t trigger backblast.

5) Biohazard: OR/Colossus/Ghost. The usual suspects.
6) Recharge/Powershield: Ghost, anyone can do this, I used Ghost because of the unblockable specials and I was tired by this point.
Gwenperion: Ronan can fully cheese this. I did it with R4 though you have to use SP3 to fully get it down because of the energy damage heal. I’m going to try G2099 later. There’s no Sp3 to deal with just be aware you will die if you get clipped with SP2. You can also chip and back out.

Thoughts
I really enjoyed it. It was fun and made me think about different champions to use rather than being forced to use certain champions. It’s a nuance but it’s an important nuance to pay attention to because I think this is where Act 6 went so wrong. Sure, you’ll see that I used Ghost and NF for a hell of a lot of this but that’s because my Ghost is a fresh R3 and I love playing her and NF is one of my favourite champions too. Ultimately, I think I used nearly all of my R5s at one point or another in this and if I hadn’t been in a hurry - I accidentally opened the Act 6 compensation so had a lot of refills to use - I’d have probably used a wider range of champions.
There were actually no parts of this that I sat down and thought wow, this is total (insert four letter word of choice), which was my general state of being for much of 6.2, for example. The electro Luke is probably the closest to that but I was able to solo him with OR with no suicides and Aarkus also has a fairly narrow set of counters.
The other thing that I think is really good about this is the different boss choices. This is effectively 18 quests rolled up into one chapter, there’s less repetition and in the case of having no counter to Aarkus, you’ve only got to brute force him twice.

Could it have been harder? Yes it could, but equally this is a game designed for fun. What they have done, at least in my opinion, is got the difficulty curve back on track with how 1-5 was. Act 6 is a huge blip in that curve but ultimately Book 2 rewards you for completing/exploring Act 6. If you ran from Act 1, straight through to Book 2, this would be far more challenging, but the reality is I’ve got the best counters for pretty much everything the game can throw at me so a lot of it’s down to planning anyway.

I was able to form my skill T5CC with the selector and bring Aegon to R3 so hopefully that’ll make my last 3 paths of AoL a lot cheaper and the sig stones for Ghost are going to make her far more user friendly, especially as I’m used to a max sig 5*. My Nexus options were pretty meh, I went with Terrax as if I awaken him I’ll take him to R3 for defence as I’ve got 2.5 Cosmic T5CC anyway and nobody to use them on. 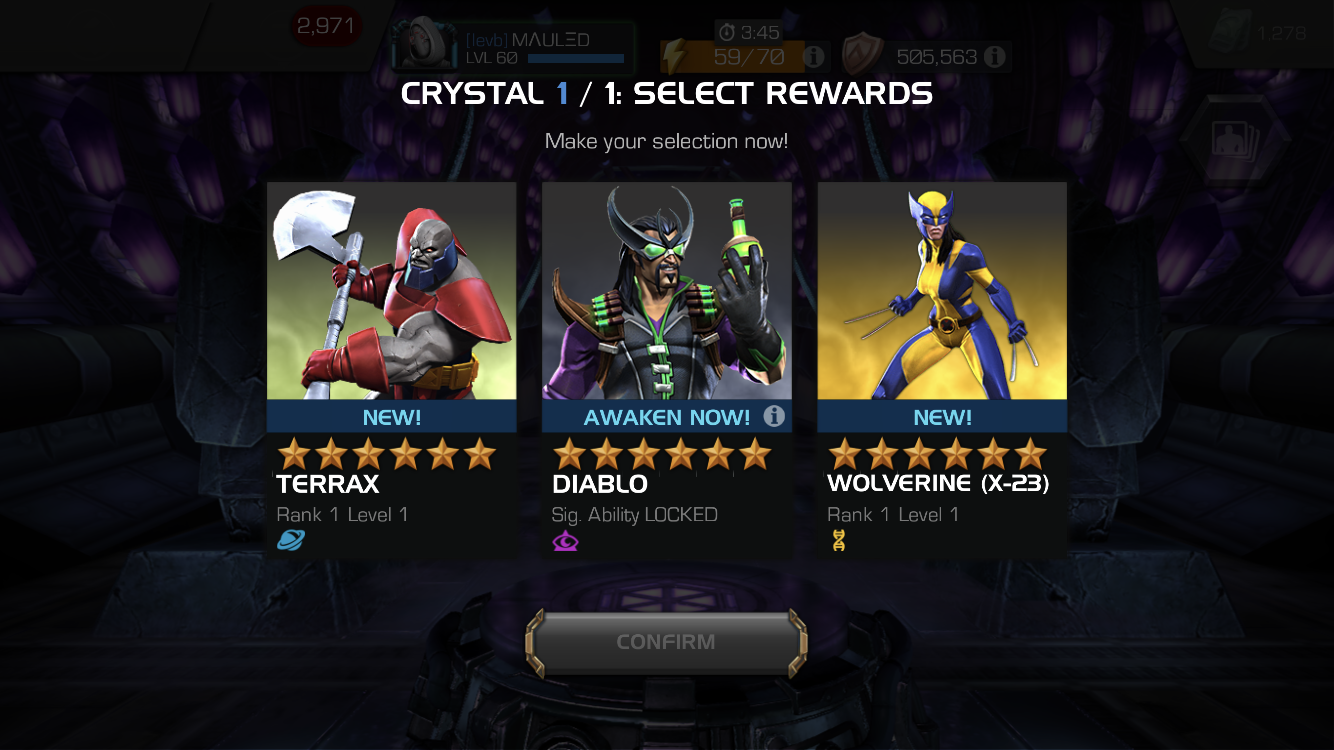 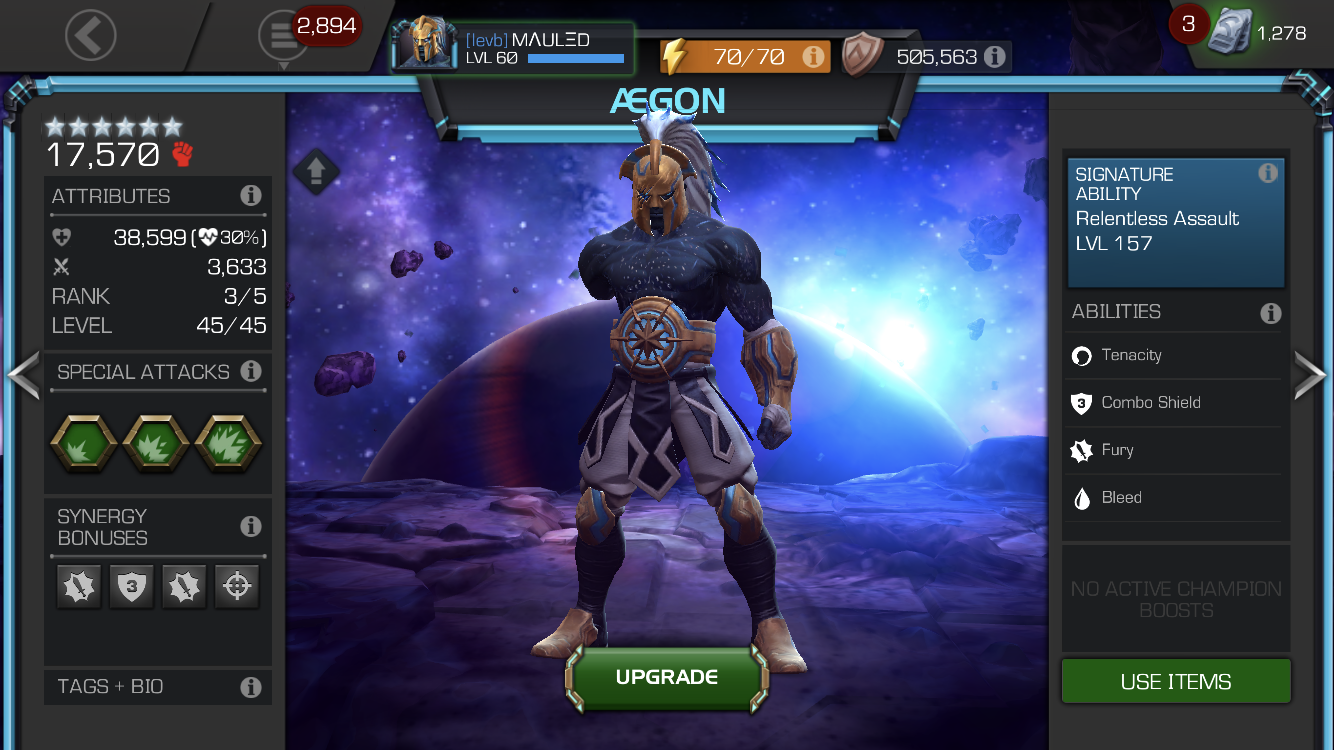 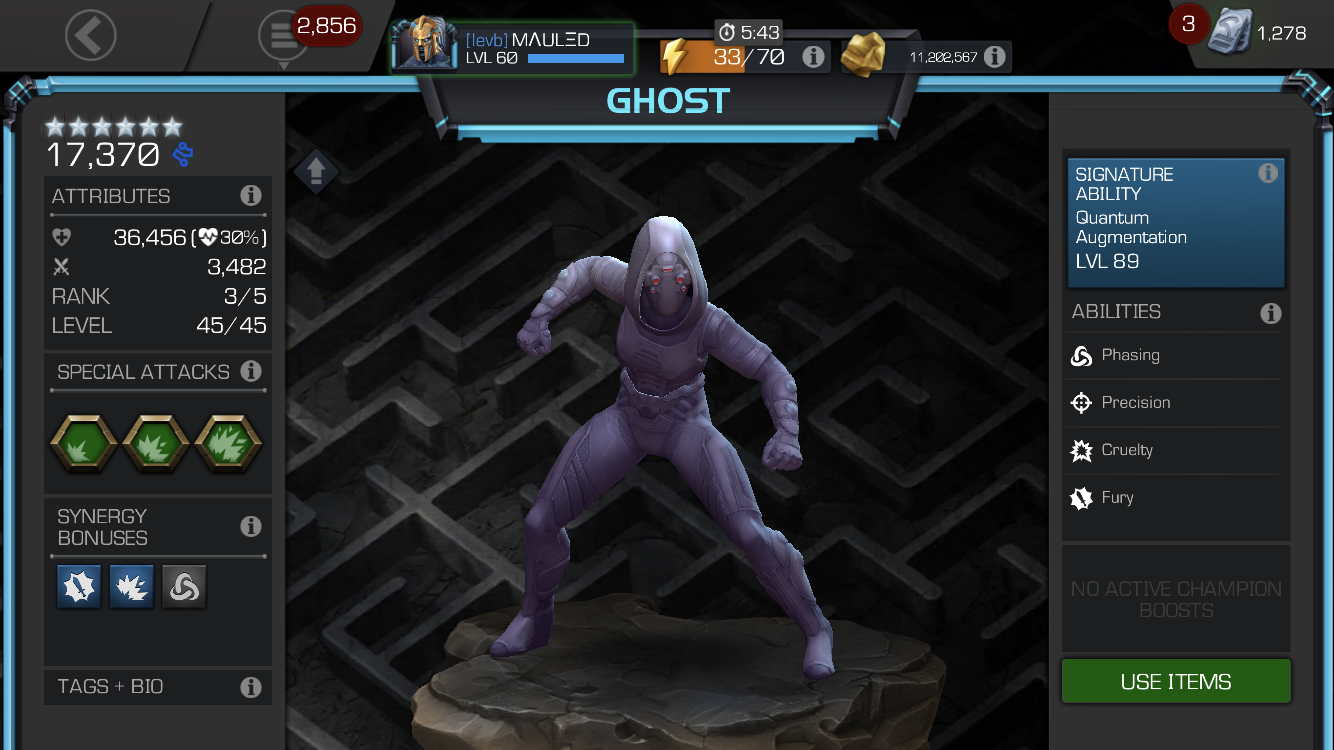