Steel_Ball_Run Posts: 504 ★★★
July 27 in General Discussion
I don’t see a lot of people talk about him (with mostly good reasons), so as an owner of a r2 duped 6* Mangog, I figure why not write a guide/review on him

Overview:
-His playstyle is like a combination of Air-Walker, Sasquatch and Dragon Man
-Aside from Health, his base stats are pretty garbo
-Good prestige if you’re into that
-Great with suicides

*He gains 40% less Power from hitting/being hit by enemies, instead he gains 5% of a bar of Power every second while below 2 bars

*His main gimmick is to build up Hatred (he starts with 3)- that purple charge in the corner, there are a few ways to do so:
-Land/get hit by a 5 hit combo, this is your main way to build Hatred (this needs to be a full combo, not just every 5 hits, so watch out for evade champions)
-Nullify a buff (note that you can’t gain more than 1 Hatred every 0.2 seconds)

*Each Hatred grants Energy Resist, Armor and Crit rating. Really useful since his base Crit is atrocious

*Once you build up to 10 Hatred, activate a special to become Enraged for 10 seconds:
-Specials are Unblockable and you become Enraged immediately after launching one, so don’t worry about finding an opening
-While Enraged, you gain an indefinite Unstoppable buff, this is removed if you get hit by a special attack
-If you get hit while Unstoppable, you gain a big Fury lasting 10 seconds (this plays a big part in his damage rotation)
-You take 50% less damage from enemy hits and Recoil mastery (pair this with his Bleed Immunity means he’s ideal with suicides)
-While Enraged, each hit has 70% chance to inflict a stacking Stagger
-Each time Mangog gains Hatred, Enraged is paused for 3 seconds. If you want to Nullify a lot, spam SP1 while Enraged and go ham on the opponent
-After Enrage ends, you lose all your Hatred

*Heavy Attacks:
-Heavies can be held for an extended duration and deals more burst damage the longer you charge it
-If not Enraged, consumes 2 Hatred to inflict Armor Break. I don’t find it particularly useful, just save your Hatred for specials
-While Enraged gain +220% Power Gain while charging
-Longer charge = more power gain + bigger damage. The window to use this to its full potential is pretty small, more on that later

*Specials:
SP1:
-Grants 2 Hatred
-The second and final hits inflict Stagger
-You can dex it if you’re fighting him on defense
-If Enraged, he gains a 15 second Energy Protection buff which grants him immunity to Incinerate, Shock and Coldsnap. This buff is paused while Enraged (good for Energy Adoption nodes, especially with his high Energy Resistance at max Hatred)

SP2:
-Each hit deals extra bursts of energy damage
-The first hit steals the opponent’s power above their nearest bar (similar to Doom). For example if they have 1.5 bar of power, he steals half of it, leaving them with 1 bar left
-If Enraged, the last hit Stuns the enemy for 3 seconds, this Stun is removed when you hit them. Use this Stun to charge your Heavy instead of just button mashing
-Good luck dexing it lol

SP3:
-Nullifies up to 10 buffs
-Gains a small Regen buff, each buff nullified grants extra healing
-If Enraged, the last hit Stuns the enemy for 2 seconds. This Stun won’t be removed when you hit into them
-You most likely won’t use this special often, just stick to the rotation, speaking of which…

*Damage rotation: That’s right, it’s the moment you’ve been waiting for
-Build up 10 Hatred, use SP1s if necessary
-Use SP2 when the opponent’s just below 1 full bar of Power. Mangog will become Enraged and the last hit will Stun the enemy
-Charge Heavy, by the time the Stun ends you’ll get max charge
-Let them hit you once to gain the Fury, the Heavy will be automatically released = big damage
-If you can, launch another SP2 (*)
-Repeat 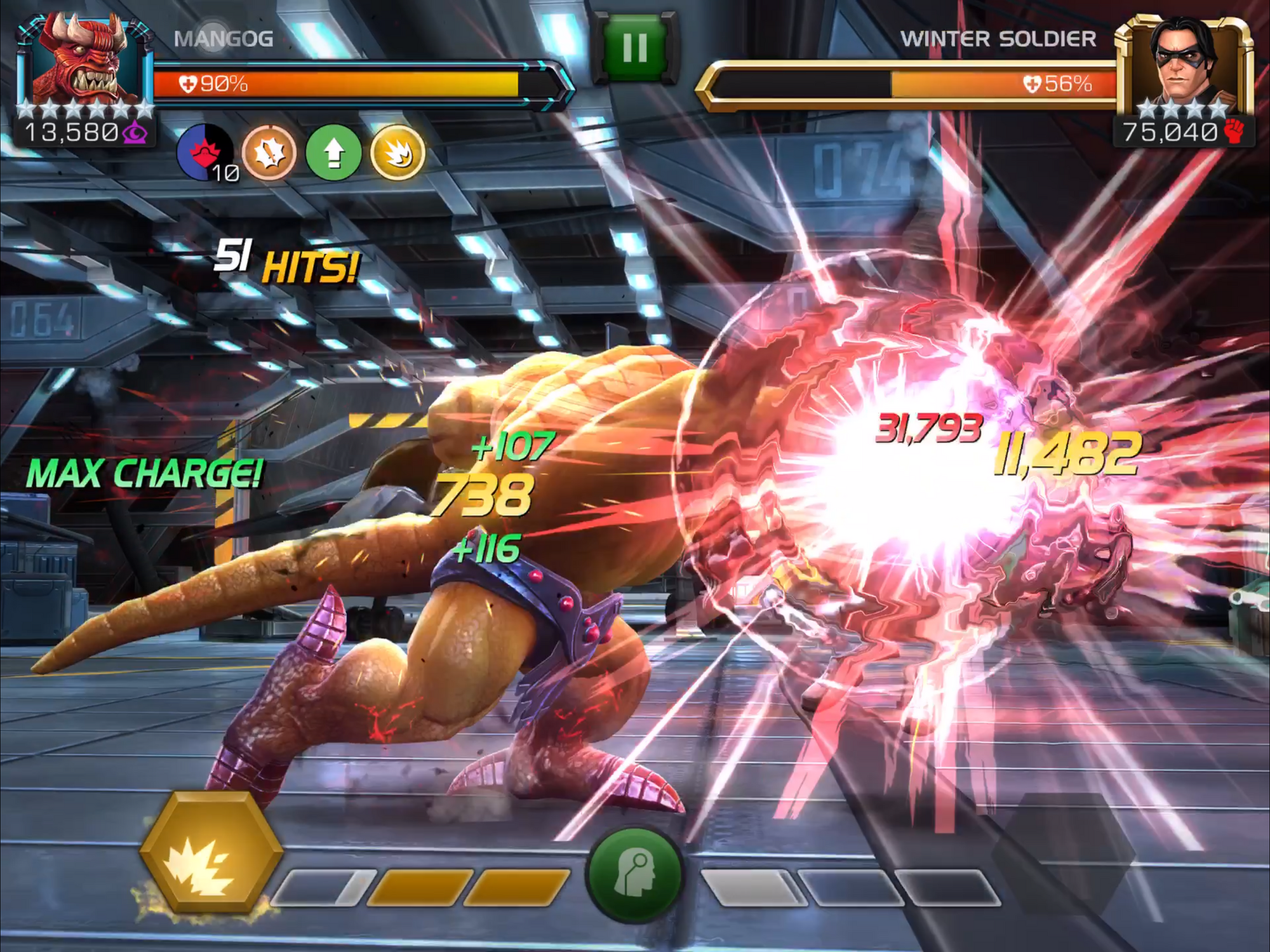 *Synergies:
Nothing too important, but I like to pair him with iHulk/Kingpin: When becoming Enraged, Mangog inflicts the opponent with a Suppression debuff, reducing their defensive power gain. This helps with (*), he can Power Steal while the enemy still has less than 1 bar -> another rotation

*Sig Ability:
-Each time a Stagger expires naturally on the enemy Mangog has a chance to gain 1 Hatred. The chance is pretty low (14% on a sig 20 6*) so it’s pretty much useless
-While Unstoppable, Mangog Regenerates a certain amount of incoming hit damage instantly
-Gain extra Attack and Crit Damage per Hatred. Nice boost to the low base attack and his already big SP2/heavy bursts

*Cons:
-His damage rotation doesn’t give enough room for his main utility
-His base attack is low
-His playstyle takes a while to get used to and is pretty clunky
-Long build up for short damage window. This is his main problem imo, if they increase the Enraged duration and have his SP1 give like 3-4 Hatred stacks he’d be much better
-Weak against: Stun immunes, Evade/Auto-block, enemies that mess with your power


Overall, Mangog offers good damage and utility, but at the cost of not being able to get both at the same time. His playstyle is unique (for better or worse depends on the player’s liking) but his build up is too long. He falls in the category of getting one Tune-up away from being great and ultimately coming in at a 6.5 angry mangoes out of 10